How society and horror films go hand in hand 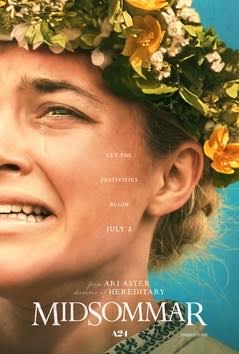 Midsommar subtly hints the themes in society through showing a journey between a girl and a Swedish cult.

The orchestra comes to a deafening crescendo then abruptly stops. You sit there thinking there is nothing in the dark, but then BAM! The main character turns around to a face something only seen in nightmares.

People have paid for movie tickets to sit and get scared for two hours for more than a hundred years now. Scientists have come to the conclusion that society enjoys watching these terror-filled movies due to their comforting value. Social scientists believe that horror movies are enjoyed for three factors: relevance, tension and unrealism.

Some people enjoy the tension and adrenaline rush caused by these motion pictures. On the other hand, some people watch these movies with the mindset that the film in front of them is completely fiction. But for most of the population, the horror movies connect with the audience due to their underlying themes that relate with people and what is happening in society all around.

The genre of horror has existed for centuries, but it wasn’t developed into a film until Le Manoir du Diable by Georges Méliès in 1896. This two and a half minute film was the catalyst for many more terror-filled films. Directors started to make adaptations of classic horror novels in the early years of the twentieth century. From The Phantom of the Opera to Frankenstein, creatures of classic novels displayed across the big screens.

Horror films met their real debut when director Alfred Hitchcock started being called the “Master of Suspense.” Hitchcock used certain cinematography techniques, making the audience fully immersed in his films and poised on the edge of their seats.

“Alfred Hitchcock’s Psycho is probably my favorite scary movie out there, mainly because of how the thrilling camerawork and soundtrack enhance the story,” said senior Sophie Peineke, who is in Clark’s advanced cinematography class. She said Hitchcock’s horror movies have become more advanced in terms of visual and special effects compared to the other films during this time. His films always carried some supernatural aura around them, which reflected the spiritual awakening during the fifties. “As gross or scary as his horror movies can get, I feel like there’s comfort in being really scared but also the reassurance that none of it is real,” Peineke said.

As mistrust between capitalist and communist countries started to rise during the start of the Cold War and into the 1960s, and horror films didn’t miss a beat to enter those themes into their films. Films during this time held many satanic undertones, due to many pagan and satanic cults being founded during the sixties. Between The Haunting to Village of the Damned, the ’60s defined an era of witches and satanic cults.

Rosemary’s Baby by Roman Polanski was able to capture the tension of mistrust that was around the world. CSUN film student Nicole Azzo said that Rosemary’s Baby is a film that not only deals with a very common horror villain (witches, satan, etc), but one that deals with the concept of mistrust. Losing the sense of trust with not just anyone, but a spouse. “The person you sleep next to at night. The person you’re supposed to trust with anything and everything. How could that person turn on you in such a sickly way? For their own benefit?” Azzo said. “That’s scarier than any witch, monster or ghoul out there.”

Throughout the ’70s and ’80s, there was the creation of slasher movies. Slasher movies are a genre of horror movies often defined by a group of usually teenage victims being killed by a bladed tool. John Carpenter’s release of Halloween was the first Slasher movie, and many followed after.

Senior Nareh Haroutonian, who grew up watching horror films, said that this is the scariest genre of movies because it is more likely to happen. “There is a sense of some supernatural being in Halloween, but the fact that you know Michael Meyers is an actual person is irksome,” Haroutonian said. The subgenre only lasted six years, ending in 1986. These horror movies were deeply influenced by several murders occurring between these two decades. These horror movies depicted the reality that murder can actually occur, unlike some of the common creatures like vampires or Frankenstien’s monster.

As society moved away from slasher movies, horror films started to be based off of literature again, more specifically Stephen King’s stories. King’s horror novels dominated horror movie storytelling for almost three decades, but peaked in the late ’70s to early ’90s.

Senior Raymond Shamiryan said that King was able to create so many scenarios that caused bone-chilling reactions. “My favorite horror movie from King is The Shining. The Shining is a film with incredible acting, and iconic characters, legendary one-liners. It’s a timeless film with a unique story,” Shamiryan said. King was able to create stories that seemed realistic, but he always added a supernatural element to all his books.

The most common horror movies in the 1990s and early 2000s were horror comedies or parodies such as the Scary Movie franchise. Other common genres were movies that dealt with paranormal issues such as Paranormal Activity and The Conjuring. Found-footage horror movies were also common as a result of the Blair Witch Project. Other franchises like Final Destination and 28 Days Later dealt with threats based more on reality such as pandemics or malfunctioning technology.

In the late 2010s, movies about cults started to rise. Cult movies often draw a fine distinction between a nonconforming group and a “normal” group. They also symbolize fear of the unknown, specifically emphasizing the drastic differences between “normal society” and those who differ from societal norms. UCLA horror-film enthusiast Emmily Hovhannisyan said by exaggerating this divide, cult-based horror movies show the conflicts that emerge between the aforementioned groups. “For instance, in Midsommar, the Swedish cult is differentiated from the American graduate students both in behaviors, costumes, languages, and more,” Shamiryan said.

This “fear of the other” could symbolize racial, political, and national divides in real life. Cinematography teacher Joshua Bishop said that these horror movies certainly have influenced how people act, dress and behave around others. “Our society is divided now more than ever, and cult-based horror films sometimes find a way to expose what is happening around us,” Bishop said.

Horror movies are always easy to access, but what makes a horror film fit its definition? Besides having an obvious fearful nature, the narrative has to be original and carry an effect that makes the audience think about it for nights to come. Although jump scares and monsters make the basis of the film, the dialogue also has to carry some eeriness to it.

“A good horror film idea is anything that is effective in its scares and narrative, but the script is the backbone of any film,” Azzo said. “If there is no script, there is no movie.”