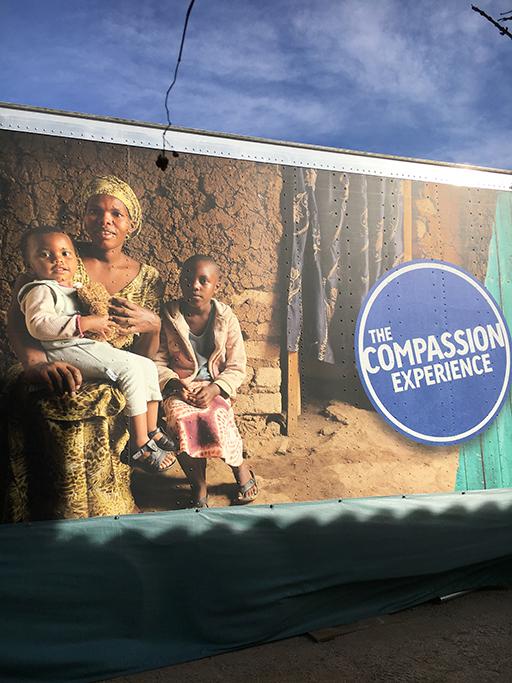 I entered a small room filled with stars in the sky and tall grass that covered the walls. As I listened to the sound of crickets, I found myself standing in a recreated field in which a little boy had worked since he was seven years old. I had entered the life of a young boy from Ethiopia named Samson.

He had worked alone for hours in harsh weather conditions and barely had enough food to eat. Abandoned by his mother at the age of three, he was raised by his aunt. “I was too much of a burden, even for my mom,” he said with a heavy heart.

This recreated scene is of part an interactive journey called the Compassion Experience, where I recently learned about the struggles and hardships children in third world countries face. Exhibits are built to replicate the markets, schools and homes of children living in poverty, making the experience feel more realistic. Participants use a headset and an iPod to listen to actual children tell their stories as they walk through their lives.

People get to experience the life of a child living in a developing country without leaving home. Stories of children from all over the world are shared in the Compassion Experience, a mobile event that comes to churches to raise awareness about children who live in poverty. The event is free and meant for people of all ages.

The Compassion Experience is a project created by Compassion International, a Christian organization that helps children through a sponsorship program. The sponsorship program is stated to be “the only child sponsorship program validated as effective through independent and empirical research,” according to their official website. There are over 4 million children living in extreme poverty according to Children International. The purpose of the project is to help the millions of children to grow into responsible and accomplished adults, as well as strengthen their relationships with God.

The event was an exciting way to view the life a child from a completely different world from ours, said junior Allysa Tubal. It was a fun and interesting learning experience that opens our eyes to the realities that children are faced with.

Two stories were offered for us to walk through: Yannely, a girl from the Dominican Republic; and Samson, a boy from Ethiopia. Both faced their own difficulties and struggles. We started with Samson’s first.

Samson was not able to attend school because his aunt couldn’t afford it. Until their next door neighbor had encouraged Samson’s aunt to enroll him in the Compassion Center located near their local church. There he was able to get free education, build a better future for himself, with the help of sponsors, and strengthen his religion.

His sponsors sent letters that encouraged him to dream big and supported him to accomplish those dreams. I had found some of those inspirational letters on his desk as I walked through the classroom.

Samson had hoped to get out of Ethiopia and become a poet, but in order to get into a good college he needed to pass his secondary school exit exam. He didn’t pass, and you could hear the disappointment in voice as he read the letter aloud. Instead of moving out, he decided that he could help children like him fulfill their goals.

The last room we entered was a woodshop and the walls were covered with pictures of Samson with giant smiles surrounded by his friends. Today, Samson is a woodworker and role model, helping children build a pathway to their dreams.

“I think it’s wonderful that people gain hope and inspiration from stories like these,” said Truman Harrington, a volunteer from the event.

Next up was Yannely’s story. The first room we had entered was her kitchen — a small, dark room. She shared that it was just she and mother living together. Her father had left after he found out her mother was pregnant. I stood there bewildered as to why her father would leave his wife and unborn child. He never wanted to admit that Yannely was his daughter; she couldn’t even use his last name.

“My mother worked many jobs, but no matter how much she worked it still wasn’t enough,” she said. With her mother constantly working, she was often home alone and only had one meal a day: a bowl of rice and a green banana.

As we continued on to the next room, she shared how her mother found the Compassion Center. Yannely was provided education, food, and an influential sponsor named Dorothy. As we entered her classroom, she described how outside the window she could see all the little kids playing on the playground, laughing, and smiling. It felt like I was actually there with her.

Dorothy and Yannely had built a strong relationship by writing to one another. Yannely had mentioned how she wanted to grow up to become a doctor, but struggled to take the high school exit exam because it is mandatory in the Dominican Republic that students use their father’s last name, which I found interesting. “My mother begged and pleaded the school for me to take the exam,” Yannely said.

Yannely was able to take the exam and pass. Today she is in med school studying to become a doctor. In her office, the blue walls were covered in pictures of her helping the children in her community and a beautiful picture of her and her mother.

Stories like these are heartbreaking to any person, especially a parent. For mother Salve Tubal, the stories were tragic to know that a young children suffer from starvation and deadly diseases, but in the end they became inspiring. Yannely and Samson persevered through their obstacles. Tubal hopes that people learn to not give up and not to lose hope in God. “Always have faith in God because he has plans for everyone,” she said.

While Compassion International’s mission is faith-based, many other nonreligious organizations help alleviate poverty as well. Children International is one of the largest  organizations that helps children in poverty through a sponsorship as well. Their program aims for children to “graduate healthy, educated, empowered, and employed,” according to their official website. Their belief is that education leads to less poverty, better health and peace, and that through these efforts the cycle of poverty can be broken.

I find it hard to imagine that children of such young ages face the struggles of finding education, clothes, or even food. According to Children International, there are about 6 million children that die from malnutrition before the age of 5. Some work from a very young age to make little money and barely get one meal. “Amazing to think that with the help of people that supported and motivated them, they were able to overcome their obstacles,” Harrington said.

“It is truly inspiring how Yannely and Samson pushed themselves to do their best,” Tubal said. “I would want to visit the Compassion Experience again to listen to other people’s stories.”