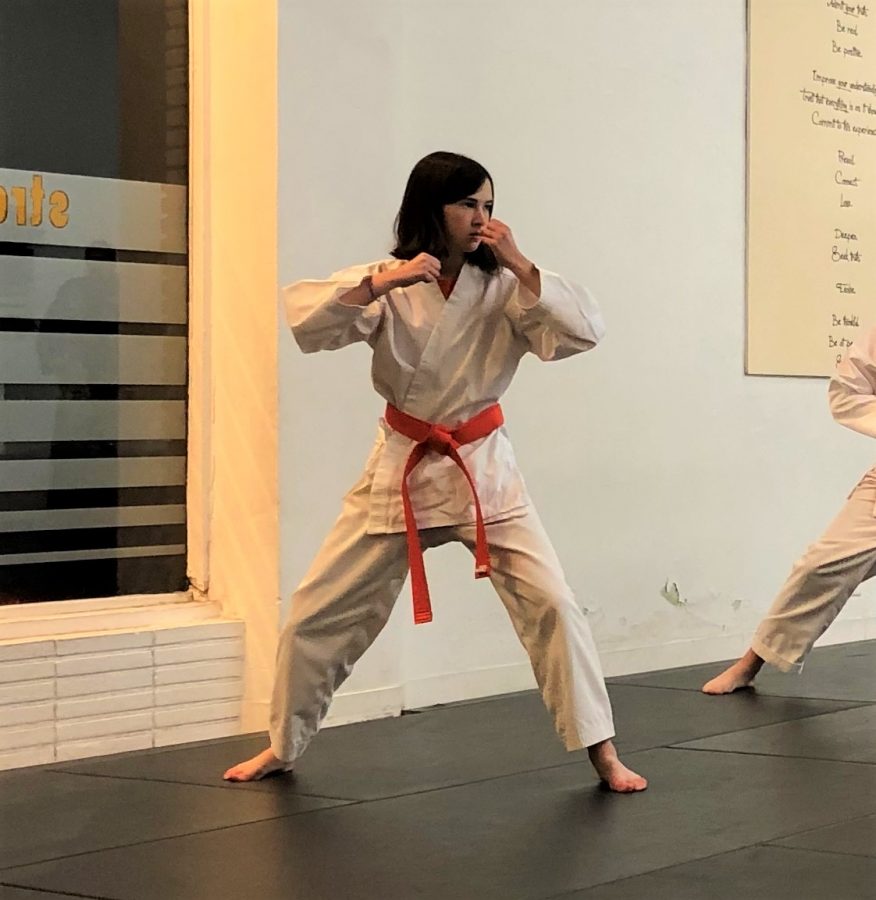 Junior Anna Tobey readies her fighting stance during her Orange Belt Test. Testing typically happens inside the dojo to measure a student’s progress in both the physical and mental aspects of the training.

Across from Foster’s Freeze, the Association of Kenpo Martial Artists, better known as AKMA, frequently catches the eye of many passersby. The dojo has a full length window spanning the front wall, granting a glimpse of the intense energy and rigorous training happening inside. After March of 2020, however, that window stayed dark and covered for months as quarantine stayed in effect. It’s only now that students are returning to the dojo in person, though the hiatus from in-person class hasn’t stopped their training.

Kenpo-karate itself is a hybrid martial arts style. It takes fluid movements from Chinese Kung-Fu and combines them with hard, straight strikes. The style focuses on actually being used for self-defense as opposed to being flashy or competition-based. Above all, it aims to teach learners to regard each other and control all aspects of themselves.

Shihan Marcello Aguinid has been with the AKMA for over fourteen years and is currently the head instructor. “Coordinating the actual move from regular to remote training with our students was the most difficult aspect of the transition,” Aguinid said. Other challenges, according to Aguinid, included adjusting tuition and having to learn the Zoom system. Prior to quarantine restrictions, training took place inside the dojo, but the start of quarantine marked the start of training through screens.

“We lost some students who were unable or unwilling to transition to remote training,” Aguinid said. Between the drastic change in environment as well as schedule, some students were simply unable to keep with the training.

Orange belt and Clark junior Anna Tobey found the new schedule of remote training to be more convenient. “The social aspect of remote was a lot worse, and some drills couldn’t really be done alone at home,” Tobey said. Tobey has been with the AKMA for nearly two years, a good chunk of which was during quarantine.

“The space has probably been one of the most difficult parts, with all of the maneuvering around furniture,” Tobey said, having trained remotely for most classes. Purple belt Alia Aguinid agrees with this sentiment as well. “It was hard for me to stay motivated to join class,” Aguinid said. “It became less social and mostly working.” Some drills themselves became entirely impossible, as no physical contact could be made.

“Personally, I believe that practice has slowly developed into a chance to be away from the same enclosure in which I live in, and a chance to be around other people,” said purple belt Ava Johnson. “Quarantine has overall helped me to realize my appreciation for what I typically take for granted because anything can change in an instant.”

As lockdown measures eased up a few months into the pandemic, classes began taking place outdoors in the open parking lot behind the dojo to allow for more personal space.

Even with the semi-normal lessons, some students still remained at home, and not all aspects of the training could return to normal. Any drills involving contact or even close proximity had to be taken out, and many students felt out of shape after many months of being at home.

A routine occurrence on Friday classes was dodgeball, a game picked specifically to help students build endurance, focus, good sportsmanship, and most importantly to allow them to have some fun. Tobey said that playing dodgeball with other students was one of the things she looked forward to in wrapping up her week, but that was also taken out of the classes for a good while.

While she’s learned to keep herself motivated, Alia Aguinid feels she’s lost some of her former connections with her classmates. “All the small laughs we have as a class are my favorite memories of training,” Aguinid said.

Like Aguinid, Johnson was glad to be back at the dojo in some form. “Just motivating myself to show up to class I would say was the most difficult thing for me,” Johnson said. While in-person training was more rigorous than its at-home version, students attending in person had to be mindful of a plethora of new things. Monitoring breathing and spacing became just as important as learning the material itself.

Brown belt Kevin Warendorp has learned through the AKMA since elementary school, and as students were eased back into physical training, both he and Alia Aguinid helped take attendance as well as temperatures. “I don’t think I have lost anything from remote training other than missing people,” Warendorp said.

“Indoor training, outdoor training, and remote-only training and transitioning between all three constantly has been the main challenge,” Shihan Aguinid said. He feels it hasn’t just been an effort on his part, however. Aguinid believes that those who continued to practice and learn Kenpo over quarantine have done just as much work for themselves as he has for them.

“I have gained a better understanding within myself through remote training,” Johnson said. Spending so much time focusing on herself as a result of remote training has allowed her to move past many of the burdens she carried into quarantine.

Presently, Covid-19 restrictions in Los Angeles have eased up enough with the April 5 Covid Update to allow for practice to take place inside the dojo itself, albeit at a very small capacity. While no longer completely shut down, recreational sports and any events associated with them still require approval from the Department of Public Health. Gyms can only operate at 25 percent capacity as well.

With students slowly returning to learning in-person, everyone will have a lot to catch up on. “I personally like training at the dojo because it has more room and I miss everyone,” Warendorp said. He feels it’s a breath of fresh air to be back after so many months, but for most it’s almost like starting from scratch. Johnson feels that both types of training have their own sets of factors that make training difficult, but each has their benefits as well. “I don’t have much of a preference and believe that both choices are better than none,” Johnson said.

Shihan Aguinid is looking forward to having his students back in-person. Though he knows there will be roadblocks and challenges ahead, he believes that his students can handle it. “It’s because of themselves that they are where they are right now. I just help them realize their potentials.”