Esports is the next big entertainment industry 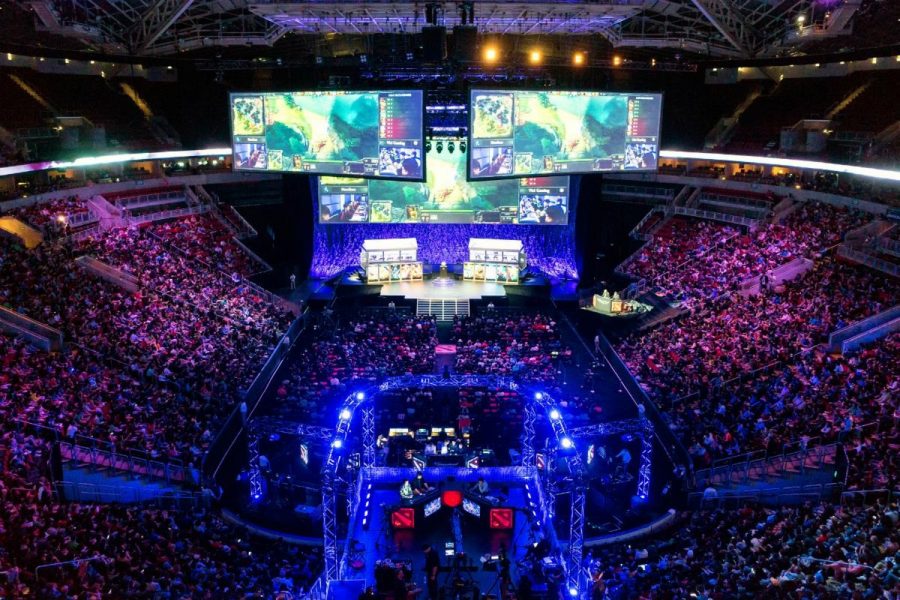 Esports competitions have the capability of filling up arenas.

“It’s pretty ridiculous seeing people making millions of dollars doing what I thought was just a hobby,” said UCLA junior Tim Calla, who competed in local Marvel vs. Capcom 3 tournaments in 2012 and now occasionally in Super Smash Bros. Ultimate. “I loved competing in fighting games but I could’ve never probably predicted that there’d be this much money in video games. What I used to consider something I did for fun people are now pursuing careers after.”

Esports, an amalgamation of all things entertainment, is a high production, professional video game-watching experience that viewers can experience in person as well as on live streaming sites such as Twitch. This year, esports revenues are projected to near $1.1 billion, compared to $905 million in 2018 and $655 million in 2017. Corporations such as Turner and ESPN and multi-millionaires such as Shaquille O’Neal and Rick Fox have invested in gaming organizations and teams, and there’s no doubt that esports wouldn’t be as financially viable without the players’ unmatched work ethic.

One might wonder: “Why are esports called sports when all these ‘athletes’ sit in chairs for a couple of hours and get paid?” A common stereotype is that people who play video games all day can’t hold stable jobs, contribute to society or have functioning social lives. However, esports players spend hours on end competing and practicing to be the best, and also establish relationships with professional organizations, such as Team Liquid or 100 Thieves, to extend their outreach past their screen. Twitch streamers and competitors such as Poach and Nadeshot fulfill organization obligations as parts of their contracts, and, in turn, are salaried alongside their prize money and streaming revenue.

To even be given the opportunity to play at the top level of any video game, players have to grind their way to the top. Compared to big sporting leagues such as the NBA or the NFL with designated recruiters or scheduled open practices, professional gamers have to dig their way into the spotlight. The main way to do so is through public leaderboards, or by streaming on their own channels, giving viewers a peek at their individual talent. Because of this, most esports teams only compete with the best of the best, resulting in the most entertaining experience possible for viewers.

“Esports isn’t something I’d get back into now that I’m in college,” Calla said. “I was never amazing at traditional sports, but if I were still in high school, I’d probably dedicate hundreds of hours into becoming the best at Smash. With time, I think esports will be more socially accepted as a possible career once people start to realize the amount of money that goes into it.”

Esports has been competing with regular sports for quite some time. Whether it be in viewership or prize pools, esports is no slouch compared to the big leagues. In 2016, the League of Legends World Championship had 16 million more viewers than the NBA finals, one of the greatest playoff series of all time, during which Lebron James mounted a 3-1 comeback against the Golden State Warriors. Also, esports has considerably large prize pools. Dota 2, in 2017, had a total combined prize pool of $24 million, compared to the 2017 Masters Tournament, which granted an $11 million prize pool.

Many schools are also creating esports teams to field rosters from their own student bodies. For example, the University of California, Irvine, created an esports division, which allows students to compete on campus.

In a recent Reddit AMA, one of the creators of UCI esports, Mark Deppe, described why esports has begun to take over traditional sports in terms of being socially accepted. “I think eSports represent an evolution in competition that will surpass traditional sports,” Deppe wrote. “I like to think that we’re creating something better and so we set the bar too low if we aim to be another version of sports.”

By developing an esports division on campus, UCI has influenced many other colleges such as UCSD and UCLA to develop esports divisions of their own. As one of the first schools to do so, Deppe felt ahead of the competition. “We’re positioned to be the best school on the planet in eSports…which, in my opinion, is the future of competition. The old athletics paradigm will shift as TV revenue goes away in favor of free content online,” Deppe wrote. “It’s already happening and UCI figured it out before any of our peer institutions.”

Senior Hamlet Avetisyan began watching esports recently. “I watch esports now the same way I used to watch regular sports,” Avetisyan said. “I use it as white noise when I’m doing homework but I can also be super concentrated on the games.” Avetisyan mainly watches Super Smash Bros. Ultimate which holds major tournaments almost every weekend.

Esports will at some point be available on national television on a wide scale, rather than just on streaming sites on the Internet. In fact, Turner has its own esports division which has hosted several esports competitions in numerous games such as Counter-Strike, Street Fighter and many others. Though most of these competitions have been one offs, there is a strong possibility of a more consistent esports presence on a more accessible and available television network such as TNT, with several more esports events hosted by Turner in 2019, such as a FIFA and Mortal Kombat 11 tournaments.

“I wouldn’t be surprised if my kids end up having role models that are esports players,” Avetisyan said. “It’s what they’ll probably see on TV, the same way I saw sports players growing up.”