A program that exposes students to modern day architecture, construction, and engineering. 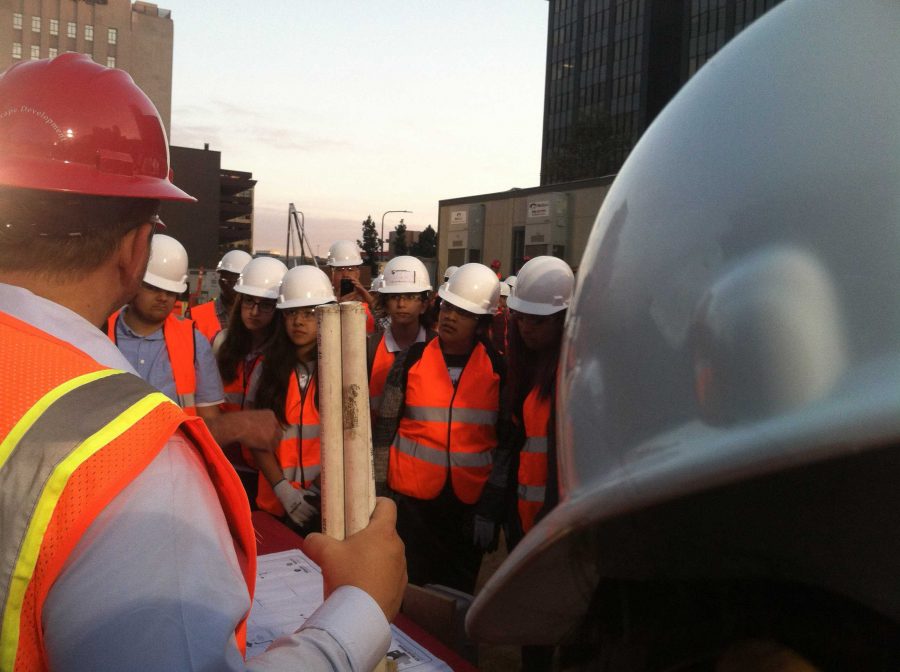 For the past three years, Glendale High School and Clark Magnet High School have participated in the ACE mentoring program — an extracurricular activity that allows students to expand their knowledge in the architecture, construction and engineering fields.

Lia Gharabeg, a junior who has been in the program since freshman year, originally joined to learn more about the three fields. “I always wanted to know what engineers did as an occupation, but after I joined ACE, I found that architecture interests me as well.” Gharabeg hopes to continue her participation in ACE in hopes of finding which one of the two pathways she should pursue.

This nationwide program gives students many opportunities, whether it be public speaking skills or paid summer internships. “Because of ACE I have learned many new skills such as leadership, time management and operating tools,” Gharabeg said.

Clark Students in ACE also participate in design competitions and experience hands-on learning in the construction trades. They work together with Glendale High students as a team to complete a project they will present at the end of the year to all the other teams in the Los Angeles region.

“I have been in ACE since freshman year,” said junior Arpa Zorakian. “I joined the program because I was not sure which pathway to pursue — architecture or engineering.” After joining the program, Zorakian found that engineering is her true calling. Zorakian recommends ACE to anyone who is uncertain on what their future career will be.

Maurice James, former assistant principal at Clark, has been representing Clark’s team for the past few years. He has introduced students to many people working in the three fields and has opened the gates for students to discover paths to their future.

Unfortunately, James will not be able to represent the team this year. However, photography teacher Gregory Zamlich will be taking James’ place. Zamlich said that he cannot wait for the program to start. He has had some experience in the construction field prior to becoming a teacher at Clark and is eager to help the team in any way possible.

Clark’s team rides a bus to Glendale High School every other week during enrichment where they meet with the Glendale High students in the classroom of Betsy Astor, a special education teacher who represents the Glendale High team. Upon arrival, the team discusses what needs to be accomplished with their mentors.

According to most of the participants in the program, the mentors play a crucial role in the program’s success. “I think the most important part of the program is having all the support from our mentors,” Gharabeg said. “They contribute their time to ensure we understand all about architecture, construction, and engineering.”

“Without the mentors, the team will not be able to compete in the competition, they always support us, teach us techniques, enhance our understanding, and most importantly, make us prepared for the industry,” Zorakian said.

Gharabeg said that most of the participants last year have graduated, so the team is looking for new students who are interested in joining this school year.

Galia Gharabeg, a former participant in the program, and the sister of Lia Gharabeg found the program of great value. “It’s a great program for students to be a part of,” she said. “It has allowed me to decide which pathway I should take.” Gharabeg said that she is confident that her decision in majoring in graphic design was a great choice. The seniors in the program benefited from the experience in many ways, with some seniors were being awarded scholarships.

“I have made so many connections and friends throughout the years in ACE,” Lia Gharabeg said. “Architecture is connecting people to buildings, and the only way you could do so is by first learning how to connect to people, and ACE has definitely taught me to do so.”

At the end of the school year, all the teams from the ACE Los Angeles region meet at a high school and present their designs for their project. Last year, the schools were given the task of designing a campus for a university. The Glendale team was tasked with creating the student commons.

“The software we used for designing the building was Google Sketchup,” Zorakian said. “Learning the software is fairly easy and is a bonus when it comes to job or even college applications.” According to both Zorakian and Gharabeg, the designing part of the project has led them to think in a more broad and creative manner.

After designing the building, the students made a 3D model out of cardboard, wood and other materials in order to put on display at the actual competition. They also were required to create a presentation in order to present in front of the other schools. This was the most terrifying part of the project for most of the students, but nevertheless, it allowed all of them to enhance their public speaking skills and feel confident in their work.

“I have learned countless things in ACE, but I believe this program has allowed me to learn one important aspect anywhere in life, regardless what it is —  teamwork,” Lia Gharabeg said.