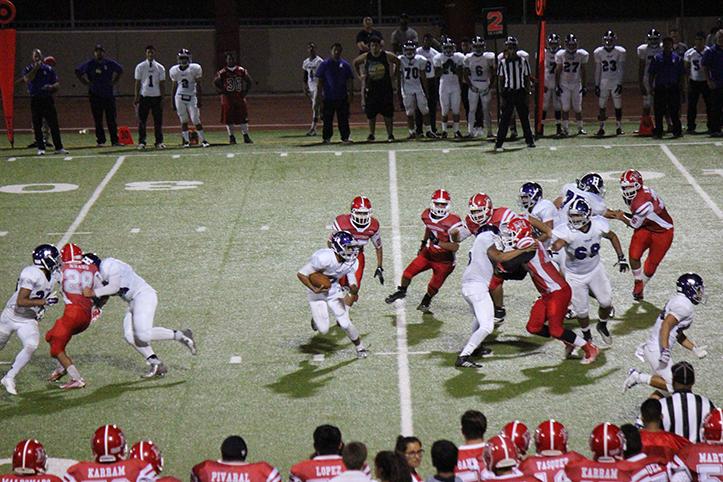 Mousamoghaddam plays for Glendale High carrying an injury throughout the game.

Precautions are being taken to reduce the chance of permanent damage

“You need a strong mindset to play football,” said senior Narvik Mousamoghaddam, “It’s a sport about not giving up even though something might hurt, about sacrificing yourself for the team.” Mousamoghaddam has sacrificed himself for his team, facing multiple injuries from his current and last year’s season, including a sprain on both his left and right ankle and a concussion.

Like Mousamoghaddam, hundreds of thousands of students get severely hurt during games, runs, and even practices. According to the SouthWest Athletic Trainers’ Association (SWATA), high school athletes account for about two million injuries, 500,000 doctor visits and 30,000 hospitalizations every year.

“The day I got my concussion, I was running downfield to block the receiver,” Mousamoghaddam said. “I saw my target, it was just me and him. I sprinted towards him and put my head down. That’s all I remember,” he said. “I was told I made the block after the game was over.”

He said that his face went numb, and the team trainer pulled him out of the game since his helmet sensor went off. The team trainer then asked him a few questions: What’s your name? Where are we? What month is it? Can you say the months in order? His responses were delayed and he was unable to recite the months.

Mousamoghaddam said that he felt like vomiting after the game and had a headache for the next couple of days, which are common signs of a concussion. A survey from Safe Kids Worldwide shows that concussions account for 12 percent or 163,000 of the yearly ER visits student athletes make. As stated by SWATA, high school athletes are three times more likely to have a concussion after they have already had one.

Reasons like this are why the athlete injury section was just added into the Glendale Unified School District parent handbook this school year. According to EdSource, there was a new law passed in January of 2013 in order to address “under-reporting and undertreating of youth concussions.” The law states that coaches should be trained in catching the symptoms of concussions and knowing how to respond to this knowledge.

GUSD’s Assistant Director of Student Support Services Scott Anderle said that the new law requires school districts to inform parents of any injuries their children may have received. “It’s important that parents know what to do regarding concussions and to not let their kids continue playing a sport while still injured,” Anderle said.

Safety precautions have been taking in order to ensure the amount of concussions GUSD’s athletes receive are cut to a minimum. “Our district’s football players have collision clips inside their helmets that indicate how hard they hit their heads,” Anderle said. “Once it hits a certain level it tells them to check the child for the concussion.”

He also said that football players are supposed to receive a baseline check, a computerized assessment that measures the different types of brain activity and acknowledgement of past concussions, before the season so the trainers

have prior informations to compare with how the student does on the check after getting a possible concussion. “We are now having trainers knowledgeable about concussions and school nurses as well,” Anderle said. “If a child were to hit their head during Physical Education, the nurse should be able to follow the concussion protocol and contact the parents.”

While injuries like concussions are given a significant attention now, this is not because there has been a large increase in injuries, according to PE teacher Chris Axelgard. “I haven’t really noticed any increase in the amount of injuries students get over the years,” Axelgard said. He also said that he has never thought about the issue of water polo players getting concussions, but that is something he needs to take into consideration as a coach. “This is the challenge of playing a physical game with no padding,” Axelgard said. “I’ve broken my nose and gotten stitches by my eye too.”

Even in a sport that involves protective padding like football, the injuries could affect players more than initially perceived by the athletes themselves. “Concussions could have serious lifelong effects as injuries stay with you for the rest of your life, which is why it is important to have regulations placed to reduce those injuries,” Anderle said. He said that though teenage athletes may feel as if they will only suffer for a few weeks/months, even when they heal, they have created a fragile spot on their bodies.

Anderle, himself, has personal experience with sports injuries, as he said that he injured his left knee while playing football, and he still feels the pain now, 35 years after it happened. “The greater increase of regulations, the better quality of life for these athletes,” Anderle said.

On top of concussions, football players face several other injuries that could threaten their entire season — injuries ranging from twisted ankles to dislocated shoulders. “Going into senior year with high expectations as second-year captain of my varsity football team, I dislocated my right shoulder in a summer passing league game with Village Christian High School,” said senior James Tumbucon. He said that he even dislocated his shoulder twice more during football season, is going through physical therapy, and will postpone surgery in order to continue playing this season.

Many students continue to play for their team even while they are injured, which only intensifies the damage. “I’m getting reconstructive surgery after my season is over in November, because I don’t want to miss any more games,” Tumbucon said, “especially since I love my teammates and have been with them for the past four years.”

Tumbocon said that he regrets trying to block the player which led to him getting hurt since he had to sit out a couple of games due to injury which ended up hurting his team in the long run.

Mousamoghaddam also had to miss two weeks of football after his left ankle injury late August. “After head-to-head contact, a pile of people landed on my leg, twisted my ankle, and I heard two pops which I assumed was my ankle popping out and back in,” Mousamoghaddam said. He said that he was on painkillers so the pain was not too bad, but he did have to go to the emergency room the next day since his ankle was swollen. As in this situation, students oftentimes have to go to the emergency room because of their involvement in sports. According to Safe Kids Worldwide, student athletes visit the emergency room due to a sports injury every 25 seconds, which is over a million times a year.

What causes these accidents is the the passion present in the hearts of every player during the game. “The higher the level of competition, the higher the chance of getting injured,” Anderle said. For those part of a team, this risk is a chance many are willing to take. “It’s still worth playing despite all the injuries simply because there is nothing like it,” Mousamoghaddam said. “The adrenaline rush, the brotherhood, and the lessons it teaches: push through adversity and don’t give up. The way I look at it, my body is a tool for the team — to help win the game.”