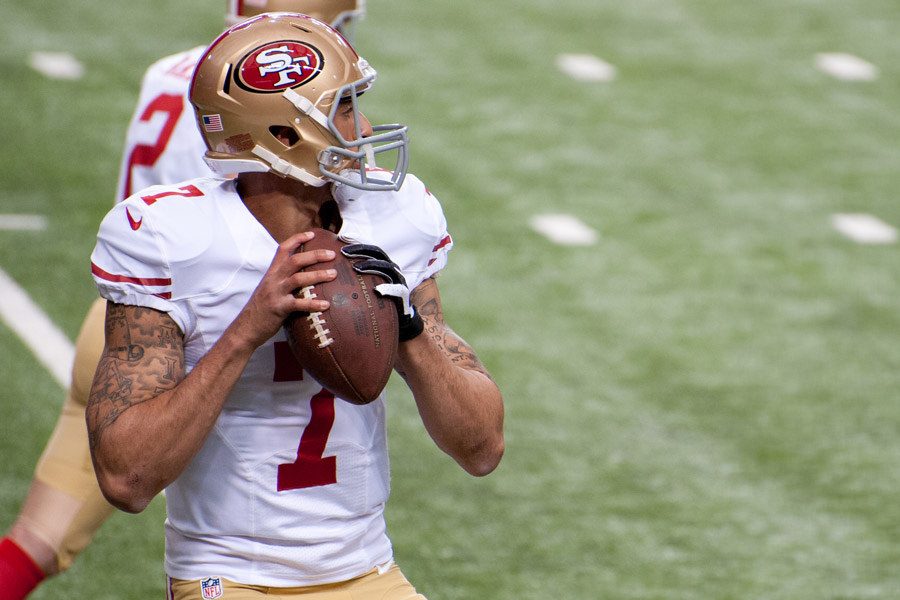 Colin Kaepernick, the leader of the kneeling movement.

Should NFL players take a knee?

The Washington Redskin players lock arms together during the national anthem. It was one of the many protests sparked by former NFL quarterback Colin Kaepernick in 2016.

Every Sunday, instead of doing homework or studying, I jump on my couch at home and flip on the TV to watch some NFL football. American football is America’s beloved sport, with millions of people watching the games every weekend. The powerful tackles, the use of brute strength, and of course, the touchdown celebrations are all that makes this game unique. But recently, I found myself not interested in the game anymore. I was more interested in seeing players kneeling, kneeling for the national anthem.

In the recent fiasco between President Trump and the NFL over anthem protests, I feel like it’s gotten way more complicated that it was intentionally meant to be. It started with my favorite team, the San Francisco 49ers on Aug. 14, 2016 when former starting quarterback Colin Kaepernick refused to stand up for the national anthem due to the racial injustice he believed was happening.

Innocent people of color getting shot or arrested by white police officers is the motive for many NFL players, mostly of African American descent, to kneel. Although the anthem protests have led to mixed results of unity and divide from many NFL teams, many people such as the President, feel like the anthem protests are offensive to veterans and the country. In some games, you could hear fans loudly booing the players as they kneel on live television. President Trump even said that players should be “fired” if they kneel during the national anthem, but this has proved ineffective as NFL owners and fans have stood by their players. A recent poll concluded that 61 percent of Americans do not believe NFL players should be “fired” if they protest, but for the majority of NFL fans and bystanders, protesting seems like a pointless act for NFL players to protest against the anthem, but I believe that it is the repetition of a well used, highly successful formula used throughout the decades. Remember the 1968 Olympics in Mexico? Most likely not, but the most iconic image we all remember is when two African American athletes, Tommie Smith and John Carlos, raised their fists on the podium during the national anthem in protest to the racial discrimination back home in the U.S.

Muhammad Ali famously declined to be drafted in the Vietnam War because of his Muslim beliefs, adding to the controversy surrounding the government and why war was necessary in the first place. In 2014, four St. Louis (now Los Angeles) Rams players entered the field with their hands high up in the air, using the same gesture police shooting victim Michael Brown used when he was innocently shot down by police officer Darren Wilson. They are all examples of athletes using sports as their platform to speak out on politics and the problems of society.

With all this tangled jumbo of a problem, there seems to be a hidden beauty behind all the madness of Trump and the NFL. I feel a sense of unity seeing players standing up for what they believe in, working closely with community organizations to make a better future for us and the children we’ll have. Players like Kaepernick are doing the right thing by protesting the anthem, even though it is seen as morally wrong by many fans.

We are all missing the main point; it’s not the debate about the anthem boycott that’s important, it’s the deep topics that lie under it that is. Racial discrimination, police brutality and other political ideas are being included in the national discussion. Sports protests like the kneeling protest led by Colin Kaepernick inspires people to go vote for change and demand it. Citizens are opening their eyes to the problems of society because of sports activism. Those NFL players are bringing awareness to some problems that are being kept hushed on. They aren’t dividing the country, they’re uniting it. That’s the beauty of sports and activism, they go hand in hand.

Although some may argue that sports and politics should be separate, I do not believe that is the case. These days, the subject of politics has been feature and talked about almost everywhere, so why should sports be excluded?

Take a look at our history. Athletes protesting from the past have changed our world today, as well as hundreds of lives. Olympians like Tommie Smith and John Carlos as well as other professional sportsmen and women deserve more recognition for their bravery to go against the general opinion of fans and government. This modern day anthem protest started by Kaepernick is no different. It doesn’t matter whether protesting for the anthem is right or wrong. What’s important are the topics of racial discrimination and police brutality being included in the national conversation.

We shouldn’t just look at what we see on the outside like Trump. The subjects NFL players are bringing awareness to are the things we as Americans need to change. The players are merely using their freedom and individual right for the good of people, and I don’t see why there’s something wrong with that. We all have a right to protest, to stand up for what we believe in, and to openly denounce injustices happening across the country. If we can do it, why can’t they?

Why flag kneeling won’t solve anything

“I am not going to stand up to show pride in a flag for a country that oppresses people of color.” These are the words of Colin Kaepernick, the leader of the “kneeling movement.” In the United States, he is associated with many terms: traitor, activist, hero, loser, etc.  I believe that the cause he and many others associate themselves with is just, but the way the activists twisted the cause and the way they express themselves is not. I believe in our Constitution, and I understand that these people do have the right to kneel when the flag is raised and the national anthem is played, but that doesn’t make their actions right or just.

The cause of equality that these people represent is a true one in some ways, and should be addressed. African Americans and people of color do feel disenfranchised from America and for good reason. Decades of Democratic Party control of those communities have led to a poor life for the inhabitants. They have grown up in the welfare state that has been promoted. This leads to violence and underachievement, which of course breeds resentment. However, even though the protesters have the right to do so, they shouldn’t show this resentment against the flag that millions of Americans have died for. That flag and everything it represents is the reason why they even have the opportunity to kneel.

Polls show that this view is held by the majority of Americans, with 64 percent of Americans believing that NFL players should stand for the flag and be respectful during the anthem. President Trump, sensing that public opinion was in his favor, blasted the NFL players last week with derogatory language, calling them “sons of bitches,” saying that they should “get off of the field.” These messages do not help the problem; they only worsen it. We must teach the protesters that kneeling when the anthem is played doesn’t make their life better and it won’t change the situation.

Kaepernick, the “leader of change” in this movement, has never even voted. How do the protesters expect change to be done if they don’t use their democratic right that the flag represents. If these protesters really want change, they should vote out their corrupt politicians that have been running their communities for decades. They should vote out people like Maxine Waters, who has represented communities like theirs for years and has done nothing but profit off of their position.

Change in America doesn’t happen with protesting on the field, but by voting on Election Day. These protesters should know this, and they should also understand that electing corrupt Democratic candidates year after year isn’t helping their communities, but making them worse off. Those who feel disenfranchised by the American political system should take a chance on the Republican idea, that anyone, regardless of skin color, has an equal shot to make it in America and that with hard work and determination, anything is possible. This equality of opportunity is what makes America great and it is the only way these communities will become a healthier place to live.