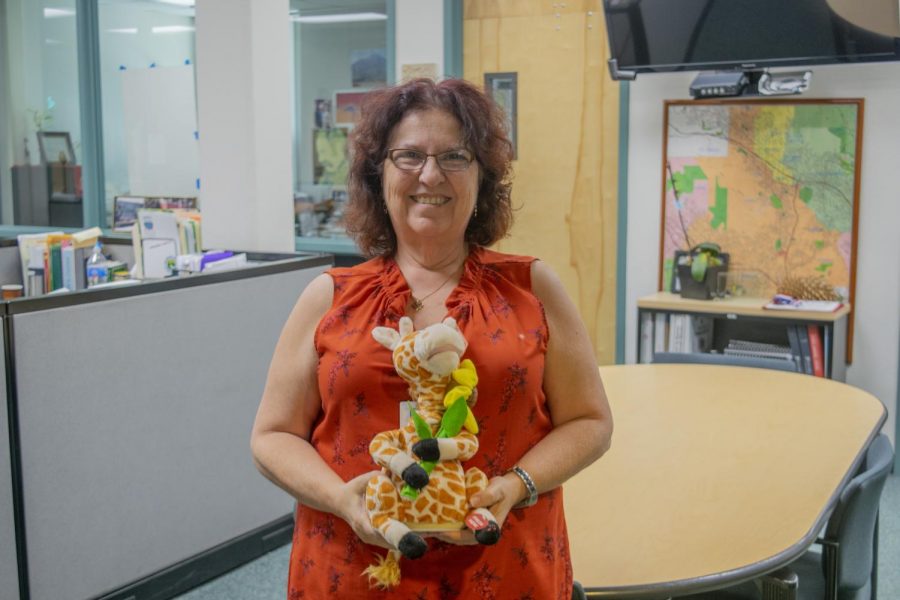 Ms. Howe, one of Clark’s counselors, holding one of her iconic giraffes.

Most Clark teachers are known to stick around for a long time. So it came as a surprise to many students when they found out that Susan Howe, a longtime counselor and math teacher who has worked at Clark for 20 years was retiring this year. Howe, who has been working for GUSD for more than 42 years, says she believed that Clark was like “heaven on earth” when she first walked in through the doors. “The students were amazing, in all respects ― in behavior, in academic performance, in showing respect.”

Howe started her teaching career at Toll Middle School in 1977. “It was actually Toll Junior High School at the time,” Howe said. “After that I taught at Hoover, and then I finally got the pleasure of working at Clark.”

Although Howe is known to most current students as a counselor, she didn’t start out that way, instead teaching math and Spanish when she first arrived at Clark. “I really enjoyed teaching those two subjects because most students I know struggle with either math or Spanish. I enjoy math because most people hate it, and I like having math come alive in the classroom,” Howe said. “With Spanish, I enjoyed having students who don’t know too much about Spanish and all of a sudden they are learning everything and they can write paragraphs by the end of the school year. That’s what makes me feel good, seeing students progress.”

But as Howe progressed through the years as a teacher and then as a counselor, she noticed that many changes took place at Clark and around the community. “I see a change in the students, as technology evolved quite a lot since I started,” Howe said. “Students knew how to go to a library and read and research. Now you have the research in the palm of your hand.”

Howe believes that students must also be careful in using technology while researching for their school-related work. “It all depends on how the students use it,” Howe said. “I think many times students use it in a negative way because there’s that instant gratification, so they don’t work as hard as they could to dig deep since everything’s there at a touch of a finger. I think it developed a whole different type of work ethic and working style.”

Howe said that she also sees how expectations for college have fluctuated during her long stay at Clark. “When I first started as a counselor six or seven years ago, we probably had 50 percent going to a four-year college and 40 percent going to GCC, and now it’s taken a total turnaround,” Howe said “Part of that is cultural. But I feel that as a counselor I have opened a lot of windows of opportunity for people to get scholarships and to attend four-year colleges.”

Howe says that she has many plans after to retirement. “I plan to travel a lot,” she said. “I love to travel. I have family in Wisconsin and Argentina, and I’m hoping to see them after a very long time. I hope to reconnect with my family and to volunteer. Maybe even come back and sub at Clark.”