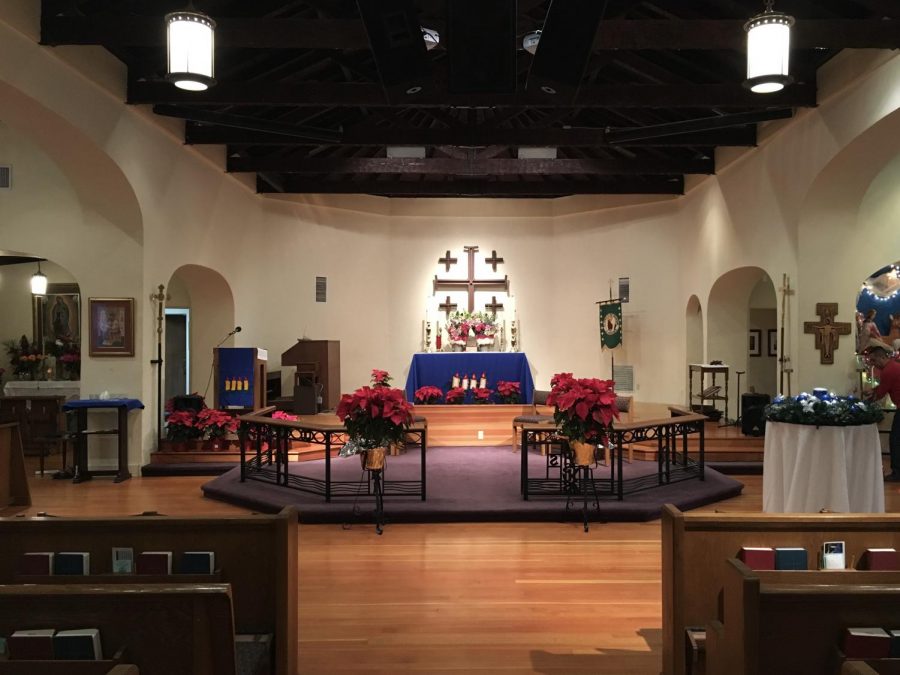 St. Luke’s of the Mountains is a cozy Episcopal church located in the heart of the Crescenta Valley with a beautiful interior.

As the clock struck 11:30 a.m., a talkative, merry crowd of congregants left the chapel after the 10 a.m  weekly Sunday service at St. Luke’s Episcopal Church in La Crescenta. Amid the crowd exiting, I made my way into the building through the sacristy in the back part of the building with my alb in hand ready to begin another Sunday of spirituality. I have participated as an acolyte for about eight years.

Preparing the church for the next service at noon, I moved quickly to make sure everything was in its place to facilitate the service. I put on my alb in the mirror and tied the rope around my waist, making sure my regular clothes were concealed and that there were no visible marks on the pure white alb.

I swiftly got to work after that; every candle needed to be filled to the brim with oil, the symbolic wine and bread needed to be reserved in the correct quantity, and the altar needed to be meticulously set with everything in its correct location. In half an hour, the seemingly simple tasks can become overwhelming, especially when striving for perfection.

At 11:55, I carefully took the 9-foot tall cross from its stand and headed for the church’s hall to begin the weekly procession to the chapel with the congregation. The hall was packed with passionate church-goers catching up with each other by talking about their week. I stood near the main doors to the hall supporting the hefty cross waiting for noon to arrive and for the pastor to begin the service.

Attending church weekly represents a vessel of connection and bonding for many people. Each week, the same faithful, loyal group of believers attends the service to worship God and connect with those who share the same beliefs.

“[Coming to church on Sunday] something I look forward to every week and make an effort not to miss. It has become a stronghold in my life and being able to represent it in real life along with others who share the same beliefs as me is really nice,” said congregation member Joaquina Elorza. “I feel really happy every Sunday to worship God and get to know more people.”

On a recent Sunday prior to the COVID-19 pandemic, the historic chimes in the 95 year-old church’s bell tower sounded in the distance, signaling the beginning of another Sunday of spirituality. As we processed into the church, the breeze blew, setting a comforting atmosphere; and the birds chirping seemed to be a welcome gesture to the attendees. The procession seemed like a moment of zen and respect before beginning the Sunday worship.

St. Luke’s is a historical landmark of the Crescenta Valley. Built in 1924 under the supervision of Seymour Thomas, the church has become an icon in La Crescenta, much like Sleeping Beauty Castle is an icon to Disneyland. The intricate stonework on the church is something that is valued by both regular congregants and visitors. The church is considered the “architectural centerpiece of the Crescenta Valley” by the Historical Society of Crescenta Valley. Knowing that stones represent stability and a strong foundation in spiritual terms, the building takes on a whole new meaning beyond the gray rock and concrete that make up the building.

Upon arriving at the church, people who were already inside stood up and the service officially began. “In the name of the Father, Son, and the Holy Spirit, Amen,” recited the Rev. Dr. Antonio Gallardo to begin the service. Everyone stood in respectful silence as Gallardo said the opening prayer. I closed my eyes and became mindful for the brief moment as I became one with my faith and channeled my spirituality.

The lessons and Gospel were read and the sermon began. Each sermon adds a layer of depth and insight to the service based on the readings and often makes one reflect on what was just read. Despite the sermon’s length, everyone remained silent and listened attentively to Father Antonio as he preached the word of God. I listened attentively as Father Antonio connected the lessons to current events.

“In our Episcopal tradition, we base our faith on three things: the scriptures, the traditions, and the reasoning,” said the Gallardo, priest-in-charge of St. Luke’s. “We believe that God speaks through us in the scriptures, there is no doubt about it, but it does not stop there. We also believed that God continued to work after the Bible was written, which is the tradition we believe in.”

When the sermon ended and the church recited the Nicene Creed, I made my way to the back of the building to retrieve a binder filled with names of people that our congregants had asked us to pray for. I bowed out of respect in front of the altar and when the creed was recited, I stood at the lectern and read the Prayer of the People. The prayer holds significance as it is a collective plea for the peace and well being of the world. It is also an opportunity for members to pray for their loved ones who may be going through rough times or who have passed away.

Reading it, I was mindful of each line which asked for the different components of people’s lives: health and safety, the well being of the government, birthdays, anniversaries and other factors that deserve prayer. Despite being a short and simple prayer, I read each line and name slowly and carefully to fully manifest the faith people have in Christ.

We all gave each other a symbolic handshake or hug representing peace. The act, while simple and often overlooked in normal settings, holds a deeper meaning in church as it represents the desire to be united and friendly with everyone, just as the Bible has taught believers.

Proceeding the peace offering, the arguably most important part of the service begins: the blessing of the bread and the wine which represents our faith and trust in Jesus Christ as we follow the tradition which parallels the Last Supper, and in turn reaffirms our belief and faith in Jesus Christ. The act of taking communion represents a reminder that Christ gave his life for mankind and by consuming his body and blood, we are recognizing his sacrifice.

“The tradition of taking communion is something I grew up doing every week as a child, but learning about it more has helped me to see that it is more than just a mindless tradition,” Elorza said. “The significance behind the act helps me see why we do it every week and makes me feel a stronger devotion to God.”

People like Elorza feel inclined to follow religious traditions due to their prevalence in their culture. Often, however, modern youth feels inclined to abandon religious beliefs and traditions, despite their exposure to them. A study conducted in 2019 shows that young adults tend to distance themselves from religious organizations due to conflicts with their morals and personal responsibilities.

“I will say that I believe that part [of the reason why the youth is distancing themselves from religion] is the perception young people have of church. I don’t think young people may see that churches are adjusting to the society we live in, and I think that we as churches need to do a better job in figuring out what it is that young people are looking for,” Gallardo said. “What we are trying to do here at St. Luke’s is figure out what the community needs and how we can help to be the light of Christ. The Firehouse is an example. My understanding is that from the time the church bought the building in the ’50s, the intention has been that the building is a community center,” Gallardo said. The Fire House has been used as a youth center since 2010 in which middle and high school students are welcome to congregate at the “safe house.”

Most notably, on Tuesdays, the Fire House is open from 6 to 8 a.m. to Rosemont Middle School students as a place to meet safely before school begins, as Tuesdays are banking days. “In this case we are partners in serving something that serves the community: the parents, the school, and even the businesses. I believe the church is more than a service,” Gallardo said. “Christ is preparing to send us into the world, not just feel good about ourselves.”