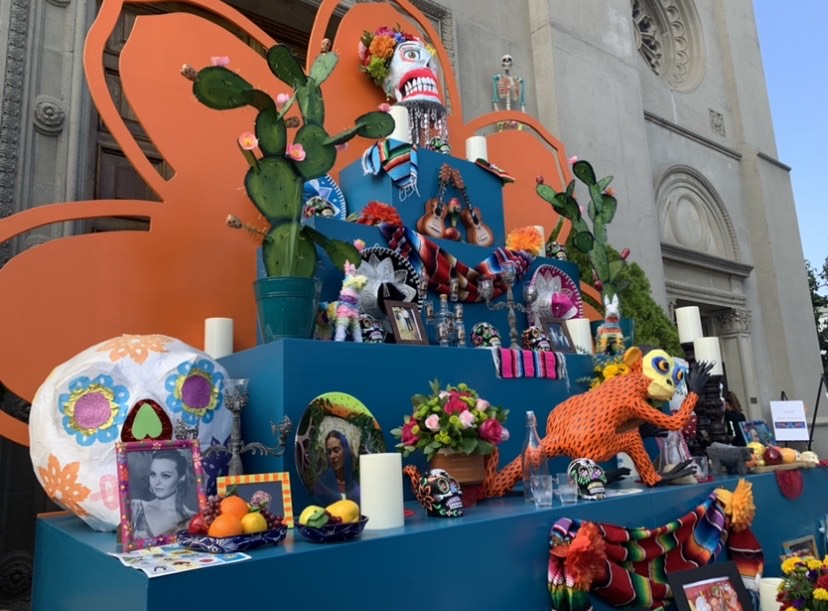 On October 27th, Forest Lawn held a Dia de los Muertos event that honored those who are deceased.

A tribute to our ancestors

On Oct. 27, Glendale’s Forest Lawn event allowed me to really connect with my culture by celebrating Día de Los Muertos, a defining moment in Mexican culture. It calls for a celebration of life — to remember those in a beautiful way, instead of a solemn one.

Día de los Muertos is often mistaken as a ‘Mexican Halloween’; however, that’s false since instead of being connotated with spook and terror, the holiday exists in order to honor those who are dead, and it takes place within two days, unlike Halloween.

On Nov. 1 and 2, Mexico, along with other countries in Latin America, remembers their loved ones in a joyous way by laughing and sharing stories about them. The holiday began with two towns in Mexico — Azteca and Toltecan. The Aztecs at the time dedicated a whole month to celebrate the lives of those whom they lost. Soon, the Spanish arrived in Mexico, bringing along their religious customs which got mixed with the natives’ customs.

When I arrived at Forest Lawn, a beautiful ofrenda stood behind the museum. A runway made out of marigold flowers, a symbolic figure used to guide the spirits to the altars to visit the living, was placed under the ofrenda which adorned the overall view. After observing the ofrenda, my family and I headed inside the museum where other beautiful designs and altars stood.

The ofrendas really took my breath away since it was the first time I saw an authentic one in person, not just as a school project that was made last minute.

We sat down for a puppet show. Kids sat down in the form of a circle in the front to properly enjoy the show. People of all ages awaited the show, excited and ready to see and record the puppets. After getting ready, two men walked out from the curtains and brought out various puppets, including “dogs” that brought smiles to the kids’ faces. The show lasted about 30 minutes, and it was clear that their puppet show was a success by the way the kids were laughing.

One of the puppeteers even let me hold his puppet, Chile, and taught me how to move its head, which is much harder than it seems. 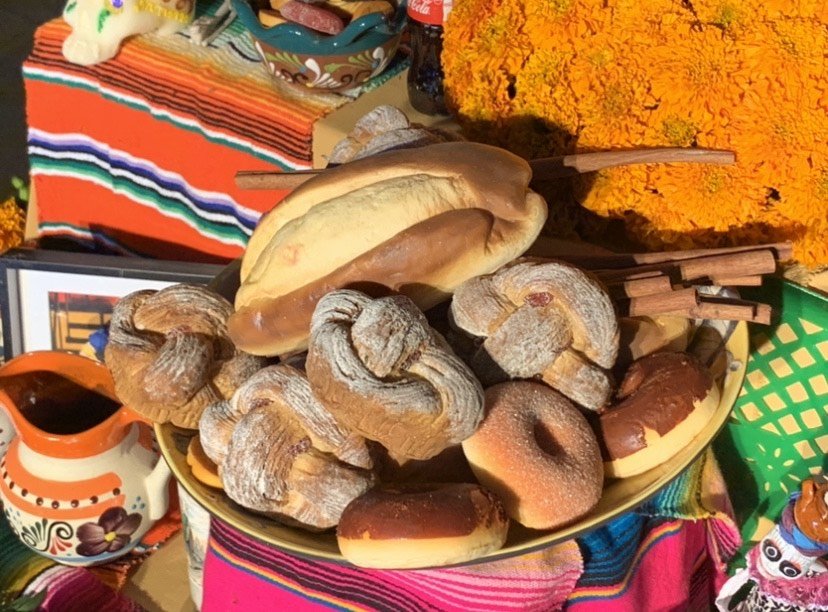 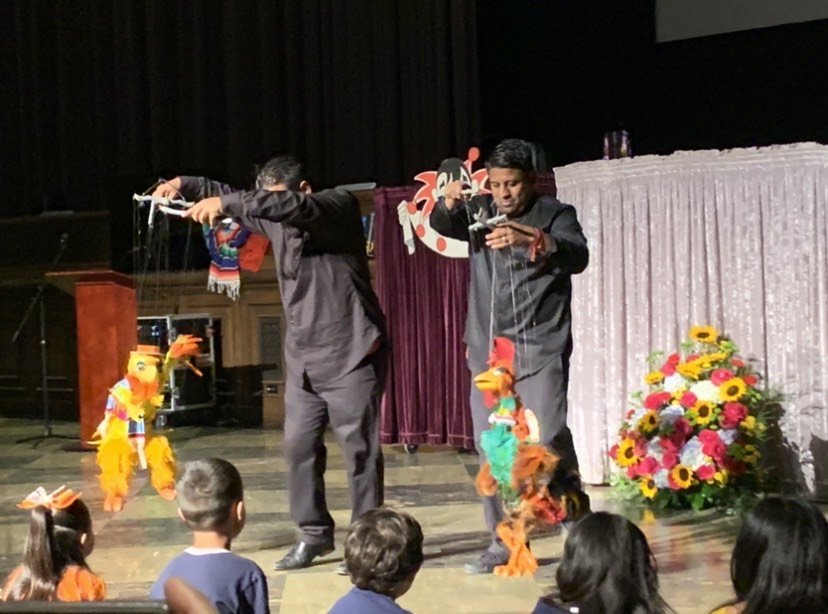 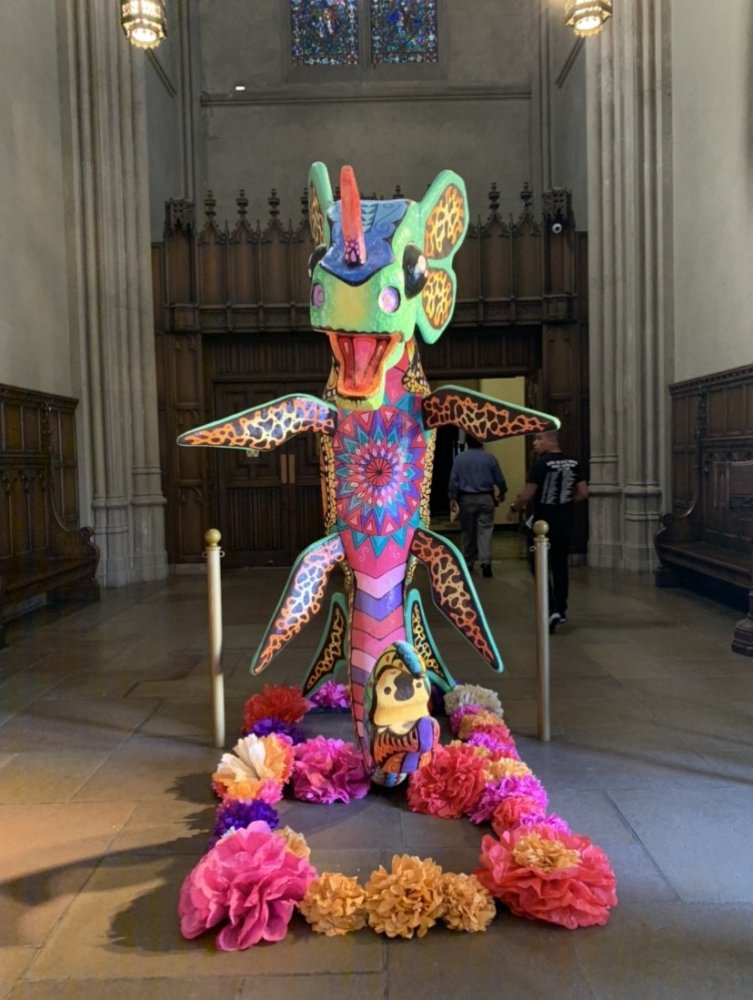 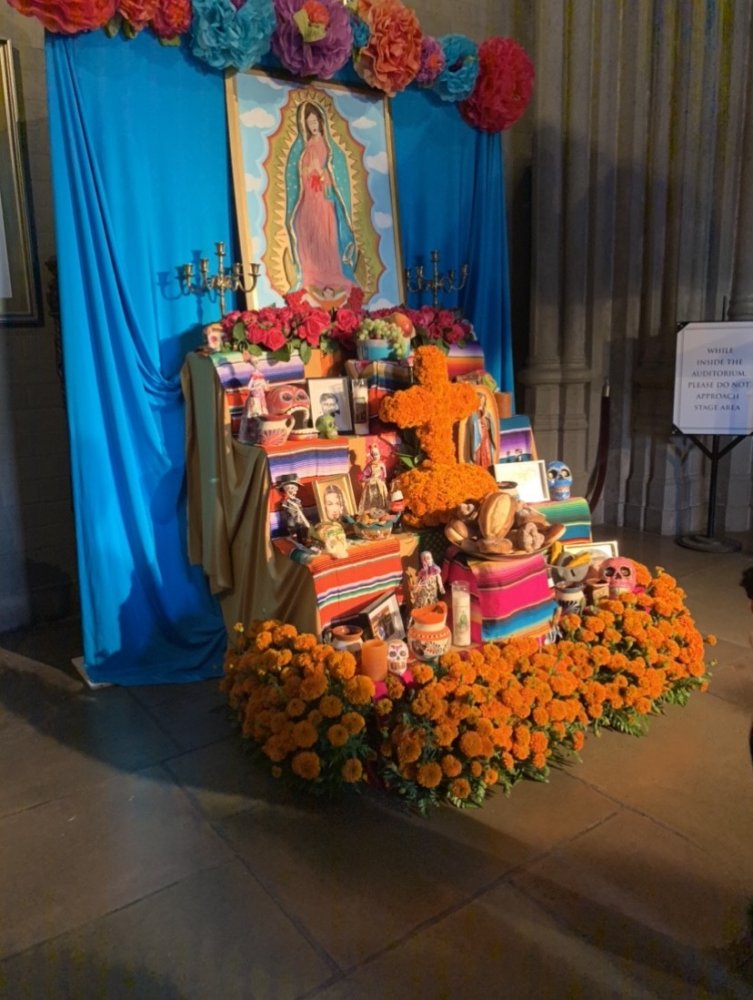 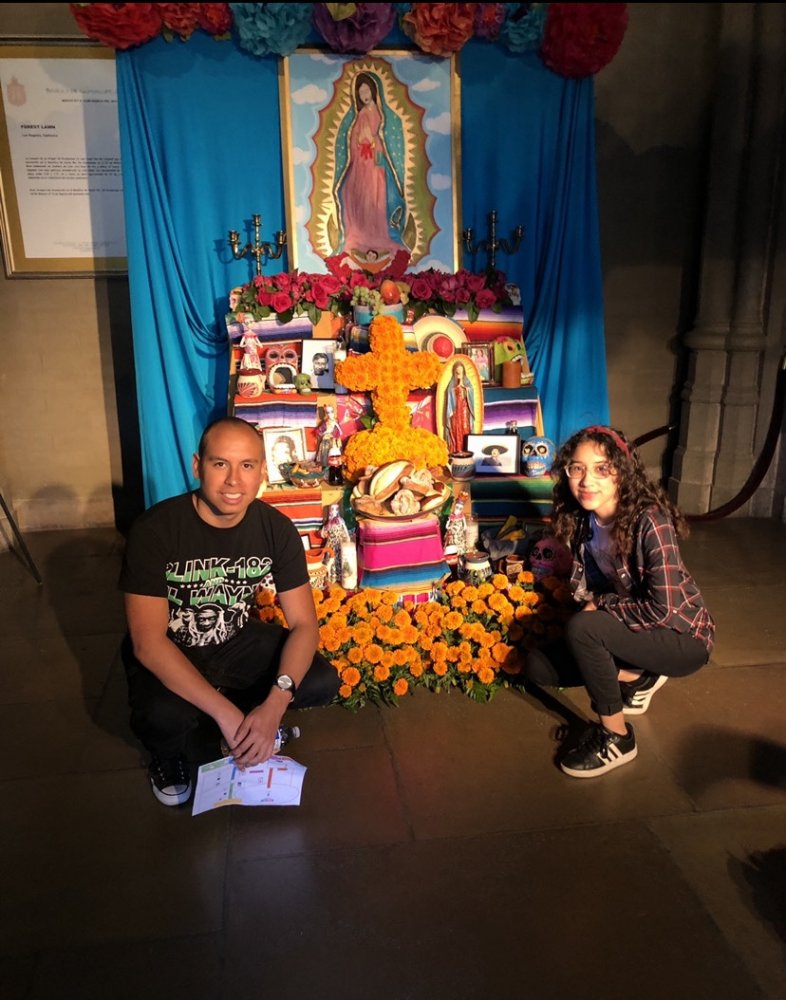 
As I made my way to the performance area, I saw many booths selling jewelry and cranes. “We [Forest Lawn] just like to offer free community events to the public and to the families that we serve,” said a worker at one of the booths. “We try to do family oriented events like this once a year.”

Workers sold paletas (Mexican popsicles) and churros; a person with a paleta or churro hand was in sight everywhere you go. The music also took away most people’s feet off the ground and the majority of visitors eventually began dancing and singing. “I’m having a lot of fun,” said Laura Macias, one of the attendees. “I love seeing these type of things that are typical of our land. I’m referring to the traditions that we have in Mexico.”

I saw several kids dressed in traditional Mexican suits and dresses getting ready in place to perform, so I made my way into the crowd in order to get a closer look. They danced to various iconic songs, including “Poco Loco” from Disney’s Coco’s original soundtrack, which made my whole day. Among the crowds were people in face paint, resembling La Calavera Catrina, a popular figure of muertos. After the kids finished dancing, the atmosphere turned even more exciting.

Many visitors believed that Forest Lawn did a much better job this year — from including more space to more people partaking in the event’s festivities by coming dressed up. “There’s more this year than last year,” said Sylvia (who did not give me her last name). “The food and the painting for the kids. Every year it’s expanding more and more and it’s getting more popular. What event in LA is free? First of all, let’s start with parking,”

They played Coco for everyone to see, laugh, and cry. The movie holds a dear place in my heart since it made me feel nothing but pride for my family’s culture and it made me develop a deeper love for my ancestors. In order to depict the movie’s story culturally accurate, director Lee Unkrich took multiple trips to Mexico and visited many cemeteries, museums and markets and absorbed every detail. Ukrich also ensured an all Latino cast in order for it to be authentic. Coco brought so many Mexican families together, including mine, since we could resonate with what we truly love — our families.

Although some movies that are heavily related to traditions fail at accuracy, Coco does a great job at highlighting how important Día de los Muertos is for Mexican families. The sight of seeing everyone united and close together warmed my heart. As a Chicana, or Mexican-American, traditional Mexican culture can be difficult to uphold sometimes — especially within my family. If it weren’t for Coco and school, I would’ve been clueless about Día de los Muertos.

I then walked to the arts and crafts area where there was a painting event in session, and after some thinking, I chose to paint a llama. Before sitting down to paint, one of the workers instructed me to carefully trace the already drawn-out llama on the regular piece of printer paper followed by placing it on top of the sturdy paper in order for it to appear. Since Mexico’s beauty consists of bright and vivid colors, I definitely wanted the color theme of my painting to reflect those characteristics. My dad stood beside me throughout the entire time and definitely got a kick out of laughing at my painting.

I then headed to the face painting section where many people waited in line. For my design, I decided to resemble La Catrina after being inspired by seeing so many people dressed up as her. After looking like her wealthy self, I felt both powerful and beautiful.

“I think art is very important for kids, and I think it’s a subject that can be a little disregarded in school so it’s super important to have community events where people are able to learn and experience art,” said Sydney (who declined to give her last name).

Hilda Galdavez, a coordinator of the festival, said that even though our loved ones are no longer with us in this world, we still remember them, and this specific day allows to show our love and remember the great that they used to be. “What a better way to gather all together as a community and show respect for our loved ones,” she said.

“[The event] is a way to help remember people,” said James Fishbern, museum director of Forest Lawn. “It’s about memory and celebration of life and culture. We’ve been celebrating art and culture and life for over 100 years in Forest Lawn.”