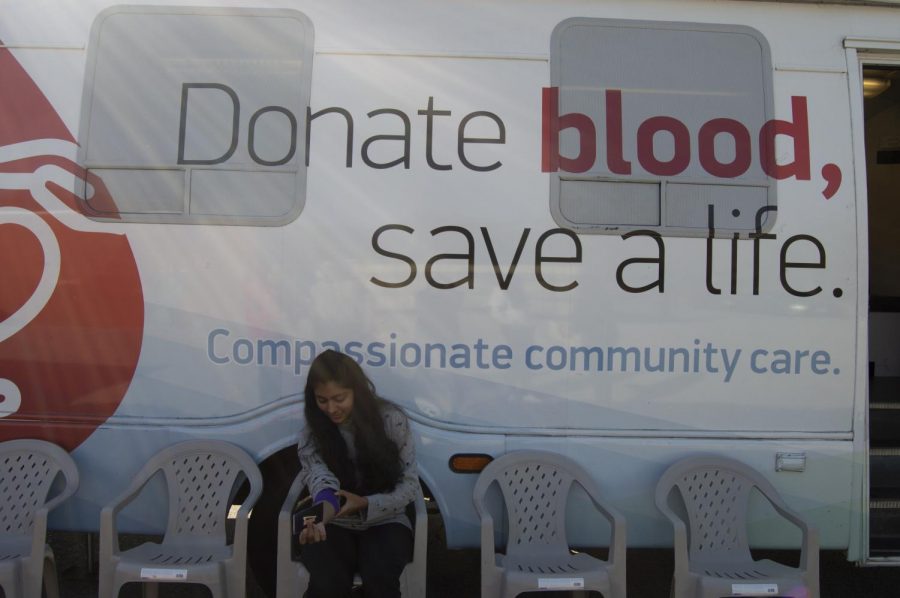 With the sun peeking through the opaque, cloudy skies and outrageous Southern California winds roaring against the feeble canopies, the mobile Huntington Hospital Blood Drive, overflowing with volunteers eager to donate, initially looked like a Hurricane Katrina disaster with registration papers spiraling in the air and uncontrollable lines scattering students all over the P.E. blacktop. But by 8:15 a.m., three senior Red Cross members were determined to battle the storm, fighting for an enjoyable blood drive began on Nov. 28.

Witnessing the unorganized event, my friends and I immediately scurried to the sign-in table, conveniently marked with ingredients for peanut butter and jelly sandwiches and a drum set-sized tupperware, containing Oreos, Nutter Butter, and other prepackaged foods. Seeing the chaotic mess on the other side of the table, my friends and I individually assigned tasks that balanced the workload. Senior Sangam Sharma interviewed students about their breakfast meals to determine if volunteers lacked nutrition or fluids in their body; senior Mavi Verde assembled blood donor educational documents to inform students about their eligibility and information regarding the Zika Virus; and Huntington Hospital Blood Drive coordinator Ida Diaz checked students into the registration lines and prepared nutritional meals to prep blood donors.  Thus, an orderly ladder was organized, effectively controlling the storm. But how did such a catastrophic event begin?

It all started with on Nov. 26 with the two-day notice.

Ring. The school landline interrupted the classroom environment, prompting students to raise their voices, for some odd reason. But even more of an oddity, the conversation between the mathematics teacher, Mr. Fred Blattner, and the anonymous speaker prolonged for five minutes. Usually, school landline conversations typically last for about 30 seconds ― asking for a student to leave class, for example ― but in this rare case, after the conversation ended, a stern look from the teacher’s face and his march toward his computer silenced the classroom.

With the loud keyboard noise juxtaposing with the inaudible classroom, students, nervously clicking their pens, worried about the teacher’s next action. “At the moment, I was praying for my life,” said senior Kryztyna Hernandez said. Was it a referral or another pop quiz? No one knew the answers until the thunderous keyboard stopped and all eyes followed Blattner to his podium.

Surprisingly, a uniform ding diverted the students’ attention away. That booming alarm echoed across the mathematics’ classroom, alerting students of a new assignment, but, strangely enough, the notification differentiated from the typical academic assignment. The new assignment labeled “Red Cross Blood Drive Sign Ups” puzzled Blattner’s students as they were unable to comprehend the assignment. In an instant, an abundance of student questions arose, asking about the intentions of the assignment, and some ironically asking for extra credit. Though their best efforts were rejected by their statistics teacher, an explanation was offered during those agonizing ten minutes. Ida Diaz, the coordinator of the Huntington Hospital Blood Drive, called the previous Red Cross advisor, Blattner, to organize the annual blood drive, early. Suspicious to the sounds of irregularity, senior students’ questions again arose and again were waved down with a wave of Blattner’s hand. “This year’s early annual blood was due to the urgency from the Paradise Fire,” said senior student Riane Galang.

The 2018 Paradise Fire — causing 86 civilian casualties, displacing nearly 50,000 people, and destroying 155,000 acres — became the largest and deadliest fire in California history. As a result of this devastation, a multitude of nonprofit organizations sought to help people affected in Northern California region through supplying aid. Thus, a swiftly arranged Huntington Hospital Blood Drive was scheduled for Nov. 28, requiring a minimum of 30 participants to donate their blood for the Paradise Fire victims. However, with time limiting the opportunity to spread the word, the pressure came under the senior Red Cross members, having to quickly inform students over the age of sixteen to donate their blood. But with only three days ahead, the task at hand was presumably impossible as students ignore the call for help on the first day.

Decorating every classroom door and stairwell with Huntington Hospital Blood Drive flyers was not enough to catch students’ attention, at least on the first day. Taking an unconventional approach, the senior Red Cross members urged students to accomplish a goal of 30 participants through emotionally encouraging students about the ongoing displacement after the Paradise Fire and even hinting incentives after blood donations — In-N-Out or Baskin Robbins gift cards. “Knowing students will not just help out of their kind hearts, we had to encourage and inform students about the blood drive for a clearer understanding of the cause,” said senior Mavi Verde.

On Nov. 28, however, senior Red Cross members were not expecting such a big turnout, based on the response and information collected throughout the informative period. But with 40 participants volunteering to donate their blood, an uncontrolled storm soon hovered over the volunteers’ shoulders — the multitasking and directing of student donors. Students dispersed throughout the P.E. area, unable to clearly pinpoint the location of the mobile Huntington Hospital Blood Drive.

Affirmative action needed to be made. Despite the unforeseen weather conditions, we organized three distinct stations for students to donate. After arriving at the first station, the interview process, students were directed to a seating area where Sharma asked students a variety of questions to ensure students had an adequate breakfast. Moving onto the second station, Verde supplied students with a survey and informational prerequisite for donors, which indicated the safety precautions and eligibility requirements. After officiating the eligibility process, students were directed to the registration lines, where they were then were directed to the blood drive line After the 45 minute donating process, students were immediately required to rehydrate their veins with Gatorade and nutrients from a peanut butter and jelly sandwich while being rewarded with a gift card of their choice.

After repeating the same process for 39 more times, a successful blood drive was concluded and the goal of reaching 30 participants was achieved.

“I found that the Red Cross officers were very responsible and responsive to their Blood Drive and we [Huntington Hospital] are very grateful for their commitment to us, as we are the only trauma center in all of San Gabriel Valley,” Diaz said. “The students were very willing to make a difference with this act of kindness and we hope to see more students this February [at the next blood drive].”