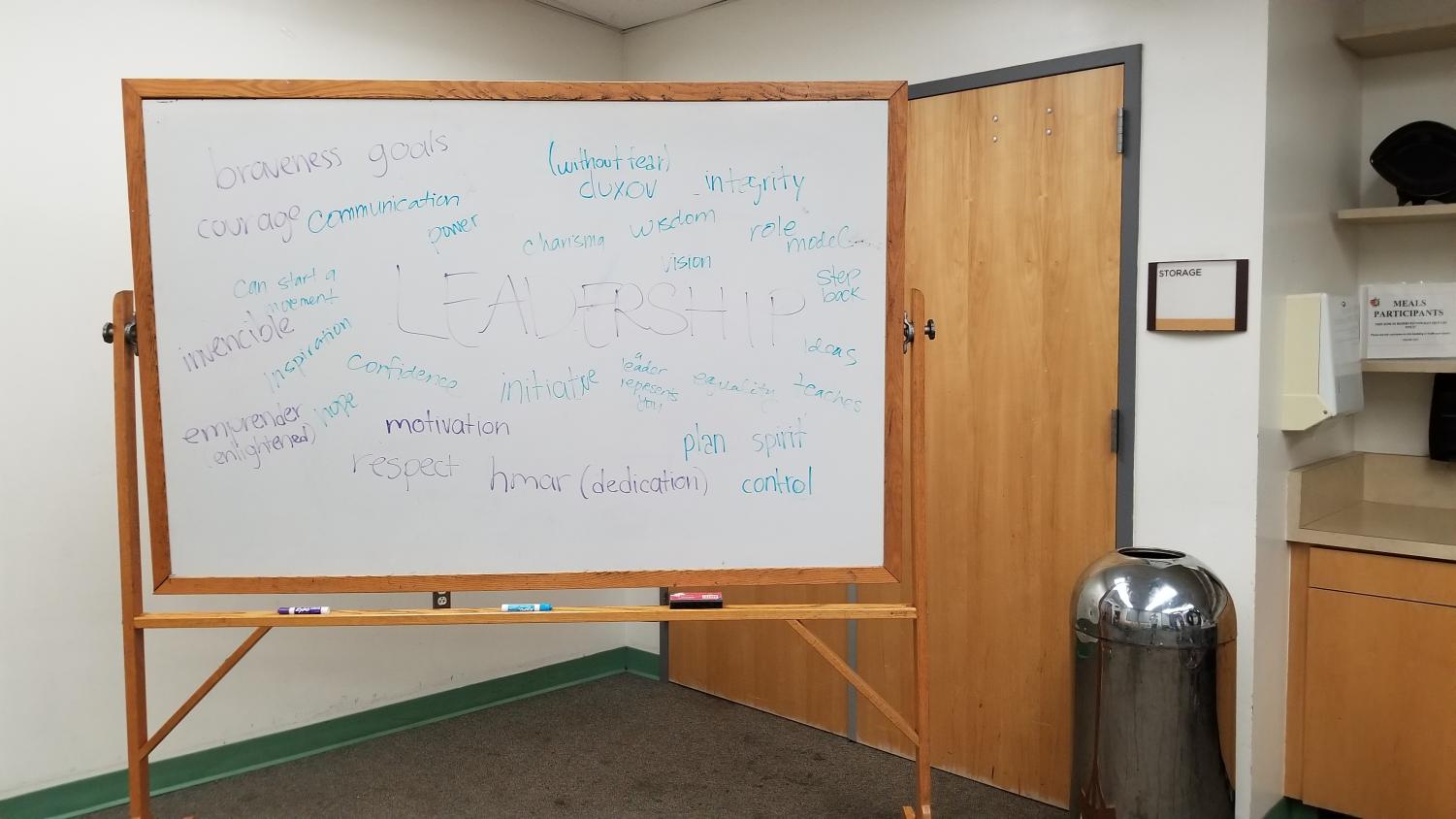 Teens attending the workshop had the chance to add words which described leadership to the whiteboard. (Carlos Rodriguez)

Teens attending the workshop had the chance to add words which described leadership to the whiteboard.

Teens learn how to become leaders

A welcome addition to a biweekly night out

The Pacific Community Center, located on Pacific Avenue in Glendale, is most known for its surroundings which consist of a public pool and the neighboring Thomas Edison Elementary School. Inside the center itself, however, teens gather every other week in what is called a Teen Night Out.

The Teen Night Out on Sept. 14 was one to remember, for there was a guest speaker in attendance whose mission it was to instill leadership skills in the teens living in the city, and more specifically, those who will grow up to be the leaders of tomorrow.

I went to the Pacific Community Center at 6 p.m. expecting to meet some new people and have a great time while learning something beneficial.

Once inside the center, I went upstairs and into a room where there were quite a few students sitting in chairs which had been lined up in a specific way. After looking around for a few seconds, I recognized a couple of students from Clark and knew then that the event would be rather exciting. From then on, I talked to a few of them and noticed a woman who seemed to be preparing some activities for the event, which I rightly believed to be the guest speaker at the event.

Tosin Balogun, the guest speaker, outlined her reasoning for coming to the Teen Night Out for the second time. “I work for the County Office of Education and I work with young people to grow their leadership skills,” she said once the event had concluded. “I help people learn about developing themselves because, as one teen said at the workshop, you don’t learn about these things in school and it is very important to develop who you are in a fun way.”

Jackie Baliton, the recreation program specialist for the City of Glendale, explained what Tosin Balogun has done to help the Teen Night Out program. “While working in collaboration [with Balogun] for over three years, we have supported each other by sending our #MyGlendaleTeens to Friday Night Live’s teen summits focusing on safety, and leadership development. In a joint effort, Youth & Family Services and Friday Night Live continues to have a positive influence on our teens,” Baliton said.

This particular workshop began with an ice breaker where Balogun announced that we would be playing a game called Entourage, the word itself referring to “the people who surround someone.” The basis of the game, she explained, was to play rock-paper-scissors with the person next to you and join the team of whoever won. One would then play the same game with someone from another team and the teams would grow in size until only one team was left.

As soon as Balogun told us to begin, I played rock-paper-scissors with the person next to me and, unfortunately, lost the game, meaning that I joined his team consisting of only the two of us. He proceeded to play with another individual and, soon enough, one large team had been formed. It all happened so fast that we were all left feeling rather confused at what had happened. Balogun told us to sit back down in our seats and explained what we learned from the game.

Junior David Saryan, who was my team member in the game of Entourage, said that the game gave him insight into leadership. “The activity taught us leadership, such as when we had to pick which team member would play rock-paper-scissors with the chosen person of another team. It was a bit chaotic at times because of the fact that everyone was trying to win, but that made the game even better,” Saryan said.

Balogun wrote the word “leadership” on the whiteboard and asked for two volunteers to come up and write down two qualities of a leader. After they wrote “courage” and “integrity,” we raised our hands and gave our own definition of what it means to be a leader.

For the next activity, Balogun said that there were quotes about the qualities of a leader written down around the room and that we should look at each one and go to the one that spoke to us the most. The quote that I picked echoed the belief that a true leader doesn’t stand idle when his followers suffer but instead suffers with his followers; the quote did not feature any attribution. When Balogun asked one person from each group to explain why they chose their quote, I said that it spoke to me because “if a leader does not suffer and stand with their followers when they are suffering, can he really call himself a leader?”

When we sat back down at our seats, Balogun gave us a double-sided paper; one side said “myself as a person” and the other “myself as a leader.” She told us to fill in the traits described on each side and then raise our hands and explain the differences between the two. For my traits as a person, I put things that describe who I am as I live my life such as wanting a drum kit and being curious about life as a whole. When it came time to write my leadership traits, I wrote down fearing regret and picking others up when they are down. Some traits, however, were the same on both sides, such as needing moments of self-reflection.

The final activity at the workshop was similar to musical chairs, according to Balogun. She told us to move our chairs so that they were in a circular formation and then told us that the game was called I Love My Neighbor. The basis of it was for her to begin the game by saying “I love my neighbor who” and then something that applied to at least one person in the room, such as “is wearing a black shirt.” Those people would then stand up and find a chair before they all ran out. Whoever was stuck in the middle would say the “I love my neighbor” line and the game would thus continue until time ran out.

Junior Raj Kapoor said he enjoyed playing the game, as there was a chance for people to know what they have in common. “I liked it because lots of us were wearing similar shoes and clothing and we were able to notice that while having a few laughs along the way,” Kapoor said.

After the game had ended, Balogun thanked us for having done such a great job in participating in all of the activities, and we thanked her in return. Some people went to play basketball on the courts next to the community center and others went home for the day having learned quite a bit about the traits that make up a leader.

In addition to this leadership workshop, local organizations offer opportunities for teens to expand their knowledge of leadership.

The Los Angeles Police Department, for example, formed what is called the Cadet Program in 2007 in order to demonstrate to teens the qualities of those who enforce the law on a daily basis and the initiative undergone to do so. Cadets gain the ability to attend training meetings once a week in which physical training occurs and learning is done via the classroom. Best of all, cadets can volunteer at times to assist law enforcement officers in special activities, whether it be planning or actually doing them.

Closer to the City of Glendale, the yearly Youth, Leadership and the Future Conference, organized by the Character and Ethics Project, takes place each year at Glendale Community College. The most recent event in 2017 drew many high-performing students of Glendale schools to attend. In perhaps the most memorable moment of the conference, a partially paralyzed individual named Paul talked about the things that are possible with determination. With the help of his mother, Paul was able to live a life in which his disability did not slow him down but instead pushed him to keep going.

Moreover, the Glendale Youth Alliance, founded in 1993, helps to provide low-income individuals between 14-24 years of age with the skills necessary to work in a job via preparedness training. The alliance helps to empower and educate those seeking a job by providing youth with the ability to realize their full potential in programs such as the Glendale Youth Employment Partnership and the Employment Incentive Program, among others.

Additionally, the Verdugo Hills Council Boy Scouts of America offers programs to over 3,000 youth in the County of Los Angeles and instills in them the values of the Scout Oath and Law. The overall mission of the local council, and the national organization as a whole, is to teach young people to make ethical and moral choices so that they can become responsible citizens that participate in the community as much as possible.

Amy Taylor, a field service executive for the council, said that Scouting is an excellent opportunity for individuals to learn leadership. “Boy Scout troops are between the ages of 10½ to 18 years. The structure of the program allows the youth to be in leadership positions within the troop and also at the Cub Scout level. Ranks advancement helps the youth learn about leadership by the merit badges they earn and the community service they do,” Taylor said.