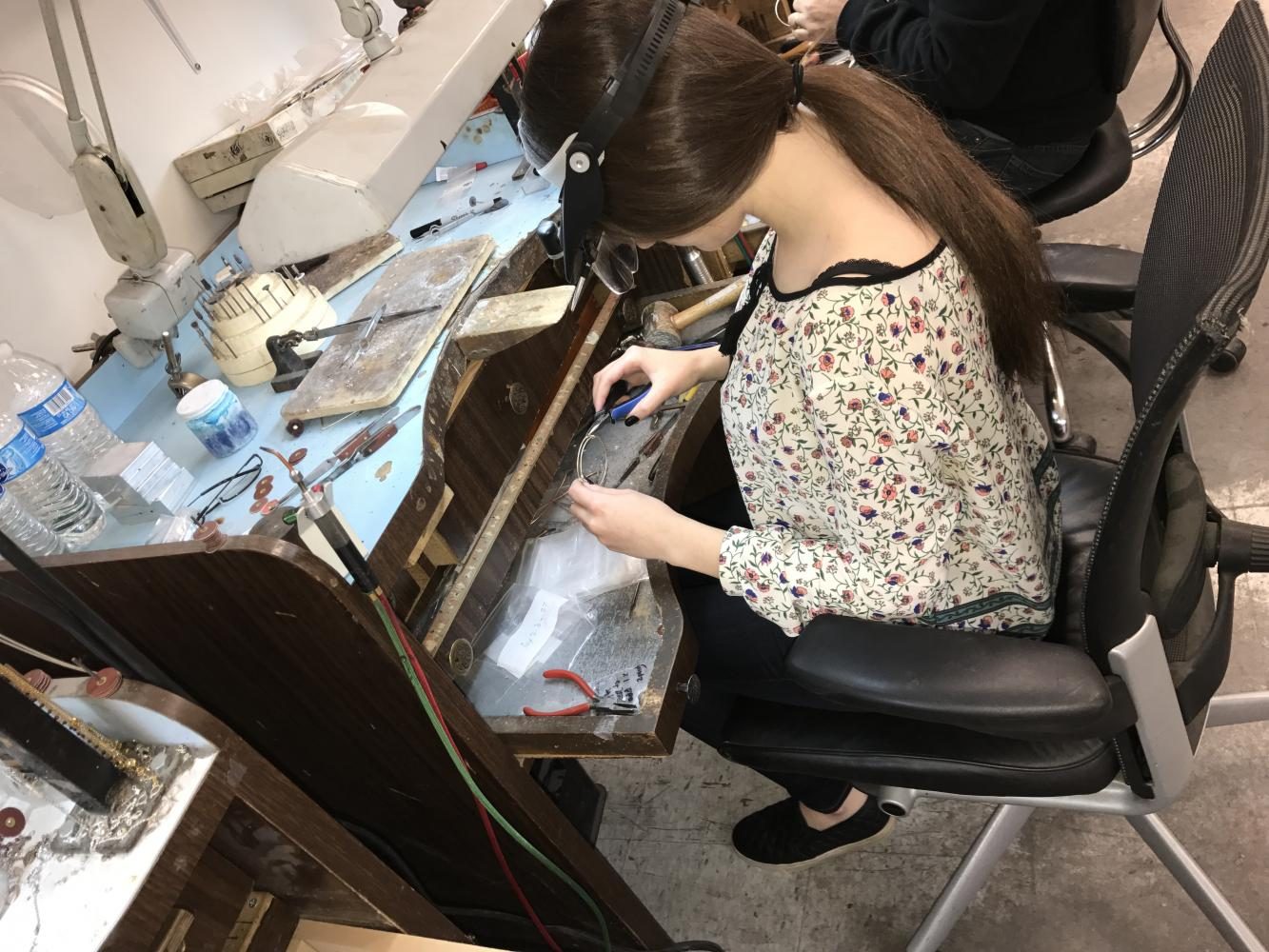 Working on the beaded bracelet.

Exploring the creativity behind jewelry making

I walked into a room filled with machinery designed to do sophisticated tasks too hard to complete with human hands. These are machines that have been created over a long period of time to aid in creating jewelry. Before there was the machinery to create these accessories, people crafted tools to assist them. These tools, such as those made with rocks, would contribute by being used to give shape and style to the metals.

However, the jewelry industry has come a long way and has created technology to provide the most efficient and perfect looking pieces.

The Krissybee Designs company located in downtown Los Angeles that I was visiting had all the advanced technology to create these various types of jewelry from silver. These machines included a wax injection machine and and a mold forming machine. The most interesting of all was the machine used fire to melt the silver which would be used to create the different patterns.

“We need to be very careful with this one because we are dealing with fire which can be very dangerous,” said Hakop Brdotyan, the owner of the Krissybee Designs, who was demonstrating the process of melting the silver. “It’s also crucial that we wear the protective glasses for safety.”

I had an interesting task of preparing the wax tree used for the casting. Using a heated wax point pen, each single piece of wax was placed on the main sprue that was placed on the rubber base. The wax would later melt when put in the oven. Some of the wax that I placed on the tree were rings and cross shapes to make necklaces.

One of the employees of the company sitting next to me was completing the same task except in a lot shorter period of time. I was amazed at how much care she put into each piece, and yet she was able to finish each piece in almost half the time it took me to finish a piece. The process was tedious, and one had to be very careful and attentive in order to place each wax on the designated spot on the tree.

Although there is a great deal of demand for jewelry in the market today, much competition still exists between the different companies that produce these beautiful pieces. According to a report by Edahn Golan Diamond Research and Data, since 2015 jewelry sales have increased 1.4 percent in the United States. There is a lot of competition especially in busy, industrial cities like Los Angeles, where I went to visit the Krissybee Designs company.

Downtown Los Angeles is full of jewelry-making industries that often find themselves in close proximity of each other and sometimes even reside in the same building. From the thousands of jewelry companies in the world, the one that is in possession of the best and most accurate technology that will help them create the most beautiful pieces without any imperfections and exhibits the most creativity, tastefulness, and elegance in their designs is the company that will attract the most customers, according to Fire Mountain Gems and Beads, a jewelry supply company.

In a Los Angeles Times article from 2016, according to retailers and industry analysts, “the people who historically bought high-end jewelry in the downtown district aren’t shopping as much as they used to.” This shows that the addition of new stores makes it more difficult to attract customers. It also reflects on how times are changing, and people are finding themselves buying more items that they actually need rather than just decorative pieces.

Visiting this company did not quell my interest to learn about how the jewelry-making process works. When I learned that on March 5, the creative crafts store, Michaels, located in the Glendale Fashion Center,  would be offering a class in jewelry-making, I jumped on the opportunity to further my skills and learn more about the art form that jewelry-making is. Although the class was not nearly as exciting as being in a huge jewelry-producing company and working alongside actual, experienced employees who love their jobs, I was still able to learn in the class about basic jewelry making techniques using simple materials such as beads.

The class was a beginners bead stringing class, and the final goal was to make a bracelet. There were not a lot of people in the class so I was really able to concentrate on what the instructor was saying throughout the 2½-hour long class. The instructor was encouraging and took time to explain the reasoning behind the steps and make sure that no student fell behind. The class only cost $15, but unfortunately, the supplies that were to be used were not included in the package. One of the many important ideas and concepts that I took away from being in this class from 6:30 pm to 8:30 p.m. is that color coordination plays a significant role when creating jewelry. “When all the beads are attached and the bracelet is created, then the whole color really comes together,” said Tina Parmas, the instructor. “It’s also easier to learn the technique when using color beads rather than colorless because you can really see what you are doing.”

Color coordination is key when using different materials that come in a variety of colors. By being in this class, I learned that it is not only the size and shape that determines the beauty and value of a piece of jewelry, but also the color. We were given two bracelets to examine at one point during the class to prove this idea. The two bracelets were identical in shape, size, and design, but one of them had a clear color pattern while the other one was a random mix of colors. The bracelet that was consistent in its colors was much more appealing to the eye than the one that did not have a color pattern, which merely looked disheveled and unorganized when comparing the two. “Besides how shiny or sparkly a piece of jewelry is, one of the main aspects of jewelry that draws in a customer is color,” Parmas said.

Paul Guillemette, an independent jewelry designer, also understands the importance of having a clear design and vision when creating pieces. Guillemette started his career in the jewelry-making  industry by creating jewelry with ceramics. “Jewelry is highly competitive, wood jewelry, not so much,” said Guillemette. “I don’t feel like there is competition for what I do exactly, but competition in the jewelry industry in general is high. People that appreciate hand made artists’ products come to me and not the big corporations.”