Venturing out into enemy territory

Fish out of water or King amongst men? 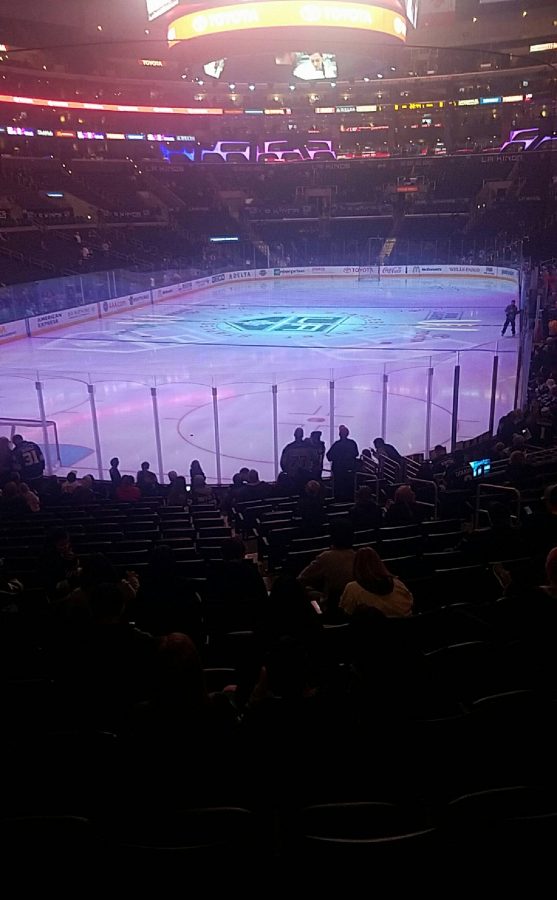 The fresh ice of the night the Kings would fall 4-3 to the Canucks.

It was much colder than I expected it to be, granted the sport is played on ice. “I should’ve worn something under this jersey,” I thought to myself as I sat down and felt the cold air run through me. Many who may have seen me sitting in section 106 row 20 of the Staples Center were probably thinking “Why is he wearing that jersey at all?”

I’ve been a Canucks fan since I first visited Vancouver in 2010. The 2010-11 season was the year they took the Boston Bruins to game seven of the Stanley Cup finals, only to be shutout 4–0 at home. Things have been pretty downhill since then, yet we fight on through a playoff drought and now finally a full-on rebuild.

It’s not that I dislike the Kings. I usually would root for them if the game were against the Ducks, the Sharks, or pretty much any other team in the league. Except, of course, Vancouver.

The night of cold, hard stares began far before my entry to the Staples Center. On the Red Line — LA’s version of a subway — there was what seemed like an army of black and grey sweaters giving me stares. I sat proud and alone in my white sweater as a swarm of people who were totally unsuspecting of a lucky Vancouver win passed me by on the train.

“No. Just no,” was the first comment I got for my jersey. A particularly angry individual decided to confront me at the end of the game, after the then-playoff-cusp Kings failed to fulfill a comeback which allowed the playoff-eliminated Canucks to take the 4–3 win down to Anaheim for their next game the very next day (which they also won, against all odds).

During the second intermission, an intoxicated fellow with a viking-like beard who was sitting in the row in front of me began exchanging some very confused remarks with me. “The Canucks suck!” and “Are you Canadian?” were a couple of the less vulgar ones.

Although this was harmless stuff in my view, it got me thinking: “Do sports promote a negative attitude in society?”

“I think there could be an element of negativity and maybe anger in the way society deals with sports,” said sports fan and Clark junior Garen Kejejian. “I think some people definitely take it too far at times.”

Take my very own Vancouver Canucks. They became one of the most disliked teams and joined the ranks of many other Canadian teams in the NHL for one of the biggest riots in sports history. Following their 2011 defeat, massive riots sparked near Rogers Arena and many were wounded一140 to be exact. Cars were burned, businesses were looted, and bottles were thrown at outdoor viewing screens. It was one of the most violent acts in the history of the clean-slate city.

As a fan of the Canucks, I knew what I was getting into going to the Staples Center in that jersey. Although “rivalry” is a strong word to use for the matchups between these two, there is a heightened level of competition when the two of the westernmost teams in the western conference of the NHL meet. This was a do-or-die game for the Kings, so I understood everything about the fans’ angry remarks to me. Yet I still stayed for 60 full minutes of the Kings’ pain, including the final 20, in which the they scored three goals and were on the tip of the mountain of a comeback. The comeback failed, obviously, and I prepared myself for the worst.

“I honestly have no idea what you were thinking. Why would you go to the game in Los Angeles, as a person who is born and raised here, as a Vancouver fan,” said my brother, a semi-hardcore Kings fan.

What can I say? The city of Vancouver lured me into their hockey culture, regardless of the fact that they’ve never won the Stanley Cup.

Now, here’s a different scenario: April 6, 2017 — the third to last game of the season. The Kings unwillingly welcomed the Calgary Flames, a team who has gotten under their skin every game season. At this point, the Kings were way out of a playoff spot, and they played like it too.

A month prior when these teams met, Kings alternate captain and Norris Trophy winner Drew Doughty was the victim of a dirty elbow by a young man by the name of Matthew Tkachuk, a man who is now considered to be the equivalent of a convicted felon among some Kings fans. I went to voice my hatred.

There are many teams I hate in this league. Anaheim, Boston, Chicago, and Toronto are obvious ones. But one team never fails to spark the deepest hatred from within my soul. This team is the Calgary Flames: not only one of the luckiest and most niche teams in the NHL, they play like goons but act like skilled players. Not to mention they are Vancouver’s greatest rival, which gave me a reason to wear my Canucks cap on top of my Kings hoodie.

This was a much different train ride than a month ago. A few fans found each other on the platform, including my brother and I, and we made our way to the Staples Center together. This time, I could be the distributor of dirty looks, and believe me was I ever. Although the playoff-bound Calgary defeated us in the end, there was no shortage of boos every time Tkachuk got the puck, including a woman sitting right by the glass who yelled “kill him!” as soon as he touched the puck.

The takeaway from the two experiences is this: There are very few things better than being a proud sports fan. Whether it’s the feeling of being a lonely force in support of the opposing team or being a soldier among the Kings men, the feeling of being involved in the success and even the loss of a team you love is irreplaceable. And for this reason, sports are a very necessary part of the world we live in.