Art revitalizes women from the past

Revisiting history from a different perspective 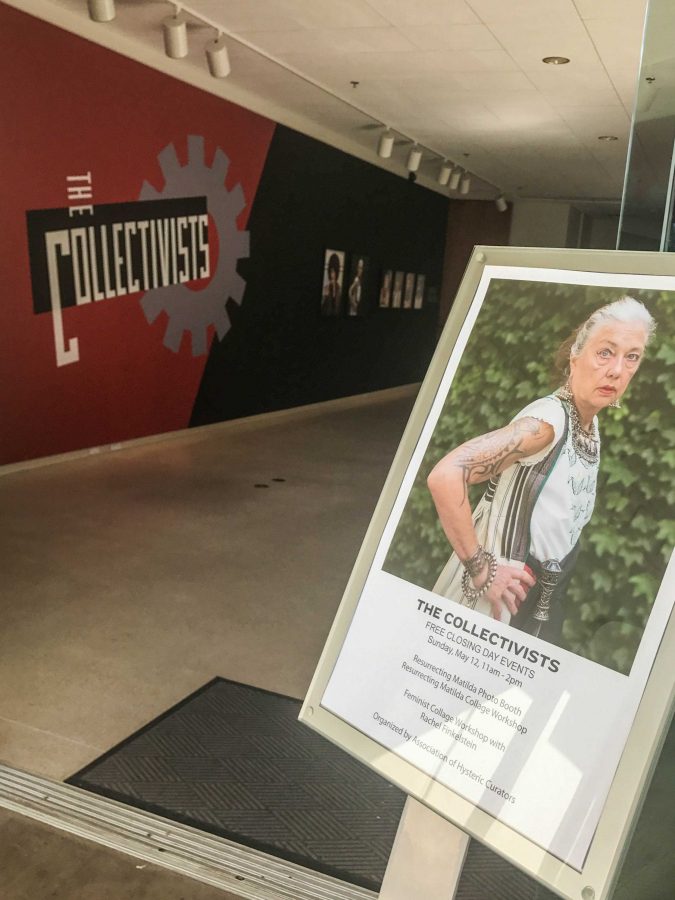 The entrance to the workshop and gallery.

Stepping inside a completely empty building, I entered a small, black room and came face-to-face with a painting of David Bowie looking pensively back out at the entrance. As I stopped to examine the painting, I heard my footsteps echo off the walls, which built an eerie yet exciting atmosphere in the room.

Glendale’s Brand library and Art Center is known for hosting art exhibits from time to time. The last time I had visited the center, they held a fascinating exhibit on the Armenian Genocide. This time, from Jan. 21 to March 12, the library was holding a new exhibit called “The Collectivists.” When I heard the exhibit would feature a theme regarding women, I knew I had to go see it.

“The Collectivists,” curated by Kara Tome, displayed the work of over 60 artists, each belonging to six artist collectives, or groups of artists, working together with a shared purpose. These six collectives were Durden and Ray, Eastside International, Manual History Machines, Monte Vista Projects and Tiger Strikes Asteroid. While the exhibit featured a lot of abstract artwork, the sculptures and politically-aimed paintings caught my eye the most. It was clear there was a feminist theme among many of the paintings such as Andrea Marie Breiling’s The March (2016). Most of the art was contemporary, including some created in 2017.

As I walked around with my footsteps seeming to trod behind me, I entered a large white room. It felt like I was in heaven, especially with the tall, church-like windows that had a nice view of Brand Park’s natural setting. The exhibit was fairly small, but that is because the building isn’t very large. As I finished, I noticed that the exhibit and The Association of Hysteric Curators would be hosting a closing day “Events and Workshops,” which would include feminist collage making, taking photos in a photo booth project and crafting jewelry.

On March 12, I took part in “The Collectivists” workshop. This was quite possibly the most interesting community event in which I’ve participated. Hosted by artist Rachel Finkelstein, alongside other women, this workshop was both an empowering and educational experience. I entered the room to find women crafting, including some dressed as women from history having their pictures taken. Around 40 people had come to partake in the workshop, including men and children.

I took part in the feminist collage making. My instructor was Mary Pomonis, the AP Studio Art teacher at Hoover for more than 17 years. My project was essentially to pick a photo of a woman in a pile of pictures I was given, and then to try and find parts in the textbooks provided where that woman should be included. Pomonis said that she, along with Hoover photo teacher Allison Stewart, are the founders of the Association of Hysteric Curators, a “feminist arts collective.” The foundation was created to “provide a support mechanism for female artists at various stages in their careers,” Pomonis said in an e-mail interview.

As I looked through the pile of photographs, I came across a colorful photo of Henrietta Lacks, the progenitor of the HeLa cells, an important set of essentially immortal cells which continue to be researched heavily. After learning about her, I cut up photos from the textbook from around the 1950s-1960s era and pasted them onto a pastel-blue piece of paper. To make it more textbook-like, I added timelines and other bits of phrases.

Zeal Harris, a visual artist, had posed for the photo. “I chose to represent Henrietta Lacks because I found her story fascinating,” Harris said. The women photographed were part of the Resurrecting Matilda project, which Pomonis worked on with Stewart. “Resurrecting Matilda is titled for the Matilda Effect, which refers to the historical erasure of women from science textbooks, or their discoveries being given to their peers,” Pomonis said in an e-mail interview.

I was surprised to find that Hoover’s principal, Dr. Jennifer Earl, was also involved in the project. Earl was photographed as Dr. Katherine Clarenbach, the founder of the National Organization for Women. Earl was involved since she “recognizes the importance of representation to the field of History.”

Turning pages in the textbook, I found it to be oddly familiar. Pomonis said that the textbooks were donated by a retired middle school teacher and that the books were used in GUSD schools. As I looked through the book, I realized how no individual women were discussed in the sections. As an avid advocate for equality, I had not realized the full extent to which women were unequal in a physical representation until this workshop.

Pomonis said she was passionate about feminism because of the “historic disenfranchisement of women from arts and culture.” As I further researched this, I came to discover the realities of occupational sexism, and how women often lose jobs to men solely based on their gender. “In America, 80 percent of the students in art school at the University level are female, while men represent 80 percent of the artists in museums and galleries. Similar statistics exist when looking at textbooks. How is it that every high school student knows about Shakespeare but practically no one can name the world’s first poet, Sumerian priestess Enheduanna or the first novelist, Mirasaki Shibuku?” Pomonis said in an e-mail interview.

Stewart was a participant in the workshop on pin making. “I had so much fun,” Stewart said. Finkelstein used recycled materials she had at home to help Stewart and others craft pins and jewelry. Costumes and props were laid out by the entrance for those wanting to be part of the photobooth project. A young girl dressed as Amelia Earhart stood out among the crowd.

What started as a simple desire to delve deeper into my understanding of art became an awakening of my understanding of feminism and history. Though it felt strange to cut up and glue textbook pages, it was an interesting experience. I had never contemplated the extent to which women were underrepresented in history, and had never really made a collage like that before either.

The workshop was also a platform for other art students to get experience and participate in an art-based environment. Hazel Handan, one of Pomonis’ old students and a current UCLA undergraduate, was there photographing the photo booth, collage and jewelry making workshops. According to her biography, her artwork mainly centers on “institutional critique, intersectionality, and the experience of being an undocumented student and woman of color.”

“I’ve been fortunate enough to have been involved in an art gallery before,” said community participant and artist Shakeh Aslanyan. “Growing up, art has been a huge part of my life and it’s an amazing thing that women create these kinds of events to support each other, especially in the art field.”