Art and fun in the form of parkour 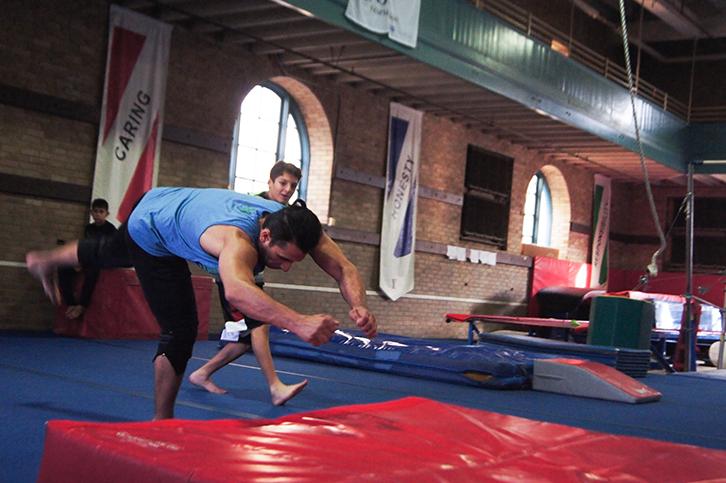 Coach Varag Hakopian demonstrates a front flip to his kids.

I miss my childhood. As a child, I didn’t have to “know better.” I was daring. I could roll and jump and climb in every nook and cranny anywhere, in any position, and I didn’t fear judgment. Other children egged me on to experiment more, not less.

My recent beginner’s parkour sessions at Tempest Freerunning Academy in Los Angeles were surprisingly reminiscent of those days. Tempest prides itself on being “California’s first and only training facility solely dedicated to the growth and spread of freerunning and parkour.” There, I groomed and indulged my nostalgia one hour at a time. I was able to do the crazy movements of my childhood at my classes, but better, being more mature and capable now.

Parkour is applicable virtually everywhere that’s not an open field. It’s like a freer, more practical form of gymnastics. Both disciplines require a great deal of coordination, balance and body awareness. Parkour soon might also join gymnastics as an Olympic sport, according to the European Olympic Committees — impressive considering its youth. Parkour was popularized only recently, in the late 1990s, mainly by Frenchman David Belle. Based on Google Trends’ measure of search interest over time, it reached its heyday in the early-mid 2000s, and has since been somewhat less popular, but still consistent in its popularity. Beginner student Daniel Harrison, 26, seemed to recognize as much. “I first discovered parkour in middle school online, back when it was at its peak.”

Parkour is hard to formally define and to distinguish from its close relative, freerunning. My gym Tempest’s FAQ claims that parkour is focused on “efficiency of movement from point A to point B,” while freerunning is more artistic, focused on “freedom of movement” and the journey, not the destination. The World Freerunning Parkour Foundation appears to agree. However, my coach Jason Lockhart uses the two terms interchangeably, as does ParkourUK, the UK’s governing body for parkour.

Whatever you call what I was doing at Tempest, it was a blast. Coach Jason, who’s been training for four years, concurred. “Part of the reason I started parkour, and the main reason I’m still here, is that it’s extremely fun.” That seemed to be the consensus opinion around the gym, and I’d guess it’s shared by almost anyone willing to do a new and extreme sport like parkour.

Tempest’s gym itself looks like the setting of the best kid’s birthday party I never had, with its foam pits, jungle gym, trampolines and castle — all vividly colored, often decorated with Mario or Minecraft artwork. There are kids’ classes, and there are birthday parties, the latter having introduced my classmate Daniel to the gym, but overall Tempest’s casual looks deceive. Many of the gym members are in great shape and have been committed to parkour for years. They have the lean, nimble bodies necessary to manipulate their body weight efficiently. Some veterans, though, are surprisingly bulky, seemingly without sacrificing performance. I’m glad I met the age requirement for the beginner adult class, 17, because otherwise I’d be stuck in the earlier class with kids as young as 9, and not be training concurrent to some phenomenally talented people in the advanced class.

I arrived late for my first session, in the midst of the warm up, and eventually realized I should follow the line of students roaming the gym. Fundamentally, the warm up was similar to that of the martial arts classes I’d taken as a kid. It was just much more dynamic. We didn’t stand in a big circle statically stretching for 10 minutes. We jumped over things, climbed onto them and ducked under them. I felt like a hotshot keeping up with others without having previous experience there. The obstacles were easy to traverse.

Imagine my surprise and stupor when we reached the jungle gym, and the people in front of me in line took turns walking leisurely on top of the thin 7- 8-foot tall bars. My turn came, and I looked ahead with dread. For a moment I was ready to walk and swallow my anxiety instead of my pride. Thankfully, my lifelong fear of heights kept me still long enough for one of the staff members, Coach TJ, to yell that I could just climb through the bars. It turned out I was trying to keep pace with advanced students who had a different class with the same hours.

Coach Jason focused our class on the fundamental parkour movements. We started with parkour (PK) rolls, which teach you how to fall safely  — once you hurt your shoulder and bump your head on the mat a few times. “Don’t think,” Coach Jason told me after I failed a few rolls. That worked better than any cue he tried. This is a sport based a lot on intuition and independence. You move and experiment as feels comfortable. You advance when you’re ready. It’s a highly personal journey, and all the friendly faces at Tempest seemed to understand that. They are all, however, a cautious group. “The most important thing in parkour is to know your limits,” Coach Jason said. “Don’t jump off the roof your first day.”

We continued with more movements, and between precision jumps, cat leaps and kong vaults, I picked up the lingo, and it was nice to end the day with some simple pullups.

I took advantage of the open gym offered after class hours. Most people, even the veterans, like to unwind on the massive trampolines during this time. At open gym, my classmate Daniel taught me how to do a pullover, my crowning parkour achievement so far. In a pullover, you do as the name suggests. You pull your legs and then the rest of your body up and over a bar, until your arms and body are straight and vertical over the bar. Halfway through my attempt, I got stuck upside down above the bar for about five seconds, and my face was beginning to resemble my colorful surroundings. I eventually managed to drop my legs, and I stood tall over the bar with pride.

Parkour classes have reached the Glendale area too. At the Glendale YMCA’s gymnastics center, kids train basic movements with 26 year-old coach Varag Hakopian, who’s been doing parkour in some form or another since he was a child in Iran. Like many parkour practitioners, Hakopian didn’t start with any formal training. He learned from David Belle and Jackie Chan movies, and invented moves with his friends. Hakopian’s students are mostly young children, but he has older students like Clark sophomore Ayedin Mahmoudi, a trainee for several months. Mahmoudi likes parkour for its applicability. “It gives you abilities you can do that others can’t,” Mahmoudi said. He’s used it to climb Hoover’s goalposts, Clark’s basketball hoops, and other urban zones.

Hakopian and Mahmoudi’s training center is a lot less flashy than Tempest’s, but it too has obstacles to maneuver through. It only fails to provide what other gyms can’t either: The body and mind to overcome its obstacles. That only comes with training, which Hakopian tries to stress as diligently as a coach can with mostly elementary and middle school  pupils. The kids get lazy and distracted sometimes, but they certainly don’t treat parkour like a chore. Their faces have a way of lighting up every time they get to learn and then show off a new flip or spin. Hakopian, a humble man, tries to be as curious as his kids. “In order to learn something new, you need to always be a student. If you consider yourself as a master, you never learn,” he said.

Parkour is a truly global discipline. It’s realistic and functional. It requires that you have anything but an open field. You work your way around your environment instead of creating an artificial one. “You can say parkour is new, but it has a really long history in humans,” Hakopian said. “It’s the art of movement. Humans were using it during war, while climbing, while running. No one called it parkour, but they were passing through blocks and overcoming obstacles a thousand years ago too.”