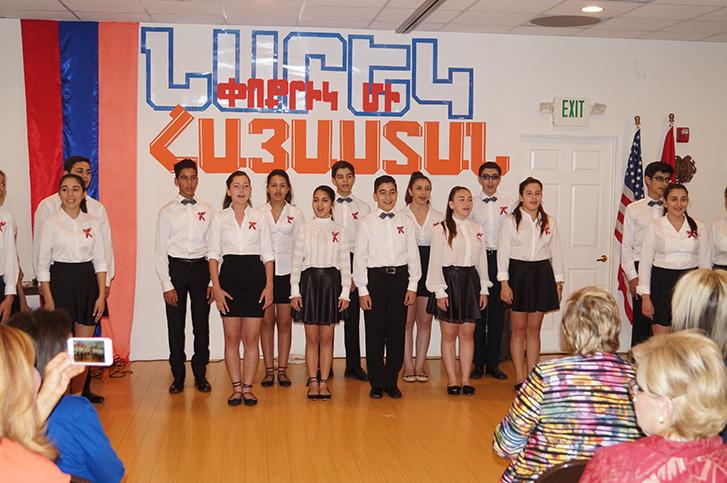 A graduation to remember

A big Armenian flag hung down from the wall behind us. “Narek: A Little Armenia” was written in Armenian in big, bright letters using the colors of the flag: red, blue and orange. All around our group of 22 soon-to-be graduates were posters filled with Armenian quotes by famous authors and other significant figures from Armenian history. An audience of about 50 family and friends sat in rows facing us.

We stood in this familiar classroom for the last time as we graduated from Narek Armenian School on Aug. 27, feeling relieved, but also saddened that after eight years of waking up early on Saturday mornings, sitting through three hours of class at Armenian school, and staying up late Friday nights cramming to finish our Armenian homework for the next day, we were finally graduating and would not be returning to the school.

Our graduating class, ranging in age from 13 to 16, realized at the end of our journey that our struggles were worth the knowledge we gained. Freshman Monica Nazarian said that she is proud of graduating from Narek Armenian School. “We created meaningful relationships with people who we would not have otherwise known, studied our native language and learned about our history, and most importantly, understood the importance of keeping our culture alive while growing up in a foreign country away from our homeland,” Nazarian said.

Our graduation ceremony was not typical of one usually seen in the U.S. Narek displayed its dedication to making the school a “Little Armenia” by following Armenian tradition of having a concert featuring the graduating class singing, dancing, and speaking about the culture and history.

After countless rehearsals that took up most of our time after school and on the weekends for several months, we were finally ready to perform in front of our family and friends. “Although going to all of the practices was tiring and left us with little time to do homework or study for our regular schoolwork from Clark, the end result was so amazing that it made up for it,” said junior Mariam Panikyan, one of the ten Clarkies graduating with me.

Sophomore Shant Martirossyan said that he is more than relieved that the practices are over with. “It was hard to keep up with both sets of homework and studies while also attending regular practices for our graduation two, three, or sometimes even four times a week,” Martirossyan said. “However, now that it is over, I can look back on it as a huge accomplishment that I was finally able to achieve.”

The ceremony was composed of singing, dancing and a brief overview of the important moments of Armenian history: how Armenians came to be and stretched all the way until present-day times and what it means to be an Armenian today. Freshman Rima Mnatsakanyan, another one of the graduates, said “I’m glad that our graduation wasn’t just a ceremony where they gave out diplomas and dismissed us. The whole thing was like a review of what we had learned for all those years of school, and it felt good to be able to say that I was already familiar with everything that we were talking about.”

Besides talking about the past of our country, we sang about 15 songs we had learned and performed cultural dances. While nearly all graduates seemed to enjoy singing, not everyone in the class wanted to participate in the dancing, so only a couple of students performed the dances.

As I had gone to dance for most of my life, not, however, at an Armenian dance place, I was one of the dancers. This new style of dance was interesting for me and I loved learning it. Sophomore Lilit Martirossyan shared a similar experience. She had also only ever danced Latin dances at her dance studio, so the Armenian was new to her as well. “I’m more used to the Latin style and dancing with a partner, but this was something cool to try and I’m glad I was able to be a part of it,” Martirossyan said.

Many of the students graduating began to get sentimental towards the end of the performance. During the last song, everyone began hugging each other and realizing how much they would miss each other and the school. Sophomore Gor Mirzakhanyan was proud of his performance, but was sad that it signified the end of his time at Narek. “It felt really good to be standing in front of my family and showing off everything I had learned from attending this school for so long,” said Mirzakhanyan. “It was my chance to prove how much I knew about my culture and history, and also show how much I would miss the school, my friends, and especially our wonderful teacher, Taguhi Barseghyan.”

Narek Cultural Foundation is not the only local organization that seeks to educate its children in their language, culture and history. The Glendale Korean School shares similar goals for their students. This school is open to Korean youth from Glendale, La Crescenta, La Canada, Burbank, Sunland, Tujunga and Pasadena and takes place on the Clark campus every Saturday morning.

The Glendale Korean School is part of a bigger organization, the Korean Institute of Southern California, which consists of twelve chapters. The Glendale Chapter was established on September 3, 1983, with their motto being “Let us become polite and honest Koreans in America.” With approximately ten teachers and ten assistant teachers, the school strives to make the next generation of Korean students aware of their culture, history and their language, according to the Korean Institute of Southern California.

Narek Cultural Foundation also hopes to provide a high-quality education to Armenian students. It is an Armenian School as well as a daycare center for children in Los Angeles County.

Their goal is to educate kids that come from an Armenian background and create a close-knit community of people that continue to help and support each other throughout the rest of their lives. This has been the school’s intention since September, 1989, when the school opened. Rima Sarian, the founder of the school, has been a devoted principal since the beginning.

The Armenian school started out with four students, and now about 400 students attend the school. The curriculum is designed for eight years, after which the students who graduate are given a diploma and are no longer regarded as children attending an Armenian school, but as Narek Alumni.

During our last two years at Narek, our principal began to visit our class more frequently. Her most important lesson and piece of advice to us on our last day of school was, “Whenever you can, speak Armenian. Use your native language so you will not forget it.” We have heard this sentence from her for as long as we can remember, and we were all slightly saddened that this was the last time we would be hearing it coming from her. “Although we are used to talking English more, Sarian is right, and I hope that we never lose our identity as an Armenian or the ability to speak in our native tongue,” said sophomore Razmik Alemsharyan.

For some of the graduates, including me, the school has been a fixed part of our lives due to the fact that we not only attended the Armenian School, but also the preschool when we were younger. “I have been going to Narek since I was tiny, probably two or three years old, so that is where I grew up,” said freshman Christina Khnkoyan.“I have been influenced by all of the teachers there, and my life would have been very different if I had not attended Narek.”

Our teacher for the past two years, Taguhi Barseghyan, said that this was her first time being the teacher of a graduating class. “I was so proud of my students,” Barseghyan said. “Their performance was amazing, and their hard work and preparation for it clearly showed. I do not want to teach any other graduating classes in the future because I want this class to be both my first and my last.”