Hollyweird: Taking a tour of the colorful city

Spiderman, Katy Perry and Pete show what the city is really about 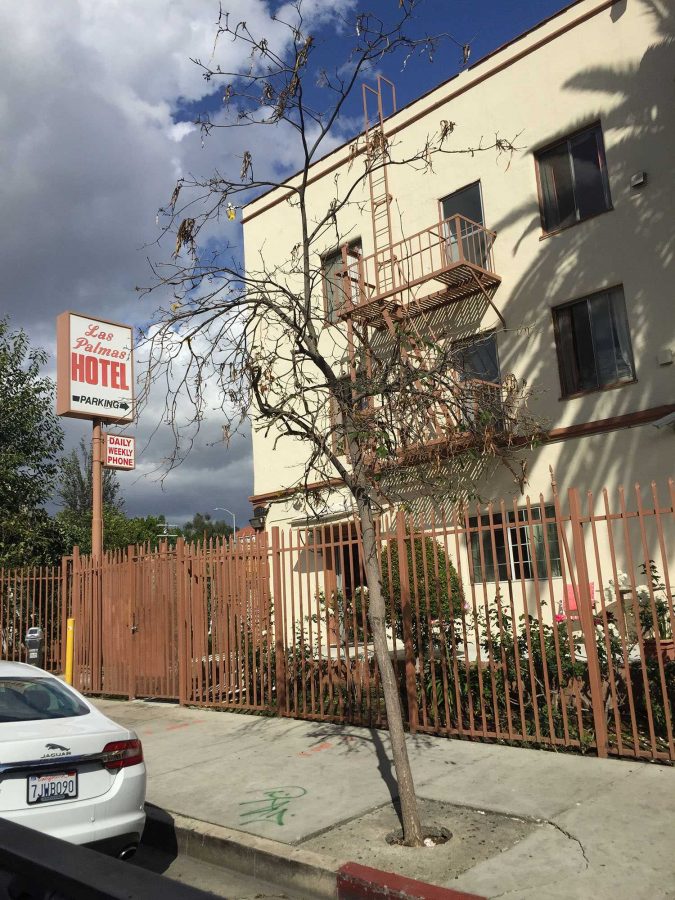 In every major city, like New York or Hollywood, there are people who wear really cheap costumes of Spiderman or Catwoman or any other fictional character and stand around to take pictures with people for money. According to Pete, our tour guide on the Hollywood bus tour, these are usually people who have just gotten out of jail.

During the two-hour Hollywood bus tour that I did recently, Pete recalled an incident on the Walk of Fame when Batman and Spiderman got in a fight but neither pressed charges against the other because they had both recently gotten out of jail and were paying child support. This is just one of the many things I learned about Hollywood during the tour around the infamous city.

After 13 years of living in the Los Angeles area, I decided to take a Starline bus tour, a sightseeing company with a history dating back to 1935. The company has a varied selection of excursions and guided tours that take tourists and residents alike around LA. The company offers tours of Los Angeles, specifically tours of movie stars’ homes and movie locations.

I took the celebrity home tour, where Pete, our guide, drove us around Hollywood and Beverly Hills and showed the locations of where many celebrities live as well as some classic places in the area. After booking the tour at a booth on the Hollywood Walk of Fame, Hoover High senior Mane Vahanian and I went to Sweet! Hollywood where we waited for fellow tour takers until we could take off.

After everyone arrived, we walked to a parking lot for the buses near the Dolby Theater. The bus, which was more like a van without the top, had 14 seats, three rows of three seats, one passenger seat and one row of four seats in the back. Vahanian and I sat with another pair of friends in the back while everyone else sat wherever they could fit. Pete introduced himself and handed all of us a pair of Starline earphones, which we plugged into a box set in the seats in front of us in order to hear Pete as he spoke through a headset. After handing out the earphones, he gave us all blankets and we were off.

We passed by the Dolby Theater first. Pete told us that this is where they always hold the Academy Awards and that it was previously called the Kodak Theater until 2012, when the owner became bankrupt. At this point we were at a red light, and this is when Pete told us the story about the characters on the street. In the next lane, there was another tour bus from a different company, and as Pete told us about how they’re all usually from prison, we saw a man in a really lousy Spiderman costume yell profane words at a few tourists from that particular bus.

After a good start, we made a left at the light,on a street called Las Palmas. “Not the most interesting part of LA,” Pete said. “Just this little old hotel called The Las Palmas where they shot a little movie known as Pretty Woman.” It was at this moment when the girl sitting next to me squealed and declared her love for the movie. I told her that I loved the movie as well and we became acquainted. Her name was Jenny Scott and she and her friend Allison Morgan were visiting from their hometown in North Carolina. “We took a year off from college,” Scott said. “We both always talked about coming to LA and so we finally did it.”

After Las Palmas, we started heading towards Mulholland Drive which, according to Pete, is the long street that separates the Los Angeles county between its two main parts: Los Angeles basin and the San Fernando Valley. As we moved through the mountainous pathway overlooking the valley, Pete told us that California is an earthquake state, something that Scott and Morgan thought was equally terrifying as it was fascinating. Pete mentioned this because we began passing large mansions at the foot of high mountains that were standing solely on stilts.

The first celebrity home that we drove by was Jason Statham’s, who, according to Pete, had just bought it with his young wife. After Statham’s home, we drove further into the beautiful and expensive scenery and stopped by one large mansion. “The young pop star who bought this house at about $6.5 million values her privacy so much that she bought the house next door so that no one would peep into her property,” Pete said. This young popstar turned out to be none other than Katy Perry. Marcus Newman, a man from Chicago on break with his friend who happened to be sitting in front of us, thought that that was crazy. He joked, “I barely had money for this trip let alone enough to buy two houses.” Newman owns a bodyshop in Chicago and decided to take his first vacation in two years with his friend Jason to Hollywood which, after three days of exploring, they referred to as “Hollyweird.”

As we passed by more houses we ended up at the front gates of Justin Timberlake’s home. As we were driving towards the front gates we noticed a flash from a camera hidden in the trees. Pete told us that the Starline tour company has been operating for a long time and that when he first started 17 years ago, there were only about two tour companies in Hollywood. Today, there are about 32 companies, most of whom buy cheap vans, cut them in half and give uninformed tours. According to Pete, these disrespectful operators take passengers to celebrities’ homes and behave rudely; they constantly knock on the doors, ring the doorbells and use bullhorns to shout the celebrities’ names. He said that the flash was from a camera installed by Justin Timberlake’s security because they are trying to create a case to make the city build a gate that blocks tour buses from entering that particular area. At the front gates, we saw a guard blatantly take photos of us. “Smile,” Pete said, “maybe Justin Timberlake will see you later.”

We drove on. Pete asked everyone where they were from. There were a couple girls from the Bronx, a newlywed couple honeymooning from Australia, Marcus and Jason from Chicago, Allison and Jenny from North Carolina, all these places that fascinated the other passengers until it was our turn. I muttered “Glendale.” Pete asked me to speak up and I said it again, louder. Everyone turned around and looked at us. Pete laughed and informed the bus that we’re just around the Hollywood sign. Surprisingly, he said, he gets a lot of locals. Senior Ani Hovasapyan told me that she has taken a bus tour multiple times. “It’s always something to do when I visit Hollywood with friends or family,” Hovasapyan said. “It’s interesting because we always see something weird and different.”

Pete showed us the Chateau Marmont, the luxury hotel on Sunset Boulevard where stars stay which also happens to be the hotel next to James Franco and Jason Segel’s homes. We drove by the House of Blues, which has unfortunately gone bankrupt. It was our last stop before Beverly Hills.

Pete informed us that in Beverly Hills there are no fast food restaurants. He mentioned that the residents save that money and spend it on gardening, the thing that Beverly Hills residents spend money on the most. We drove through Rodeo Drive, where people make appointments to shop. We passed by a gas station where the attendants filled the car and cleaned it while the driver remained inside.

We ended the tour back at the Dolby Theater. Taking a look at Los Angeles through the eyes of what people from other cities see it as made it feel like a movie, a really cheesy movie with random actors but beautiful scenery.