Going for the gold

I try my hand at a taekwondo competition 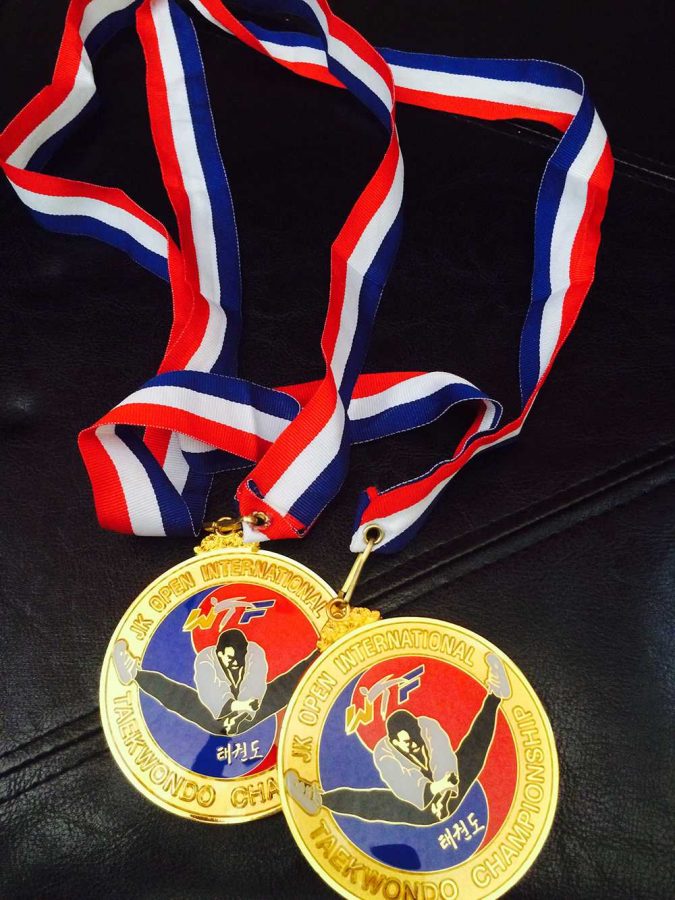 The two gold medals I won, thanks to all my hard work, determination, and perseverance.

“Oh my God, I’m never going to do this. Mom, promise me you’ll never make me do this,” I said as I watched my little brother kick a target in ways that I didn’t know were possible, in the summer of 2014. I’m not known in my family for being athletic whatsoever. I think I’m the only one who’s never taken up a sport, honestly.

Fast forward to six months later: I started taekwondo in the middle of sophomore year, which wasn’t exactly the best idea, as I had to use my after-school nap time to take classes. But I’ll be real here, practicing taekwondo makes me feel like Wendy Wu: Homecoming Warrior. So I guess it’s okay that I lose sleep — sometimes.

Taekwondo was created in Korea and popularized after the end of World War II; it is now one of the world’s most popular martial arts and is considered an Olympic sport (in its full-contact sparring aspect). This particular martial art focuses on striking, especially through kicking. It  channels both one’s physical and mental capabilities, and pushes them to their limits. It’s a martial art you have to wholly invest yourself in.

I take the adult classes at JK Taekwondo in Glendale. The class lasts for an hour, from 7:45 to 8:45 p.m., and it is crazy. I’m allergic to my own sweat — I’m being serious here — and every night I’d be covered in it. It still happens, and surprisingly enough, I’ve grown used to it. Coming from someone who detests any physical activity, I’ve learned to enjoy exercise.

As many as 70 million people in 188 countries practice taekwondo today and four million of those students are black belts. For every 10 thousand enrolled in any martial arts school, half will quit within their first six months, according to Martial Views. Of the remaining 5,000, about 1,000 will finish a year of training before quitting. Five hundred will continue for another year after that, but only 100 will reach three years of training. On average, only 10 will get their first degree black belt, and one or two of those ten will get their second degree belt.

However, one of my friends, Bernice Doronila, just happens to be a second degree black belt herself. “I started taekwondo in August 2011, I was nine and in the 4th grade. I really like taekwondo, but I don’t like competing as much. I have a love-hate relationship with it. I love competing in forms — my favorite category —  and winning gold, but I hate sparring and not getting first place. I’ve been to, like, six to eight competitions; the farthest I’ve ever traveled to go to one was somewhere seven hours away,” Doronila says.

Training was (and still is) pretty intense — I’d go to school unable to walk up the stairs or sit down. I’d be sore for days. My ankles are so fragile now, which sucks. I have to give myself a break every now and then, though, especially since I trained every day over the summer. There’s a lot of cardio, strength and flexibility training involved. I mean, where else are you going to do pushups while in a split?

Competition season is an even bigger pain. There are two possible events you can compete in: poomsae, or forms — a “systematic, prearranged sequence of martial techniques that is performed either with or without the use of a weapon,” according to Wikipedia — and gyeorugi, or sparring, which is full-contact, points-based, and competed in the Olympics. To prepare for competition, you have to practice even harder than normal.

I’m not the only one who competes. Clark alum Romen Shahijanyan has been doing taekwondo since he was a junior, and is now a part-time instructor. “I love to compete —  I like the thrill of it,” says Shahijanyan. “The best part of competing is not the medal or the trophy, but gaining experience. The worst part has to be if you get hurt while doing it, especially in sparring, which happens to be my favorite. I’ve competed four or five times and I’ve even ended up in Las Vegas for one of them.”

My studio decided to hold a tournament on Oct.10, so I decided to take advantage of that and compete in both categories that were offered during the in-house tournament. (Taekwondo tournaments are notorious for being far away.) This was a big risk on my part for two reasons: (1) I hadn’t trained in almost a month due to being incredibly sick, and (2) I’m terrible at sparring. But I knew I could do it, deep down.

I began preparing two weeks before the tournament. I took class when I could — when my homework allowed enough time for me to go, at least. Prior to that, the last time I had taken class was two months before. I had a new form to learn that I’d have to compete with and only two weeks to master it. I was pressured, but determined to make a comeback.

Tournaments can really stress you out. In June, I competed in a tournament in Pasadena, and I ended up placing third, even though I knew the form I was competing with perfectly. I got nervous, and I made stupid mistakes. This screw-up on my part motivated me to do better this time. I wasn’t going to be content with a bronze medal — I was going for the gold.

On the day of the tournament, I didn’t even want to get out of bed. When I got to the studio, they were behind schedule. I had to wait even longer to compete, which only made me even more nervous. Other kids were practicing their forms in the holding area, while I just concentrating on not passing out.

Finally my time came to compete, after what seemed like an eon. I could feel the adrenaline pumping through my veins, which only made me steel myself to keep from shaking. I was so focused on not messing up this time, that my shoulders were square and my hands trembled. But I was able to do it well enough to get me first place.

I had to spar after that, but as my division was coming last, I had to wait another hour to compete. I was forced to spar a guy, instead of the girl they had originally paired me up with. It turned out that she had backed out of the match because she was scared to fight, but that forced me to spar someone who wasn’t in my division.

I hate sparring guys, for the record. They’re all taller than me, but everyone’s taller than me anyways. Nevertheless, I didn’t back out like my former opponent did, and I won 15–8, earning me my second and final gold medal of the day.

Another competitor, Marcela Jacobs, shares my uneasiness for competitions. “I kinda hate [competing],” Jacobs says. “It makes me nervous. Weeks of practice go into a minute that can make or break you. That minute counts. But the gold medal at the end makes it all worth it.”