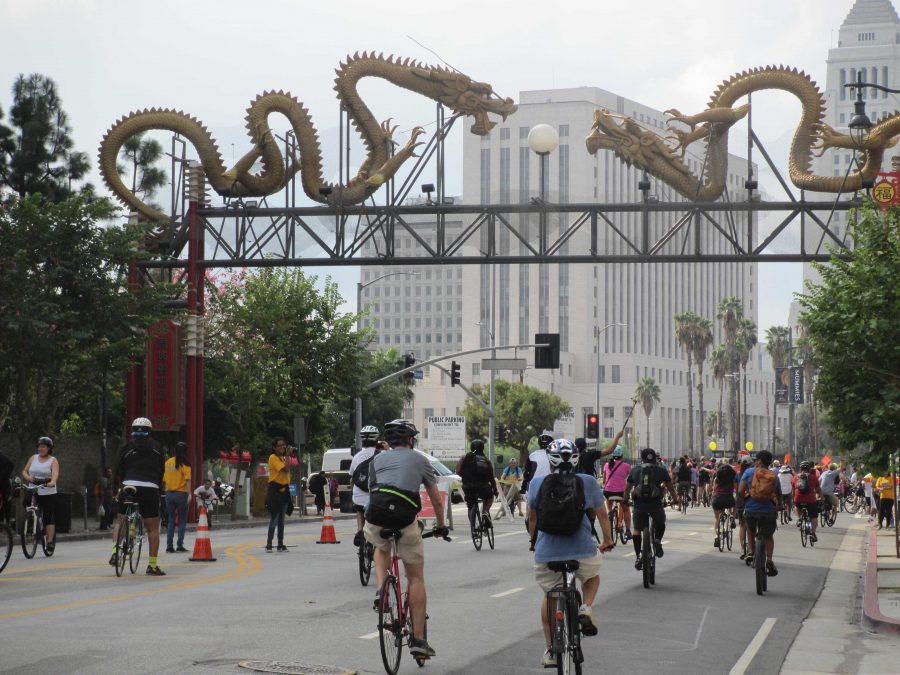 I started the ride in Chinatown.

I arrived at CicLAvia once the rain had stopped. The fierce weather had awoken me hours earlier, and I was worried that I would be biking in the precipitation. Fortunately, my perturbations were for nothing. The streets of Chinatown were dry as a bone when I arrived. I mounted my bike and put on my helmet, then proceeded onto the crowded and sunlit road where I joined about three dozen other cyclists, all here for CicLAvia.

Bikers in Los Angeles are united during CicLAvia, a large event held several times a year where people bring their bicycles and ride through certain streets. I took part in the annual Heart of LA ride on Oct. 18. The way it works is that certain streets are meant for bikers, skaters and pedestrians only. Cars are blocked from going across these streets, which is unique in that Los Angeles is usually filled with cars. However, there are certain intersections that cars can pass through. These intersections require volunteers to stop the traffic. But volunteer opportunities at CicLAvia aren’t just as crossing guards. Many people pass out water and help in the entertainment and food truck areas.

CicLAvia began in 2010, inspired by ciclovía. Ciclovia is a similar event in Colombia which started 40 years prior. Since 2010, Los Angeles has hosted 14 CicLAvias, and more than one million people have explored more than 100 miles of streets in Los Angeles County, according to the official CicLAvia website.

At all four hubs on the map, which are located in the middle of the course and at each of the three end points, there are spots where you have to dismount your bike and join the mass of cyclists in what is supposed to be a rest stop, but with a lot of food and even some performers. As far as entertainment goes, I witnessed a man on a tall unicycle who was riding around in a circle, surrounded by a few dozen spectators. He was juggling bowling pins while talking to the audience, which to me is more levels of multitasking than I can even comprehend. At another hub, I listened to a woman sing some ‘90s hits while accompanied by a band. If you plan on spending the entire day at CicLAvia, or even a few hours there, the rest hubs are a great place to grab a bite to eat and be entertained.

The whole ride from start to finish was six miles and took me about three hours, due to the leisurely pace that everyone seems to take. It’s not as if anyone could ride faster, though, because so many people attended that the streets were heavily congested. While some people might enjoy biking slowly, others prefer to go faster, which is why CicLAvia isn’t for everyone.

English teacher Carol Pettegrew is an avid mountain biker and is also in charge of the Clark Magnet Bike Club. Despite her love of cycling, she did not enjoy CicLAvia when she attended at the beginning of 2015. “Too many people. I didn’t enjoy it,” Pettegrew said. “It was fun, but I like to ride fast and to not be hindered by so many people.”

I agree that the event was crowded, but although I was forced to ride very slowly, I still enjoyed the experience. Pettegrew said that she would only do a bike ride like CicLAvia if it were more local and not as crowded. When I asked if Clark Magnet’s Bike Club would be interested in CicLAvia, most, if not all, of the students did not know what it is. That surprised me, but the club mostly focuses on mountain biking anyway.

Pettegrew’s opinion is not applicable to everyone’s experience, of course. Government teacher Nicholas Doom showed up at CicLAvia for the Aug. 9 event this year. “It was great,” Doom said. “I definitely recommend it.” He rode from Glendale through Pasadena, into the Eagle Rock area.

While I made my way through 7th Street on that Sunday afternoon, I noticed how surreal it was to get to ride in the middle of a street usually congested with cars. As I pedaled, I heard a loud thud, followed by a groan and some people wincing a few yards behind me. Someone had lost their balance and fallen off their bike, audibly colliding with a trash can. Over the last few years, I’ve taken part in three or four CicLAvias, and every time I’ve witnessed at least one accident. At least this guy was wearing a helmet. I can’t say that for a large percentage of attendees, though. When I started the ride, one of the first things I noticed as I got on the street was that from the group of people around me, only about four or five out of every ten wore a helmet. CicLAvia requires everyone under 18 to wear a helmet, but you can do whatever you want if you’re above this age limit.

There were some parts of CicLAvia around the East LA area that were a bit hilly. I noticed that some people had a hard time pedalling uphill, but the view at the top was worth it. At the top was one of many bridges that span the LA River. I pulled off to the side and looked over the edge to see the sprawling body of water. Behind me was the downtown area, where I had been an hour earlier. This was the first time during the entire ride that I had realized what I had accomplished; I had traveled through the city, from one end to the next.

When everyone around you has some type of manual transportation with wheels, you’ll start to notice the attention-seekers, and in Los Angeles, there are many of them. At CicLAvia, this is anyone who isn’t on a standard bicycle or skateboard. For example, I saw someone in the opposing lane who sped past me on a unicycle. He seemed to know how to ride it effortlessly, too. I also saw a few people on those tall bikes. One of them stopped at an intersection, and I pulled up behind him, curious to see how he would mount the bike without losing his balance. Once the cars had finished passing, the man put one leg high in the air, resting it on the left pedal. In one rapid and agile motion, he swung his right leg over the seat and back onto the right pedal. To better paint the picture, the man was under six feet tall and his bike was about seven feet tall. The way in which he swung up and mounted the bike in just a second or two without losing his balance was fascinating. I even saw a tandem bike or two. Another unique sight at CicLAvia are those people who have their little dogs in baskets by the handlebars. I witnessed one person who had a carriage attached behind her bike with a dog inside it. 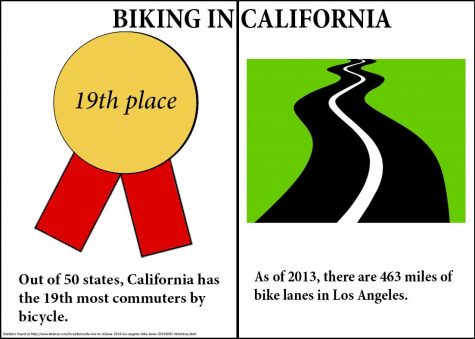 Lucas Rosen
My friend Cole Tatham attended a couple years ago, before he moved to Japan. “CicLAvia presents an interesting opportunity for cyclists to take over the traditionally car-dominated streets of Los Angeles,” he said in an email interview. “It’s a boon for local business as thousands of new customers converge on their neighborhoods.” As an American for the first 16 years of his life, Tatham notices how predominant bicycles are in Japan. “[Cycling] is largely reserved for recreation and exercise in the U.S.,” said Tatham. “Everyone bikes here [in Japan], from suburban moms to suit-clad businessmen.”

This is because bicycles are an efficient and easy way of transportation in countries outside of the United States. Since cars are more common in America, bikers are rare in large cities like LA. Therefore, CicLAvia is one of the only events in our city in which bicycles are more common than cars.

I enjoyed CicLAvia and plan on participating again in the future. There’s something special in expressing your enjoyment of biking with thousands of other people who live in the same city as you.