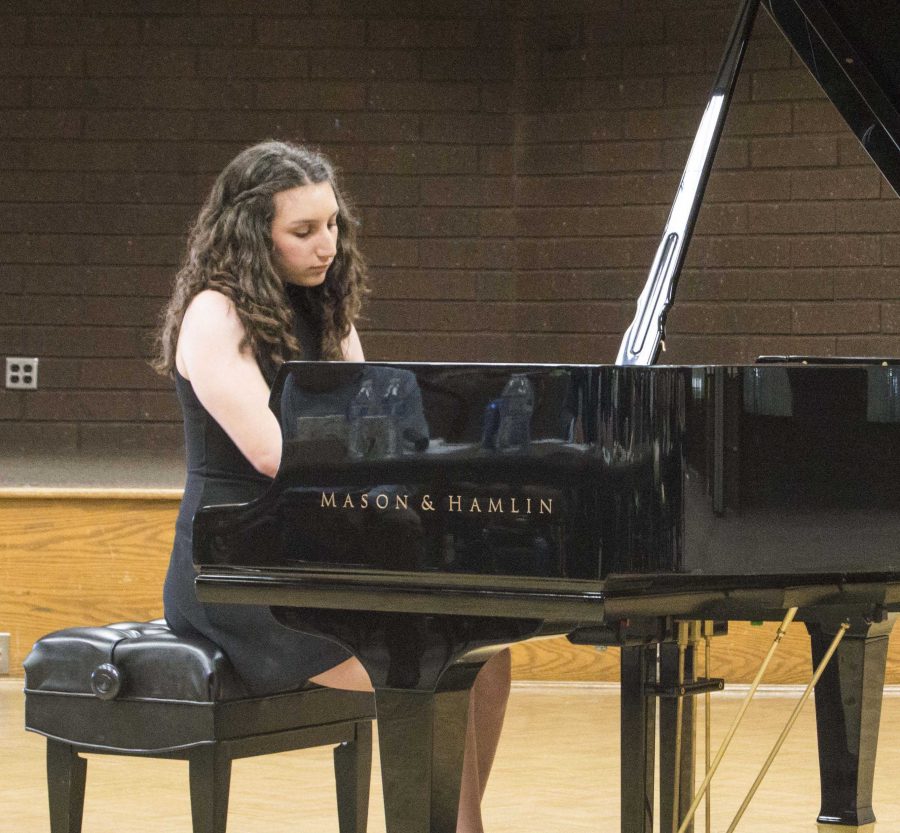 My heart was pounding inside my chest. The palms of my hands were drenched in sweat. The audience was dead silent. I slowly placed my hands on the ivory keys of the piano, and I began to play.

I had never understood when people used the expression, “butterflies in my stomach,” until this day. When I woke up in the morning at 10 a.m, however, I didn’t feel too nervous about my piano competition. I had never been one to have stage fright or be scared about performing in front of an audience.

Sophomore Erika Hookasian, however, was very nervous before a similar piano competition last year, the Southwestern Youth Music Festival. “Before the competition, I had to distract myself from all of the nerves so I started listening to feel-good music,” Hookasian said. “If I can give advice to other people, it would be to not worry about missing any notes. Just convey your feelings through the song.” I now know this is good advice, but before my competition, I wouldn’t have listened to Hookasian because I thought playing perfectly was a major part of the judging process.

Throughout the morning and during the half-hour car ride to Arcadia where the Los Angeles Young Pianist Competition would take place, I was feeling normal and wasn’t too worried. I knew I would be competing against some very experienced pianists, but I had practiced my pieces and was confident. I later found out that I wasn’t the only one who crammed a lot of practicing into the past few days. “I probably practiced for two hours every day for the past week,” said twelve-year-old participant Maddy Fukuda.

Although I wasn’t nervous about actually playing the piano, I was worried that we would not arrive on time. My two sisters and I were planning to leave the house at 11 a.m, but we ended up leaving at 11:20 a.m. We went to pick up our grandmother from her house since she isn’t able to drive, and then we were on our way.

Around noon, we arrived at the Arcadia Community Center. When I entered the big, brown, old-looking building, I could hear students practicing on the Mason and Hamlin piano before the judges came in. I went to the desk set up at the entrance, and I checked in. Staff members then directed me to the auditorium where I would be performing and told me I could practice my pieces for a few minutes when the others were done.

I waited impatiently for my turn to practice. I could see students wiping their hands on their clothes, and others blowing into their palms to warm up their freezing hands. After a few minutes of waiting, there was an opening to play the piano, and I was able to practice my pieces. The piano was one of the best ones that I have ever practiced on. It was a completely different experience from practicing at home on my own piano. The sound of the piano at the competition was more clear and less harsh. The piano keys were also more smooth than my own.

The competition began with a professional tuning the piano for about 20 minutes. When he was done, Rosa Zee, the president of the organization, gave a speech and also introduced the three judges: Dmitry Rachmanov, Lee Galloway and Tianshu Wang. She mentioned their achievements and accomplishments and wished us all luck.

There were supposed to be 21 performers. Before we began, the judges notified us that they would be stopping us halfway through playing the song because the song was too long for them to listen to all 21 competitors. One of the board members then announced the first person that would be playing, and we began.

For the competition, I needed to learn one required piece that everyone would play during round one. The judges would then pick five people to continue to the second round where they would be able to play their own choice of music. The mandatory piece was “Allegro – The First Movement from Sonata in G major, K.189 h (283)” by W. A. Mozart. The second piece that I chose to play was “Two Gossiping Old Women” by Aram Khachaturian. I learned how to play this piece two years ago, and it has been my favorite piece to play ever since then. My piano teacher thought that this would be the perfect piece for me to play if I made it to the second round since I have been playing it for a long time, and because I play it with much emotion.

At the competition, I was supposed to be the ninth person playing the piano. However, the person before me, number eight, did not show up, so when they called my name, it was an unexpected surprise. I stood up, and made my way forward. As I took the first step from my seat towards the piano, nervousness began to flood my body. With each step I took, the competition became more real, and I became more nervous. I reached the piano all too soon, and before I knew it, I was positioning my hands on the piano, and my right foot on the pedal.

The moment my fingers touched the piano keys, all of the nervousness I was feeling less than 30 seconds prior suddenly left my body. I did what I knew best; I let all of my worries float away with each note I played. I forgot about the audience and the judges and played only for myself. All was going well, until the unfamiliarity of the piano began to bother me. I was not used to the heaviness of the piano, and definitely not the amount of force needed to play loud chords. Towards the end of the piece, the unfamiliarity finally got to me, and I made a mistake. I tried my best to go on and finish strong, and indeed I did, but I had already made one error and was sure that would ruin my chances of winning the competition.

Many of the other pianists at the competition agreed that they were all very nervous. However, in the end, all of the practice, time and effort put into the competition was worth it. “I was a little nervous, but when I got on the stage, I was pretty excited,” said finalist Rachael Lee. Fukuda agreed with Lee, saying, “It’s pretty nerve wracking, and you get anxious waiting for your turn, but I think it’s a good experience.” There were also many pianists who were not worried about the judges scoring them, but rather about the audience judging them. Second place winner Ryan Wisniewski said that he was most nervous about how people would react if he messed up, yet he played stunningly. Musicians all have different worries when performing.

Although it was not a competition, sophomore Osheen Manukyan was worried about not being good enough when he performed at the International Festival of Young Musicians in Armenia. He was only 13 years old at the time, and he said that all of the performers played like musical prodigies. “I was scared for every minute until I walked on stage,” Manukyan said. “When I started playing, I didn’t even think about it anymore, and I played great.”

Along with the students’ performances, the organization was also an impressive one. The Los Angeles Young Pianist Competition is a nonprofit organization. None of the board members or other workers are paid for the countless hours they contribute to guarantee the competition will be a success. This year was the 32nd year of the competition. Organization president Rosa Zee was proud of everyone’s efforts. “The parents and students who attend these competitions greatly appreciate the board members who have made this competition possible for so long,” Zee said.