Would you be willing to take on a challenge? Become an investigator for an hour to find out if your abilities will be enough to successfully complete the quest 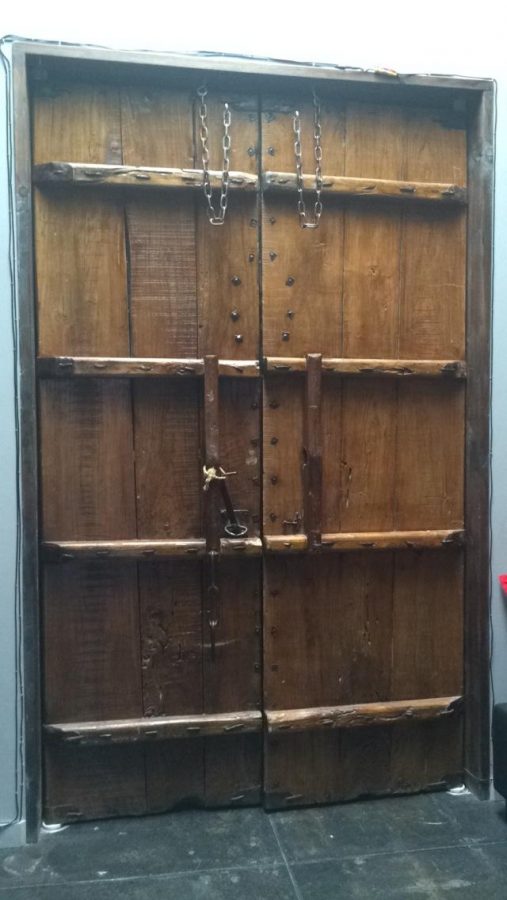 Opening to the Castle Room.

As I entered the FBI Maze Room located in Los Angeles on Sept. 5, I didn’t know what to expect. I had the exact same image any other teenager would have in mind before walking in, but it didn’t seem to be very accurate. The maze room consisted of two rooms, along with a prison cell. One of the rooms looked just like an office, while the other was similar to an office a boss would work in. There were many props that made the rooms unique, such as a coffee machine and a board that dropped from the wall when the correct code was entered.

There are six different rooms located in distinct areas in Los Angeles, with four more coming soon. Our group of four chose the most challenging room, the FBI room.

The FBI room is based on a fictional scenario about an FBI agent who investigates multiple crimes committed by a serial killer and suddenly disappears. As a team, our job was to get into the headquarters office and find out why the FBI agent disappeared without further notice. So, we had an hour to find the evidence that would fully uncover the reason behind the suspicious disappearance of the agent.

I felt more comfortable as Anastasia, the controller of the game, welcomed our group into the lounging area. After signing a legal release document, everyone waited as Anastasia introduced herself and told us how the game works.

According to Anastasia, the purpose of this particular room was to find evidence in order to unlock the door and get out of the room within an hour. If you failed to do so, you wouldn’t get the opportunity to find out what the rest of the hints and clues led to. On the bright side, you receive a walkie talkie and three hints if you get stuck. Even if you don’t get through all of the clues because your time runs out, the doors will open anyway so we had nothing to fear because we knew that we wouldn’t get stuck there eternally.

“Maybe we should split up in the beginning,” said Lilit Akopyan, a 21-year-old participant in our group. “We can find the clues individually and then let one another know once we have multiple clues.”

“No! It’ll be hard enough to find clues as a group, which means it’ll be even more difficult to do it individually,” said Sevana Simonyan, a 20-year-old participant in our group. “We need to stick together and make logical decisions, so we don’t waste time.”

We started off by looking through drawers, book shelves and even trash cans. As we got the hang of how things worked, we found many more keys and codes. It was pretty difficult because there was an unknown number of clues, and we had no idea how many clues we were missing.

“Did you guys write down how many clues we found so far?” asked Narek Akopyan, a 25-year-old participant.

“No, no one told us to write them down,” Lilit Akopyan said.

“Great! Since you guys didn’t keep track of the clues and keys, we have to go back and figure out what clues lead to the next room,” said Narek Akopyan. “This is going to be a waste of time considering the fact that we have a limited amount of time.”

Each clue led to the next step, so it helped to look through everything very carefully, eventually leading  to the end of the quest. By the time we found the keys, in order to unlock the door, we were exhausted, but extremely thrilled.

“It was definitely challenging as a first timer to work together and find the way out, but overall, I had a great time,” Simonyan said. Anastasia warned us about this room being the most difficult one out of all them before entering, but we decided to take on the challenge, considering the fact that our group consisted of five members. “If it wasn’t for Anastasia’s’ clues, we would’ve still been stuck there,” said Lilit Akopyan.

After giving us many clues and helping us through the quest, Anastasia decided to tell us that there is a 25 percent chance of success in this room. She said that many groups who tried all five rooms failed to complete the sixth quest because of the level of intensity and difficulty. It was appalling to hear that this quest was made to be impossible to take on, so we were impressed with our communication and investigation skills as a whole, even though we had over two hours to find our way out.

At times we became frustrated due to being stuck, so we started to sing childish songs such as “The Wheels on the Bus” and “The Lion Sleeps Tonight” in order to break free from all the tension in the room. Anastasia was able to figure this out because there were cameras placed in the rooms, so she had the ability to follow along as we were in the process of completing the quest. Since she knew it was our first time, she constantly wanted to help us because we seemed to be very frustrated and impatient. “I was very excited once we got out of the room because of the constant argumentation, along with the yelling, especially because they were all girls,” said Narek Akopyan.

Maze Rooms were created based on computer games called Escape the Room in 1994, which were very well known. These games were then transformed into a room full of visual props, which included clues and puzzles. These escape games were made to test players’ abilities to interact with one another. It also gave players the opportunity to use senses and logic in a themed room full of high tech equipment. According to Maze Rooms studies, 75 percent of participants successfully escape at least one room, along with an addition 5 percent who return to take on another quest. Overall, Maze Rooms has about 1000 teams who attempt to take on a room every month.

The FBI Maze Room is located on 1182 South La Brea Avenue in Los Angeles and is fairly new. Each game ranges from about $120 to $140 per group, depending on the date and time planned. Most importantly, you need to have a group that consists of a minimum of two participants to a maximum of six. It is also recommended to book the day you feel most comfortable with ahead of time, so you do not run into problems once you arrive to the room.

Maze Rooms is a family-friendly environment, which means anyone from 10 years of age can participate in the search for the disappearance of the agent in this case. You can choose from many different rooms that have individual quests, like the castle, spy safe house, or jungle game room, along with other exotic and realistic rooms. “Each location is different in its own way, which makes everyone eager to move onto the next room,” said Ivan Krasnov, the manager of Maze Rooms.