Karaoke for the first time at Sardo’s 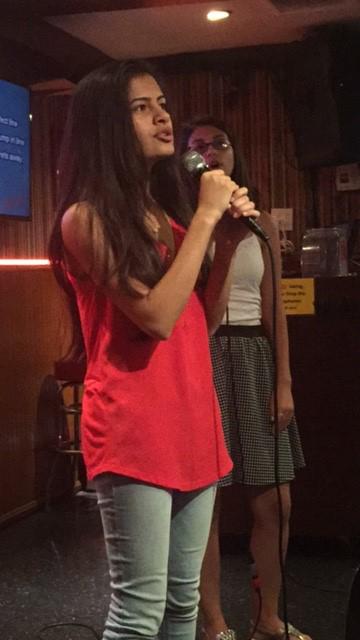 Lily Nazarian and I are singing the chorus to the song “Secrets” by OneRepublic.

I wasn’t scared at all. Okay, maybe a little. Maybe I was a little scared. But that was only when I saw our names on the TV screen. The Sardo’s lounge was packed and everyone’s just sitting there staring at the people singing, could you blame me?

Lily Nazarian, a junior from Clark, and I started our way to the stage with huge nervous smiles across our faces. I took the microphone and instantly felt the eyes of about 70 people on me. However, as soon as our song “Secrets,” by OneRepublic, started — as soon as I heard the melody — I knew that it wasn’t going to be that bad.

Karaoke  was brought to America from Japan in 1984. While it is still unclear how karaoke came to be in Japan, there’s a thesis that a band hadn’t shown up to a gig and the bar owner ended up playing tapes and asking people to sing. The name karaoke comes from the Japanese words kara, which means “empty,” and oke, which means “orchestra.”

I’m the type of person who always has a song in her head. I operate better listening to music. I usually just sing to myself or find myself singing along when a song’s playing, so karaoke is a huge step up. Willing to try something new, I started searching the web for business establishments that are closeby and have karaoke. All the places that came up were either too far away or only for adults.

Eventually I did find a place, Sardo’s, that interested me. Sardo’s is located in Burbank and has family karaoke nights on Fridays. On Sept. 11, I went to Sardo’s with my friends to give karaoke a try.

There was a large wooden door and an entrance lit with dim lighting, making it seem like a very mature environment, one meant only for adults. But as soon as I entered the huge chestnut-colored door, I knew I was wrong about what I had thought. There was at least one child at every table.

Once at our table, we started looking through the song books. While I wished they had more current songs on their lists, I was stumped on which song to pick since there were so many to choose from. Not until I got to the S section of the book and found “Secrets,” by OneRepublic, did I make up my mind. Since it was our first time attempting to sing karaoke, my Nazarian and I decided to sing that song together.

I remember when “Secrets” first came out years ago. I still love the song now, but back then it was my all time favorite. I would listen to that song over and over even after I memorized it. I knew that this would be the best song to sing for me, since I still remembered all the lyrics.

Singing isn’t the only part of the experience, though. “It’s fun to just come and watch the others perform too,” said Evelina Harutyunyan, a junior at Clark and a friend who also accompanied me that Friday night. “It’s great that even these little kids could come up here and really just let loose and have fun.” She said this right after a boy around ten years old went up to sing “Let It Go,” from the Frozen soundtrack. He sang with so much passion and emotion, it showed me what karaoke was all about. It doesn’t matter if you sing well or not nor does it matter how well you know the song. All that matters is that you’re having a great time singing.

The other people who sang ranged in age. A fellow who looked to be in his 50s sang a country song I have never heard before. Another singer was an adorable little girl who was only five years old, as mentioned by her mother, and she sang the best version of “A Whole New World,” from the Aladdin soundtrack.

Teenagers our age were also there having a good time. A boy who looked about 17 sang “Marry Me,” by Train, right before it was our turn to sing.

I wasn’t scared at the idea of singing karaoke in front of people since I knew it didn’t matter how good the performance was. Yet, when the other singer left the stage I got surprisingly nervous. While we were actually singing the song, however, I wasn’t afraid at all. I was having a great time singing along to one of my favorite songs.

When we started off singing I had a feeling we weren’t that loud. It was when I raised my voice that I really enjoyed myself. What also made the experience better was the audience. I heard them cheering us on with applause and providing us just enough attention.

While it was my first time singing karaoke, this wasn’t true for my friends. “I haven’t done karaoke at a karaoke place, but I’ve done it at like birthdays in front of family,” Nazarian said. “This was really different because I was doing it around people I didn’t know. It was less stressful, I guess, cause I would never see those people again.”

“It was really fun,” said Harutyunyan who performed “Beautiful,” by Christina Aguilera. “ I would love to do it again.” Like me, she was also very nervous up until she took the microphone. “It wasn’t as nerve racking once I started singing,” she said. “I love singing and I liked having the experience of singing in front of people.”

Even though we were willing to try this, many people would never do this. “Even if I did have a good voice, I would never be able to use it and perform in front of people,” said Nareh Abramian, a junior at Clark. “I would have a bad case of stage fright.” She said that it would be better singing karaoke in front of people she didn’t know, she would still be unwilling to do so because she’s afraid of messing up.

Even with there being many people not willing to try karaoke out, family karaoke has still been a hit. Simor Satin, Sardo’s manager, said, “There’s been a constant flow of people throughout the years.” He said that this was the only place kids too could come out and sing. 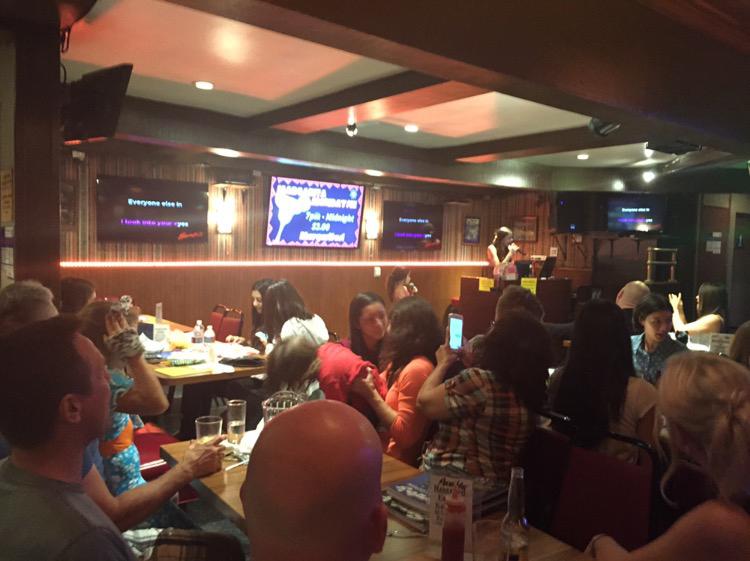 Gallery|3 Photos
Himanshi Ahir
The crowd is having a great time listening to and watching people perform karaoke.
View Comments (1)