Ink doesn’t have to stay on forever

Commitment Problems? Not to worry, henna is here 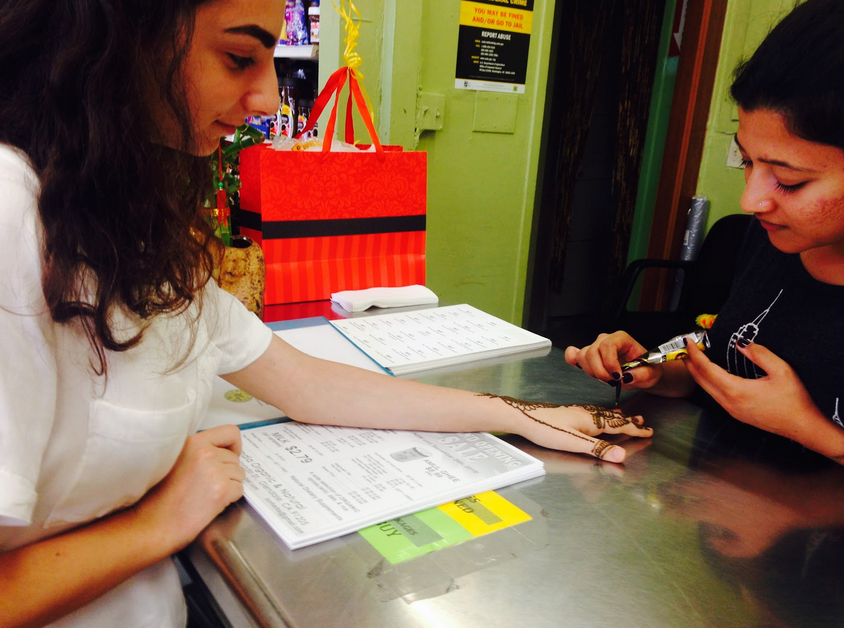 Walking into the newly opened Indian Sweets and Spices in Glendale last week, I had no clear idea of what type of henna design I wanted. As I talked more with the henna artist, Efra, I told her to feel free to design any pattern she wished to do. After all, she has been doing this since she was seven years old.

Henna tattoos are unique because you don’t have to commit to a certain design for the rest of your lifetime.The complete henna tattoo took about ten minutes all together. Of course, the time depends on the intricacy of the design and artist’s ability. Efra cut open the little tube of henna, and started working her magic. “The color of the henna will come out two hours after it dries, and will become super dark the next day,” Efra said. I have to admit, the drying part of the henna tattoo really tested my patience. The texture was so hard and crumbly; I wanted to peel it all off at once. Henna is moist when it is first applied, and once the application is done, you need to make sure to keep apart from anything that might smear the paste. It takes about ten to fifteen minutes to dry, but it is best to leave it on all night so you get the ultimate pigmentation.

Junior Matt Damadian has never gotten a henna, nor does he ever wish to. “I think it’s not for people that are older, like our age. It’s more suitable for younger children.”

As far as the different variety of colors, if you want a henna that’s very dark and pigmented, your artist is most probably going to use henna that has dye in it. Although the black color is beautiful, there are some health concerns regarding the repercussions of the ink coming in contact with your skin. On March 26, 2013, the FDA warned consumers that the extra ingredient in black henna is often coal-hair dye, which contains phenylenediamine This ingredient causes dangerous skin reactions in some people and even once caused a client to make a trip to the emergency room.

There’s also glitter henna, which usually lasts up to one day. Once the time came to remove the excess henna, the color was at first a very bright orange. Efra said that one could mix lemon juice and sugar, and apply it to the henna in order to achieve a darker effect. After one day, the henna darkened a few shades.

It’s also safe to say that you don’t need to be advanced in art or drawing in order to give someone or yourself a decent looking henna.

Henna tattoos can range from a comfortable $10 to a whopping $350. Usually, the more elaborate and complex the design is, the higher the price — especially for bridal weddings. Senior Farah Ali is familiar with the history of henna tattoos because of her Indian heritage. “You will usually see bridal henna mostly in Arabic weddings,” said Ali.

Henna is made from the henna plant, which grows ten to fifteen feet high and contains lawsone, a reddish-orange dye that binds to the keratin in our skin, leaving it safely stained. Olive oil is also used to nourish the skin, as well as lemon juice, tea tree oil, sugar and fresh henna powder.

It’s a no-brainer that Henna tattoos catch the eye’s of others. Twenty-three year old Mariah Indrissi just landed an H&M campaign, and what caught people’s attention was that she wears a hijab, a head covering worn in public by some Muslim women. She started her rise to fame thanks to her role in founding “Salon Marrakesh,” a salon in the English town of Westbourne, south of London. This salon specializes in henna and halal nail polish for Muslim women, who are not allowed to wear polish when they pray. “To finally see a hijabi in mainstream fashion is a big achievement,” she told Fusion, which covers pop culture

The art of Henna has been practiced for over 5000 years in Pakistan, India, Africa and the Middle East. During the henna tattoo, I noticed that the paste gave a very satisfyingly nice cooling effect to my skin — almost as if an air-conditioning was blowing on my hand. I later found out that people from the desert, for centuries, have been using henna to cool their bodies by dipping their hands and feet into the paste. They noticed it left patterns on the skin, which led them to make designs for decorative purposes. “Back in the day, many people couldn’t afford jewelry, so they started using henna as an alternative,” Efra said.

Safety is something people always wonder about when they hear the word henna. “Organic henna is very safe, there is not ink or chemicals in it,” said Efra. Make sure you go to a trusted place before getting the henna done, and always ask for the ingredients beforehand to make sure you are not allergic to anything. There is no such thing as black henna, but a chemical additive may be used and could be harmful to your skin.

Henna also has great medicinal purposes. Since it’s a plant, the henna is considered an herb and has been known to be a great healing substance. It is usually used on top of skin, not ingested because of its potency.

I was extremely surprised by the smell of henna, and didn’t know if I loved it or hated it. I was dumbfounded when I found out that henna was smeared onto a dog’s nose in order to prevent sunburn. In ancient times, henna was applied to open wounds and to one’s forehead to relieve fever. My mom told me that henna is great for curing, or at least healing, athlete’s foot. Yikes.

Depending on how often you shower and wash your hands, the henna should be able to last for up to two weeks. I had seen pictures from Arabic weddings where the bride had beautiful intricate designs on her arms, and talked to Efra some more about it. “The Arabic henna is black, but it’s the hardest to get in the Unites States because of FDA purposes,” Efra said. I was too scared to ask her more regarding that topic, but knowing myself, I did. The FDA has only approved henna for the hair, not skin. Although henna is a natural substance, dermatitis is a health risk.

Henna, believe it or not, is not cultural — it’s a ritual tradition. Henna is usually used for special occasions like birthdays, holidays, parties, births, festivals and weddings. “Mehndi, (which means henna in Hindi) is more cultural and used for special occasions,” Ali said. The most popular is the Mehndi Night, which means the bride and her family gather to celebrate a wedding. The bride gets complex designs on many different parts of her body — her hands, feet, arms and knees. These definitely don’t take just ten minutes, but several hours. It is said that as long as the henna stain shows, the bride does not need to do any housework. The guests at weddings also receive henna, but something rather small and on the back of their hand. Also, the darker the stain appears on the bride, it is said the better the marriage and mother-in-law.

Many people think that henna is a great way to express yourself, without the commitment of getting a tattoo. “I think that henna is a beautiful way of showing art on your body,” said junior Anna Mikaelian, who has never had henna done before, but said she would be interested in getting one someday in the future.The intricate designs can symbolize passages of life, but most people get it for the pure beauty of the tattoo.

Henna tattoos are not just for women and brides. A common stereotype is that most designs, especially hennas, are not something a man would get. Depending on the religion, men or grooms do also get henna.

The earliest day for my appointment was given to me two weeks after I had called. This goes to show that henna is still very commonly used and desired by many people. “Henna tattoos are still being practiced after all these years, and really provide people with a way to express themselves,” Efra said.