Men can be pampered too

Who says spas are only for women? 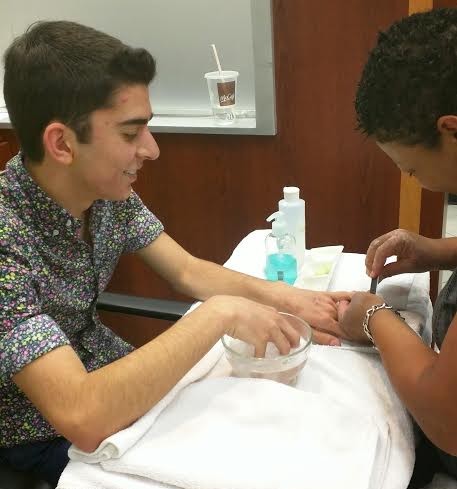 Learning about the concept of manicures as I receive one.

As I sat in a robust leather chair at the 18|8 men’s salon in Pasadena surrounded by dignified men receiving beautification treatments, I was introduced to a whole new world, a world of men who truly care about their looks. The room was filled with the buzz of state-of-the-art razors and the cascading splash of soothing hair baths as everyone indulged themselves with the many treatments that most would not expect men to get.

A common stereotype is that spas, salons or any other place of embellishment are exclusively associated with women. And it is true that when one searches for men’s spas on Google, more results show for women’s spas than men’s. There are some women’s spas that do cater to men upon request, but they’re clearly female-driven establishments nonetheless, as a majority of the advertising seen for these spas consist of women.

As one of the most successful men’s salons in the country, 18|8 is a nationwide establishment that has been grooming men into gentlemen for the past 12 years. The name comes from the method of preventing oxidation to disallow metal to rust, which consists of 18% chromium and 8% nickel. What first started as a barber shop evolved into a full-fledged salon where men can receive nail treatments, facials, shaves and various other beautification remedies.

Up until 20 years ago, male-driven spas or women’s spas that would also cater to men took up a mere 10% of the National U.S. Spa Market according to the International Spa Association (ISPA). As of now, that percentage has risen to a near half margin of 47%. As a result of this upswing, the ISPA recognized men’s salons as an official category of spas.

So as I began my trek to the this 47% margin of luxurious spas, I settled upon getting a haircut, which I was in dire need of at the time, and a manicure for the sake of trying something new. The experience begins by waiting for the appointment to begin in their comfortable lounge, which features lovely couches and delicious cups of coffee. Then, I was escorted to the back room, where I exchanged my shirt for a robe in order to keep my attire clean during the haircut. As I prepared for the treatment, my wonderful stylist for the afternoon, Shawna, began warming up the water for my hair.

Before the haircut, she shampooed and conditioned my hair, ensuring that it was at a proper texture to be trimmed. She then began to use equipment unlike any I had ever seen, including miniature styling combs and razors that were emblematic of feathers. As she cut my hair, she told me a fascinating story about a client she had that told her about a visit he had to a regular spa that primarily served women in which he was given mediocre services and charged unjustly. She told her client that this is why this establishment existed, so that men who wanted to be groomed could come to a salon tailored exclusively for them and be treated fairly and not ripped off by other spas.

Once my hair was cut to my liking, it was washed yet again to remove extraneous hair particles left from the trim. This was followed by a warm towel being wrapped around my entire head, as well as a majority of my face, which was perhaps one of the most soothing aspects of the treatment.

I then returned my robe and got back into my shirt as Shawna prepared the table for my manicure. She laced the table with towels and brought out a bowl filled with warm water that was mixed with an oil-based solvent. Before placing my fingers in said bowl, they were filed so that any rough edges would be removed.

After my fingers were purified of dirt, oils or any other unwanted substances, they, along with my entire arm, were coated in this green, gritty sugar paste as well as a silky lotion to smooth out the roughness of the sugar paste. Once it was all massaged into my skin, my arm was wrapped around in a warm towel just so all the moisture would soak into my pores.

Now that my fingers had been fully cleansed, Shawna used a tool to peel away any of the dry that was left around my nails. As a person with extremely dry, gross fingers, this was much appreciated. Finally, my treatment was finished.

This was a completely new experience for both myself and my friend Mikia Zohrabian, who accompanied me. Though he did not get any treatments, he did observe the various facets of the spa and asked questions of the employees as he himself was a bit interested in the idea of a business such as this, for he as well had never seen a place such as this.

“It’s really cool to see that places like this exist because I’ve literally never seen a salon that’s intended for men,” Zohrabian told me. “I’ve seen spas that’ll serve men as well as women, but I’m pretty sure that places like that will most likely rip off their male clients because the employees will just assume that they won’t know any better, and that kinda sucks. Like, there’s honestly no reason that a man should feel humiliated to do go to a spa just because it’s been widely stereotyped as a ‘female-thing’ which I feel is wrong.”

I’ve seen spas that’ll serve men as well as women, but I’m pretty sure that places like that will most likely rip off their male clients…”

“Not only is this place like a cool idea and something that I think their should be more of, because I assume there are plenty of men out there who have a desire to do something like this, but I personally just don’t think this is for me,” Zohrabian said, which is the way many males reacted when I told them about going here. They thought it was “feminine” and strange for a man to do, but there’s no reason why that should be so.

My cousin Ani Badalian thought that men who make this leap into the world of spas have a certain strength of character that makes them attractive to women. “Men who have the boldness to go to a spa have a certain appeal to them, something that makes them different from others,” she told me. “As a wise 31-year-old woman who knows a lot about men her age, I know that at least 99% of them won’t ever do that.”

I thoroughly enjoyed my experience at 18|8, as it was refreshing both in terms of cleansing my body and trying something new. I had no idea so many men had an interest in going to the spa until I went here. Obviously I had known that there were men’s salons and men who would have some degree of appeal for attending them, but never would I have expected so many people.

There were at least 20 people in the lounge alone waiting for their appointments, and an additional ten or so being treated. The schedule was completely booked for the day as well as for the following day. This goes to show just how much these establishments have become a trend and how little fear men should face when considering going to such a place.