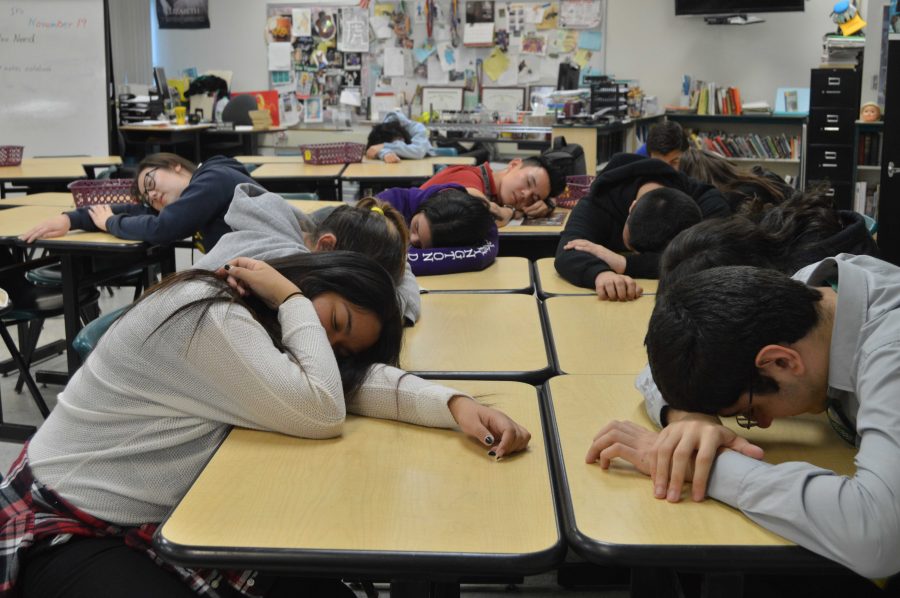 Students falling asleep in class due to an insufficient amount of sleep the night prior.

Students all over the country complain about waking up early five out of the seven days of the week. Students who attend Clark Magnet High School reportedly wake up between 6 and 6:30 a.m. to get ready and make it to the school bus on time, after which, they have a long seven hours ahead of them before boarding the bus once again and heading home.

Insufficient amount of sleep has been a problem for teenagers for a long time. Students who do not get between 8.5 to 9.5 hours of sleep on a regular basis suffer in their academic and social lives. According to the Better Health Channel, lack of sleep can cause depression, the inability to concentrate, moodiness and many other  problems.

One of the impediments towards students’ lack of sleep is the time the schools start. The American Academy of Pediatrics released a study in 2013 which indicated that later start times for schools will positively affect the amount of sleep students get on a regular basis; even 30 minutes can make a difference for a teenager.

It is very difficult for most teens to get sleep as early as 9 or 10 p.m. because of the amount of homework they have on an average night. Many report sleeping around 11 p.m and waking up at 6 a.m. That is only a seven hour sleep period, which is between 1.5 to 2.5 hours less than the recommended sleep time.

Another major factor that prevents students from sleeping around 9 or 10 p.m. is the production of melatonin, a sleep-inducing hormone. Most teenagers start to produce melatonin around 11 p.m. and won’t stop until 8 a.m. or so. That is a nine-hour period which is the perfect amount of sleep teenagers need to flourish, according to many studies.

Since the production of melatonin lasts until 8 a.m. or so, and the student is forced to disrupt the production because of school, a problem is created for the student’s first period class. Students often start dozing off during first period and cannot comprehend the subject well. According to the National Sleep Foundation poll, 28% of students are not able to concentrate during their first class of the day.

Some students who are sleepy in the morning don’t even show up to school on certain days because the lack of sleep has clouded their judgment. An article published in The New York Times confirms that the more cases that pop up similar to that gradually cause dropout rates to increase.

That same article by The New York Times article also indicated that in 2002 Jessamine County in Kentucky changed its school start time from 7:30 a.m to 8:40 a.m., which dramatically increased school attendance rates.

In 2002 Jessamine County in Kentucky changed its school start time from 7:30 a.m to 8:40 a.m., which dramatically increased school attendance rates.”

Campbell Hall, a K-12 Episcopal day school located in the San Fernando Valley, pushed back their school’s start time to 9:30 on Wednesdays and 8:50 on Mondays, Tuesdays, Thursdays and Fridays about three years ago.

“Our students report that [the change in our school’s start time] is very helpful to them to be able to sleep-in in the mornings because that’s the time they find that they’re getting a good amount of sleep,” said Eileen Wasserman, the assistant head of school at Campbell Hall.

“I think it would be advantageous to have schools start at 9:00 a.m. or so,” said Maurice James, assistant principal of Clark Magnet High School. “Students are staying up later and it’s important for students to get an adequate amount of sleep to be able to develop not only mentally but physically.”

One concern James shared about pushing back start times for schools is that students would be released later in the day and some have responsibilities they need to take care of or jobs that they need to attend to, and they can’t stay at school until 4 or 5.

Campbell Hall school officials said that they were able to push start times and fix that problem. Their school is over at 3:40 instead of 3:30 and all they had to do was extend one week to the school year to make up for lost time.

As an experiment, Tristan Mouradian, a junior at Clark Magnet High School, and I wanted to test the waters for ourselves.

On a normal school night, we forced ourselves to sleep at 9 p.m. and we woke up at 6 a.m., the normal time we wake up at for school. That is a 9-hour window of sleep, which means we shouldn’t be tired when we awoke because that is in the recommended sleeping period, right? The answer is no.

“It was quite difficult to sleep at 9 p.m. to be completely honest,” Mouradian said. “But what surprised me was that when I woke up at 6 a.m., I felt like I couldn’t wake up, just like a usual 6-hour sleeping day.”

Mouradian’s observations connect with the sleep studies. Melatonin production does not commence until 11 p.m., thus sleeping at 9 p.m. is much more difficult than it seems. Also, even though we both got our recommended nine hours of sleep, we woke up while our bodies were still producing the sleep-inducing hormone. That feeling Mouradian discussed of not being able to wake up was him fighting with his body and forcing himself to wake up while producing melatonin.

The result of that was pretty terrible: we both felt exhausted after waking up.

We then tested out a different experiment one day when we did not have school. I told Mouradian to sleep at 11:15 and set his alarm for 8:15, which is still nine hours of sleep; the variable we changed was the times we sleep and wake up. He agreed to do it. We both set our alarms and went to sleep.

“This is absolutely crazy,” Mouradian said. “When Argeen told me that I would feel energized with the same amount of sleep, I told him that he was wrong. When my alarm woke me up at 8:15, I woke up normally and did not dread the morning. I was happy!”

Surprisingly enough, I woke up ten minutes before my alarm even rang. It was true; if you don’t go against melatonin, it can be a really great friend to have.

The result of this experiment was spectacular. We both felt energized when we awoke and we were in a good mood for the rest of the day.

We asked 20 random students at Clark Magnet High School if they would like to see our school’s start time being pushed back, 19 of the 20 thought it would be a great idea.

“Truthfully, I think if schools started later, our minds would be more alert and ready to learn anything we need to at any given time,” said junior Nanor Asadourian.