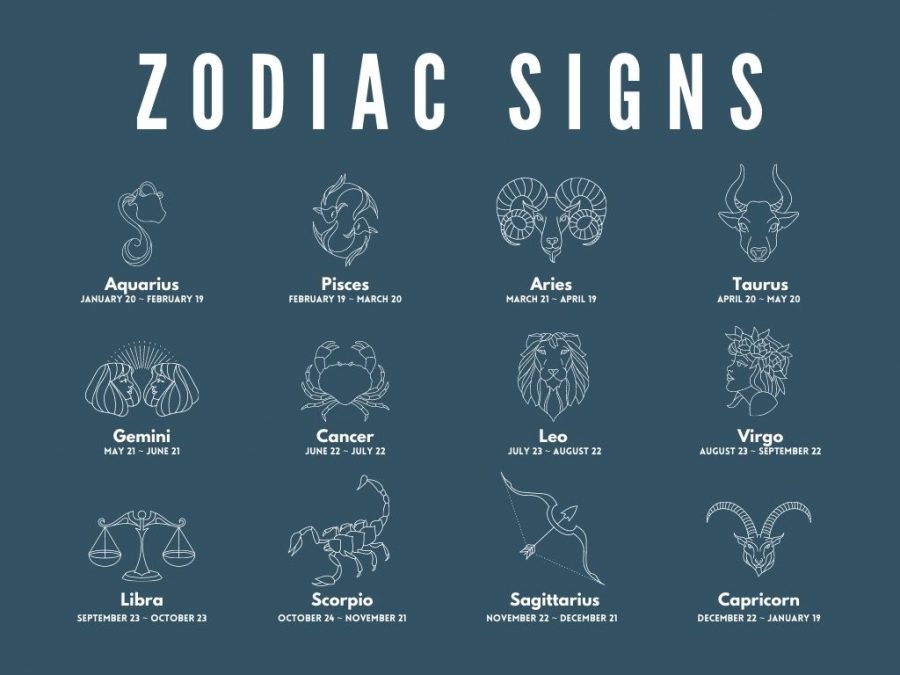 Every zodiac sign has their own domain in the year; these are the signs and their respective birthdates.

Junior Charly Scott believes that no one could have predicted the insanity that was brought on her class this and last year.

“I was super disappointed that the AP World History field trip to the Huntington was canceled because of COVID,” says Scott. “At the moment it seemed like everything was just blown out of proportion- none of us realized how this was just the tip of the iceberg.” It was, in fact, just the beginning of a nearly one and a half year quarantine that would completely change many students’ high school experience.

“Everything just happened so quickly and I don’t think any of us got a chance to really wrap our heads around it,” says Scott. For this reason, it’s no surprise that many high school students have found themselves developing a deep interest in astrology.

Astrology is the forecasting of events or personality through the observation and analysis of the planets. This most often is employed in what most people know as zodiac signs. A person’s birth date and time corresponds to a specific alignment of the planets which can be charted in order to make an assumption about a person’s character. In short, this alignment determines a person’s zodiac sign.

COVID-19 robbed most people of all certainty and security and many teens were left scrambling, looking for answers. Astrology provides a unique perspective on strange situations like the recent pandemic, allowing many to find comfort in its rather bizarre accuracy when nothing else feels reliable.

Although a pseudoscience to many skeptics, sophomore Lilia Hacoupian, president of the Serenity Club, feels like the value of astrology transcends its accuracy. “It amazes me how something so unrelated can pose such accurate descriptions about people based on their birthday,” Hacoupian says. “I also love the historical aspect when it comes to astrology. Over the years, astrologists have developed and studied the constellations to the point of it becoming almost a science of its own.”

“I got into astrology a few years ago, probably around the time I started middle school,” Hacoupian says. She started researching zodiac signs after discovering them on Snapchat and eventually came to learn the meaning of the different constellations and planets. “Astrology has greatly affected my outlook on other people. After doing research on the signs, it has become the first thing I ask someone when I meet them,” says Hacoupian. “ It’s a great conversation starter.”

There are twelve signs in the modern interpretation of the zodiac and each one corresponds to about 31 days in a year. These are Aries, Taurus, Gemini, Cancer, Leo, Virgo, Libra, Scorpio, Sagitarrius, Capricorn, Aquarius, and Pisces. These signs were developed originally in Babylonian times, as early as 1800 BCE.

They hold a very different significance today than they did historically — previously being attributed to the will of the gods or the interpretations of their mythos. Nowadays, the signs are centered around four elements that correspond to a stereotype. Fire signs like Aries, Leo and Sagitarrius are passionate and involved while air signs like Libra, Gemini and Aquarius are typically aloof and unbothered.

Hacoupian founded Serenity Club at Clark centered around astrology so that people like Scott could learn more about themselves from the perspective of the zodiac signs. “Researching things that are not considered “factual” by society really interests me because there is more room for discussion and interpretation,” says Hacoupian. “You can get really into it and analyze people down to the minute they were born.”

It’s not just Hacoupian who has made the push to learn more about astrology. The subject along with others like witchcraft and crystals has gotten immensely popular on TikTok, so much so that there is an entire community of “WitchTok” which is in close proximity to the study of astrology and crystals as well.

Why are these things not only remaining popular, but gaining popularity? Although so obviously false to many and even criticized by some, it’s a wonder why people still indulge in superstitions like astrology and the zodiac. Hacoupian thinks that astrology gives answers that others cannot provide. “When everything is going crazy and nothing seems certain, it’s nice to be able to rely on something that never changes, like the stars,” says Hacoupian.

Getting into astrology, however, is quite difficult. There are a lot of factors and nuanced details that go into the astrological horoscope and finding where to start can be quite difficult. “I recommend getting started with astrology either from a book about the subject, or trusted websites solely dedicated to astrology. Social media sites are unreliable from what I have seen because they post the same stereotypes over and over again, and diminish the value of astrology in general,” says Hacoupian.

There is more to astrology than simply personality traits. For example, one can employ astrology in matchmaking or relationships to measure compatibility. Each star sign has signs that it naturally attracts and repels and understanding these relationships can deepen a connection between people, even on a superficial level.

Astrology invokes the imaginative child that sleeps within every person. In a way it’s almost like playing pretend with an added hint of confirmation bias. “It is also fun to joke around with friends about our signs and how some of our character traits directly fit the descriptions and others don’t,” says Hacoupian. “Overall, it has made my life more interesting and has encouraged me to discover new things.”