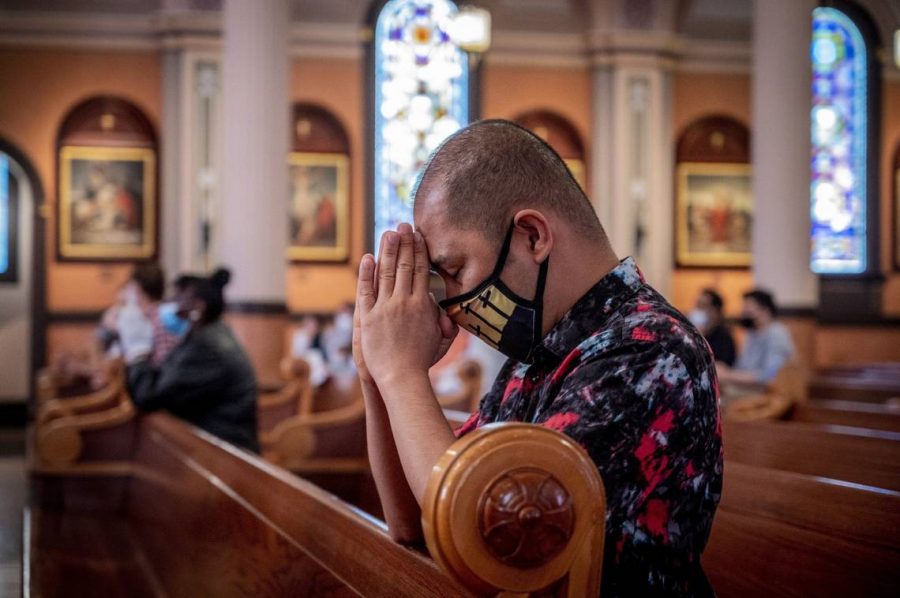 Faith and prayer have been vital during the pandemic for religious communities.

As the doors of stores closed all around the nation in response to the coronavirus pandemic, places of worship had to do the same. As COVID-19 struck the states, people were forced to practice their faith in unconventional ways. Whether it was attending faith sessions over Zoom or practicing on their own time, people’s faith was tested.

When the news of the lockdown first hit the nation, churches were still open for worship. It wasn’t until there were COVID-19 outbreaks due to gatherings for religious purposes when lockdown rules adapted to close places of worship. This pushed places of worship to change the way they practiced their religions.

Although Americans were restricted to the confines of their home, a study conducted by Pew Research Center found that Americans have deepened their religious wellbeing over the course of a few months. Their survey was given to countries that were economically stable like the United States, Sweden and Spain. The survey focused specifically on Christianity, and showed how people grew stronger in their belief, and used their religion to cope with the trauma of the pandemic.

Senior Ernesto Aguilar said his Christian faith has been impacted by the COVID-19 pandemic because it went through a turbulent period in which he lost hope and fell victim to temptation. “The pandemic turned life upside down for everyone overnight and there were times where I genuinely thought that God had left us and that the pandemic was a well deserved punishment to mankind,” Aguilar said. “However, when the school year started and my responsibilities started to pile up, I regained my work ethic and reconnected with my faith, which led me to abandon the bad habits I had picked up and return back and better than ever.”

During this period, turmoil between religions grew larger. The discrimnation between specific religions caused distrust between society and, ultimately, political figures representing these religions.

The ideological gap between people of faith and the scientific community has been large, and many events within the past year have both widened and shrunk this gap. People affiliated with a religion often didn’t follow the rules of the Centers for Disease Control, relying on their faith to protect them from the virus. Places like Rome refused to close down churches, denying the fact that COVID-19 could spread there.

On the other hand, many church leaders discussed ways to stay safe during the pandemic. Several religious leaders even encouraged people to stay on Zoom until the pandemic fully dies down. Many churches and mosques donated medical supplies and money to help fund the different research on the virus. The Hajj, a muslim pilgrmage to Mecca, has been suspended 40 times in order to ensure the saftey of the people and to comply with the demands of the scientific community.

A rising resource that the religious community uses is TikTok. Information about different faiths is crammed into one minute, informing thousands of people at a time. The hashtags attached to the captions often lead users to a whirlpool of videos revolving around the same topic. TikTok was able to inform several users about the Chinese Muslims in detention camps, for example. As videos about this topic went viral, there was more advocating for the release of this persecuted group of people.

Senior Monica Kilamyan said that TikTok brought her closer with her religious communities. She said it was nice to see people all around the world sharing the same experiences she has with her faith and the pandemic. “Yes there are church groups, but I use TikTok more often, so it’s nice to have updates on my faith,” Kilamyan said. “There is a stronger sense of community, and TikTok was able to connect me with people from all over the world.”

As well as a rise in common faiths like Islam and Christianity, there has also been an awakening in the spirtual being. Senior Maneh Hovanesyan said that she isn’t religious but is very connected with her spiritual being, and the pandemic has only strengthened it. “I feel more connected to my surroundings and more aware of the universe, and my belief has definitely grown, but obviously I have my days where I do question everything around me,” Hovanesyan said.

With everyone locked inside their house, people’s faith has created a way to cope with the troubles caused by the pandemic. “Religion teaches us that there is always optimism and hope at the end of the day,” Aguilar said. “Religion teaches us to be considerate of others and mindful of others’ struggles, which is imperative to keep in mind during these times in which everyone is facing a distinct set of challenges.”