Dive in on the intrigue of the anti-mask mentality 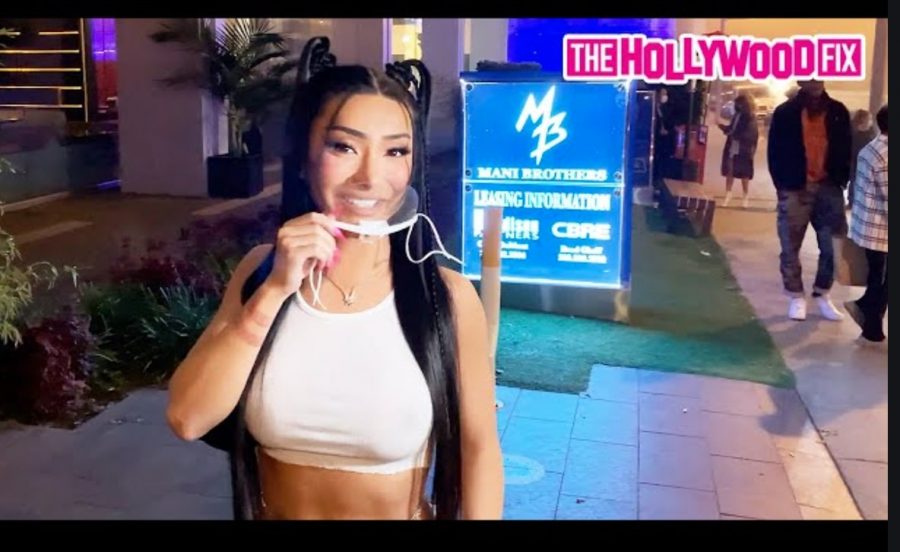 Internet personality Nikita Dragun outside of an L.A. restaurant, holding up her face covering while talking to the paparazzi.

“To be honest, I don’t believe in this ‘Covid,” said sophomore Mayla Khachatourian when asked why she is against wearing masks. “I think it’s just a flu, and it’s not really a big deal. The whole virus is a big political issue. I think the government wants to separate us. We’re poor, there’s riots and chaos, and no unity and peace. Because the recovery rate is 99.9 percent, you get it and chances are you’ll survive.”

An article in Newsweek on Jan. 23 stated that 83 percent of Americans support wearing masks, but only half wear them.

In that percentage come a group of teenagers known as “influencers.” Overnight, many teenagers exploded to fame, making way for a new generation of influencers. Many of the famous influencers grew their fame on their TikTok accounts, which recently gained popularity in late 2019 and early 2020.

In a job where content creators can create content by themselves and still make money, they often choose to gather together, without wearing masks, and create content for their various social media accounts.

Many influencers have thrown large parties in restaurants as well as in their Los Angeles mansions. These parties are often filmed, filled with people and not following any social distancing guidelines.

While the mayor of Los Angeles has made a small effort to shut down the utilities of many content-creating houses, many creators still throw parties and gather without wearing masks.

Many content creating houses known as Sway House, Just a House, Dance Dome LA, and Clubhouse BH have been gathering and filming countless TikTok videos as well as YouTube videos. While they sometimes post pictures of themselves wearing masks going to and from places, the social-distancing is often lax.

Many followers who get photographed with them do wear masks, but only for the photo. They then proceed to walk away, remove their masks and talk amongst themselves. Fans are often furious, and they wonder why these “influences” act this way when they have a huge following. With these teenagers given a large platform comes the same robotic excuse used by countless other influencers: “I am young and I am bound to make mistakes. It was wrong of me and I hope you understand.”

One of the largest content creators, Charli D’amelio, went live on Instagram telling her followers to “stop being so inconsiderate to others,” while a few months later going to the Bahamas, claiming it was “important for my mental health.”

The irony with these teenagers is that the majority of their following is teenagers.

One influencer who has been incredible at social distancing and wearing a mask is Emma Chamberlain. Chamberlain has been creating vlogs from her home and finding many ways to keep her subscribers entertained.

“Emma Chamberlain is one of the best influencers for teenagers right now. She is so unapologetic and unfiltered in her videos, and I think that teenagers today really need to see that side of social media,” said sophomore Ninel Megerditchian. “I always laugh when I watch her videos, and she really brightens up my day. Not only that, it’s the fact that she can create content without being around other influencers, too, and still be relevant and active with her followers.”

“It’s really frustrating,” said sophomore Mariangel Kourkounian. “We worked so hard to stay home and social distance, and then we saw these videos of these influencers and I got really annoyed. Is now really the time to throw that huge party? Nobody has a social life right now and it’s okay.”

However, it isn’t just teenagers that are part of the issue, it’s the adults and politicians they are surrounded by. An example of a politician is Gov. Greg Abbott in Texas. Weeks ago, he lifted Texas’ mask mandate as well as opening up Texas 100 percent. As many teenagers see Texans roaming around without wearing masks, this makes it easy for them to follow in their footsteps, and not wear masks anymore. Former Pres. Trump has also been photographed not wearing a mask while touring a medical equipment facility.

“Just stay home,” Kourkounian added. “I think we should wait a little longer before reopening everything, just for the safety of others.”