I don’t understand, but I can try

Non-Armenians work to demonstrate empathy in the face of trauma 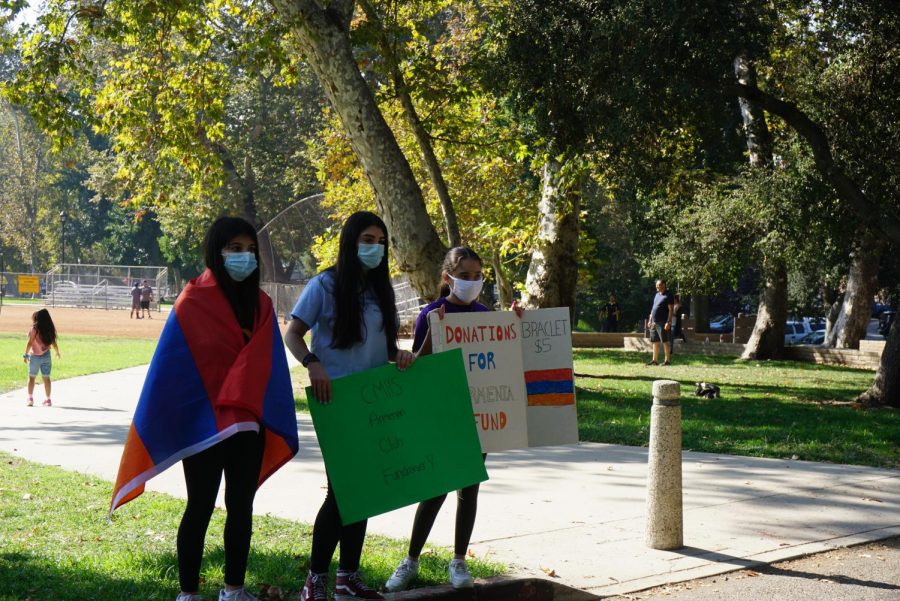 The Armenian Club at Clark Magnet sells jewelry to fundraise for Artsakh.

Glendale is a city with a population made up of about 40 percent Armenian diaspora, (based on a 2005-2007 census). Clark Magnet High school also has a high population of Armenian students.

In July 2020, clashes at the borders of Artsakh began again, and the event known to most people as the Nagorno-Karabakh Conflict arose.The fighting between Armenia and Azerbaijan caused havoc in the lives of neighbors, friends and the Glendale community as a whole — it spiked anxiety levels in Clark students and filled Glendale’s Central Avenue outside of the Armenian Consulate General with candlelight vigils and flag waving protesters.

Many non-Armenians may comprehend the cold facts of a war but not the emotional impact that this conflict has brought to the Armenian community. Sophomore Nathan Scherrer said that he first heard about the Armenian Genocide in fourth grade. He also knows that in April, the Glendale community commemorates the 1.5 million Armenian lives that were lost during the Armenian Genocide. However, he had no prior knowledge about the Nagorno-Karabakh conflict that resurfaced this year.

During a regular club meeting at Enrichment, his Armenian co-leader asked him the question: “Did you know Armenia is going to war?” Scherrer said that he was shocked. “I didn’t really have any knowledge about this conflict beforehand, so that’s how I found out about it. Just through one of my friends.”

Another Clark student, sophomore Yuzuna Kudo, learned about the conflict through social media, reading reliable news sources and through posts her friends were making online. “I do not have any Armenian friends who are struggling directly from the conflict in Artsakh, but I may have had classmates who were suffering quietly,” Kudo said.

How does a non-Armenian understand the psychological effects of this war between Armenia and Azerbaijan? Clark’s school psychologist, Casey Schaeffer, said that the war has affected students and their families in many ways.

As this conflict happened in Artsakh this year, it opened wounds in the Armenian community that were initially inflicted during a systematic genocide that was started by the Ottoman Empire Turks in 1915 and continued into the 1920s. “This is 100 years in the making, looking back at the genocide of the Armenian people, and the trauma and grief of that,” Schaeffer said. “Family members [have] gone through [horrors of war and the present pain that they feel is] what ‘they’ call trans-generational trauma.” (Trans-generational trauma is the present anxieties in people that are amplified by past generational experiences.)

Although Armenian students today were not alive in 1915, they still feel their predecessors’ emotions. It’s as if a grandfather went through a war or suffered through great violence, and he describes it to his daughter. Then the daughter passes these stories down to her child, a current Clark student. Multiply that by living in a community that carries those same memories, and it will inevitably affect any Armenian American today.

This is the experience that Armenian students have had, Schaeffer said. “[What they have been] experiencing [is] what others have talked about, and although it might not be to the same extent it was 100 years ago with the genocide….certainly with the rhetoric and… daily agressions..it… feels like that,” Schaeffer said. “It’s a shared experience.”

The recent war that took place in and around Artsakh echoes the past suffering of the Armenian community. There is a tangible fear that what had happened 100 years ago could happen again. Even though the current conflict may look like it is over, there are lingering effects.

How does a non-Armenian deal with the pain that is once again afflicting the Armenian community? What would truly help to bring some relief to this trans-generational trauma that many young Armenian Americans experience today?

“I’m not Armenian, and part of my experience of this, what this is all about, and what it really means [is] being empathetic,” Schaeffer said. According to him, the war may have ceased but there will always be leftover pain. What we can do to help is lend a listening ear to those who want to talk, and encourage a culture of understanding. To tell someone that you  hear what they’re saying, and to be present and aware of their history…all that requires empathy, something that Schaeffer says is “one of the main ingredients that helps people connect.”

Scherrer agrees that it is hard to empathize with someone, especially when he has never experienced trans-generational trauma. He thinks that it is important to step into another one’s shoes. “I have actually hung out with some of my Armenian friends in person,” he said.

Recently, one of his neighbors who is Armenian contracted Covid-19 right after the Artsakh crisis. “I have been trying to call him every day…like getting in contact with him…making sure he knows that he is not alone. That he has someone to talk to…someone that cares about him, Scherrer said. “If you don’t have someone, you are kinda coiled up, isolated, by yourself.” To Scherrer, empathy is being the available person that a friend can “throw out all [their ] thoughts to.” In the context of the aftermath of the war, it can be giving your Armenian friend the feeling that “[they] have a true friend” to depend on.

According to Kudo, when a community practices empathy, it also leads to less ethnocentrism. Kudo said that she believes ethnocentrism leads to more conflicts and oppression among people. She encourages empathy because when people are open to caring for one another, education can happen at the same time.Those who listen to the pain of others can come to “realize the injustices happening around them,” says Kudo. This leads to compassion and fosters understanding, which in turn breaks down self-centered thinking that ultimately often causes war and conflicts.

“I think we have a stronger community in Glendale because of [the war],” Scherrer said. “Maybe Armenians and non-Armenians… are more aware and everyone can come together.”

Trump is the first president to be impeached twice

Clark community adapts to the new curfew in California

Partying during the pandemic isn’t the answer

Earlier this month, Clark Magnet High School cancelled the scheduled picture day for 9th, 10th and 11th graders. The picture day was slated to be on D...

Remote learning from the perspective of teachers