COVID-19 deprives us all of a true movie experience, learning wise as well

Clark cinema program adapts to the filming during a pandemic 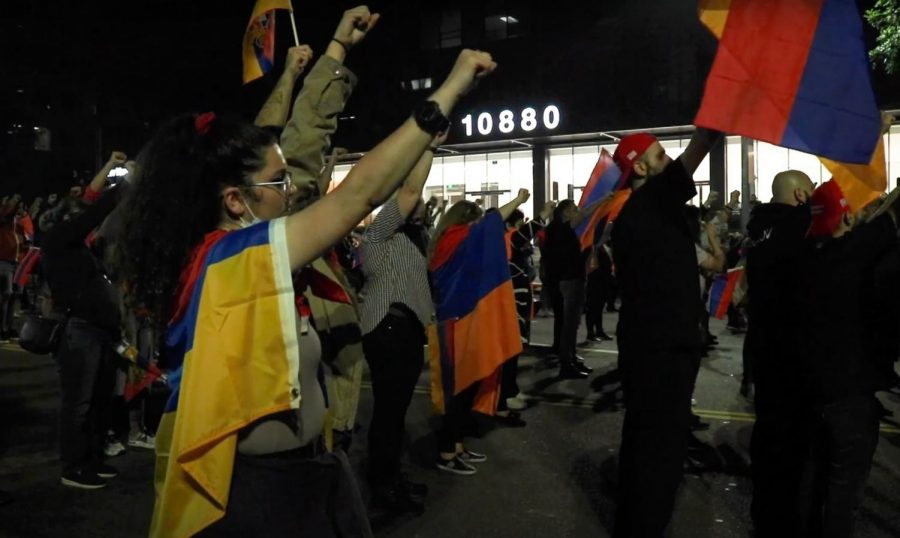 Above is a screenshot from Anna Arutunian’s short film, ‘Clouds.’

2020 might have been the film industry’s worst year yet. With the closure of movie theatres, as well as the stay-at-home order that was released, many television shows and movies did not get to premier on the red carpet.

Riverdale’s fourth season was cut short, Marvel’s Black Widow did not premier in May 2020, and it was pushed ahead an entire year to debut in May 2021.

Marvel’s entire phase 4 project was pushed to 2021, but rumors of filming for one of the projects, which is a television show that follows the Falcon and the Winter Soldier, aka Sam Wilson and Bucky Barnes. 2020 was the very first year that Marvel did not release a new film since 2010.

Not only was the film industry impacted, but so were film/cinema students, aspiring in future careers in film.

“Last year, when I chose cinema as my elective, I was so excited to be working with an actual camera, filming in front of Clark’s green screen and handling a physical camera,” said sophomore Mariangel Kourkonian, a Cinematography 1-2 student. “When we started remote learning, I was so curious to see how we were going to learn without having the resources.”

Cinema 3-4 students at Clark are currently learning how to break down a script, and they do that to better understand the shooting requirements of the scene. Cinema teacher Joshua Bishop assigns them many projects that helps them better understand these concepts, as well as providing many examples.

“It’s very different from last year, to be honest. Last year, we learned basic ideas, such as how to use a microphone, how to make sure the lighting in our shot is perfect, as well as learning how to edit simple clips together,” said sophomore Sarah Manookian, a Cinematography 3-4 student. “This year, however, we are going more into detail to help us widen our knowledge of cinematography in general. For me, it’s a little harder to learn new topics with remote learning. Especially for cinematography, since this specific elective is based on cameras and high tech equipment, like microphones and green screens.”

Clark’s cinematography program has multiple film cameras, microphones, a large green screen, as well as a recording booth. Because of COVID-19, cinematography students have gone without using a physical camera and other tools.

“Being able to use the computers at school is easier since we have access to many different websites and better software than most people might at home. It’s the same with the cameras and microphones as well. When doing a project, it would be more convenient to use the ones at school, since they have much better quality,” Manookian added.

However, many online platforms have been in use to accommodate the lack of cameras and physical equipment.

“I am using as many resources as possible to teach the full curriculum, and we have been quite fortunate to be part of a school district that has invested money into our programs,” Bishop said. “We have presentation resources such as Nearpod and EdPuzzle, remote access software such as Splashtop, a great networking/industry connection tool called Nepris, and, fortunately, at-home access to the full Adobe Creative Suite. I truly believe we could not have been better equipped to handle Distance Learning, and many thanks to all who worked behind the scenes to make this happen.”

There are, however, many other issues with remote learning, especially for a cinema class, which has many different levels, and different things that need to be taught at each grade level.

“In a way, it really does depend on the level,” Bishop said. “I have found Cinema 1-2 to be the easiest to adapt to distance learning, as we really are learning the ABCs of the class. Cinema 5-6 Honors has been a challenge, mainly because two of the biggest projects students typically work on in this level, the capstone film and the AVID Media Composer Certification, require a lot of collaboration, access to the equipment, and computer usage.”

Some positive effects of remote learning is how the students have a bit more freedom with these assignments and projects. If they were to be in class, they would walk around campus in groups of people, under a time limit, and complete these assignments. However, because of remote learning, the students have more time and flexibility to finish these projects at their own pace.

Senior Anna Arutunian, a Cinematography 5-6 student, made a short film called “Clouds” in a very short and intimidating time interval. She entered her short film in the PTA Reflections contest.

“My main inspiration behind it was the war going on in Armenia and the fight for Artsakh,” Arutunian said. “This situation was such an immense source of stress onto myself, my family and for my fellow peers at Clark, I felt like I had to do something to speak on it. I still have a lot of feelings and thoughts about this subject, and the Reflections contest felt like the perfect opportunity to put them out in the open.”

Arutunian said that this was her first time making a short film by herself, and she had a constrictive timeline to compose a concept, write a cohesive script, record a voiceover, choose music, film and edit it.

“One of my biggest worries before starting this project was the resources, but that turned out to be surprisingly easy to manage,” Arutunian said. “I got my equipment, and gained access to Premier Pro with no complications at all. With practice I eventually got used to using everything. Filming and editing were definitely a lot of fun, but stressful; I found out that I actually really enjoyed editing since this was the first time I’d done it myself. In the end, I am so proud of myself and the message that I was trying to convey with this short film.”