Although students are limited to how they can work out, many have found fun and enjoyable exercises while staying safe. 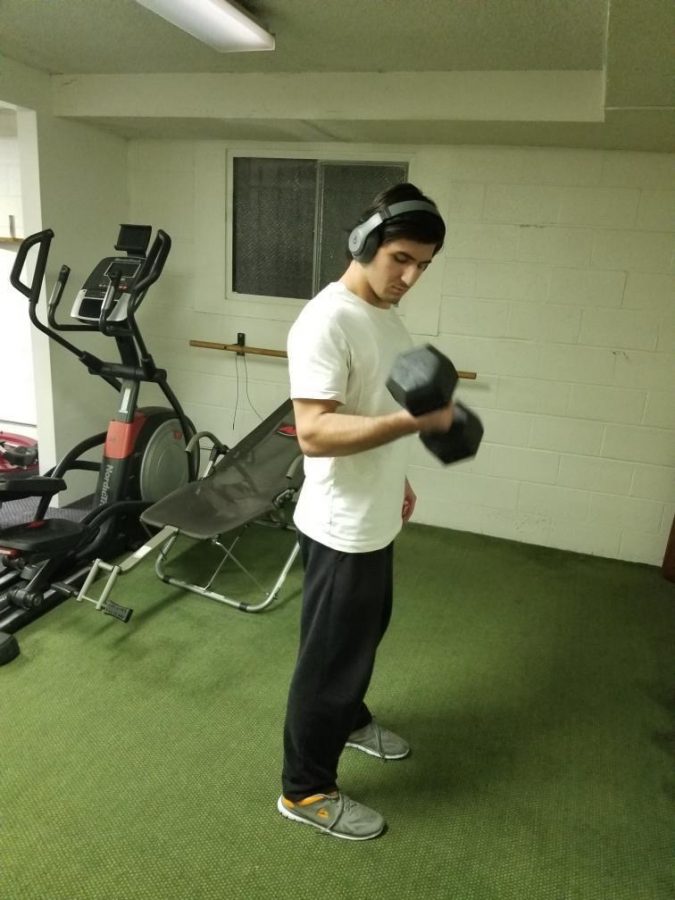 David Akskalyan works out in his at home gym.

Nicholas Garibyan, a senior from Glendale High School, found a way to work out and stay safe at the same time. “I still exercise by running to the park every day with my friends,” Garibyan said. “We still stay safe because we keep our masks on and social distance from others that we don’t know.”

As Garibyan notes, there are still ways to safely exercise with friends during a pandemic. Just because social distancing and quarantining is still in effect, it does not mean that individuals can’t go workout with their friends. Some people need their friends in order to push them to get the exercise they need. This just means that safety guidelines such as keeping a mask on and staying six feet apart from other people should be followed.

Ever since the global pandemic hit the United States, many people have been facing difficulties in order to exercise daily during quarantine. This is due to the fact that workout facilities are closed, and no one can access an indoor gym for the time being. But, there are still plenty of ways to stay active.

Calisthenics are body weight workouts that do not require equipment. A few examples of calisthenic workouts include pushups, situps and pullups. According to Matt Hodges, a health and nutrition adviser, calisthenics are proven to be one of the most productive and impactful types of training for the human body. Calisthenics could be especially useful during quarantine since the only requirement is your own body.

In some cases, calisthenics may even be better than using weights for certain individuals. This is mostly for younger kids because their bodies are still growing and developing. According to Sara Lindberg, a freelance writer who focuses on health, weight lifting for younger kids can sometimes harm or diminish their body from developing to its full potential. However, there are ways for children to safely lift weights with correct form.

Although calisthenics is a good exercising alternative, some individuals still prefer to incorporate weights into their workouts. The only problem that some may have is actually being able to find or order any sort of weights and other type of training equipment. This is due to the fact that those who would regularly work out at gyms could no longer access any of the equipment from the gyms. This has caused customers to panic and purchase all forms of dumbbells and training machines at the start of quarantine.

According to Colleen Logan, the vice president of marketing at Icon Health and Fitness, he saw a drastic raise in sports equipment sales. “We started seeing crazy, crazy sales everyday,” Logan said. “The second quarter of 2020 was one of the strongest quarters ever for our company, highlighted by record sales.”

David Akskalyan, a senior from Clark Magnet High School, said that he ordered weights early on in the pandemic. “When I found out that we were about to face a pandemic, I ordered a bunch of equipment to work out at home,”said Akskalyan. “I have basically created my own gym at home. I do the same exercises at home as I would going to an actual gym.”

A problem people face is that they are unaware of what types of exercises they can do at home with a limited amount of equipment. But there are plenty of ways to figure out how to train with what you have.

Hagop Arabian, a former high school athlete, once faced this issue too, but it was a very simple solution to figure out how he can strengthen his body. “All I had to do was search which part of my body I wanted to work on, and I found plenty of exercises online,” Arabian said. “I had also once torn my ACL, and I wasn’t really sure what exercises to do in order to strengthen my leg again. So all I did was search it, and I found plenty of workouts to help me strengthen my leg again throughout rehab.”

YouTube has plenty of videos which could help out with almost any form of training and workouts. Arabian, for example, found YouTube helpful throughout his recovery process. What Arabian had found helpful were the variety of videos that had guided him in his recovery. There were plenty of videos from actual doctors and trainers which had been a huge help to him recovering.

Student athletes have especially been finding it difficult to incorporate team sports into their daily lives due to social distancing. Indoor basketball courts are currently closed. Outdoor courts such as the ones located inside public parks have removed the basketball hoops in order to discourage large crowds from gathering. Soccer players face the same issues because outdoor soccer fields have shut down completely.

In spite of basketball courts and soccer fields being shut down, it does not necessarily mean that there is no way to play these sports. Many people can still go to the park and play soccer without an actual goal. As long as you have a soccer ball, you can make the goals out of anything such as cones or backpacks.

“My friends and I still go to the park and play soccer almost every day,” said Jason Chaves, a member of the Glendale High School soccer team. “All we do is bring some cones and set them up as goals.”

As for playing basketball, many people have a hoop in their backyard or driveway. So those who do own a hoop can just invite their friends over at any time and play a game of pickup basketball.

“For the past few months I’ve been calling my friends over to my house, and we’ve been playing basketball in my backyard,” said Sonia Aydenjian, former varsity senior Hoover Basketball player. “It’s the only way my friends and I can play basketball together since all the hoops in public parks are taken down.”