Virtual learning has become a big part of students’ day 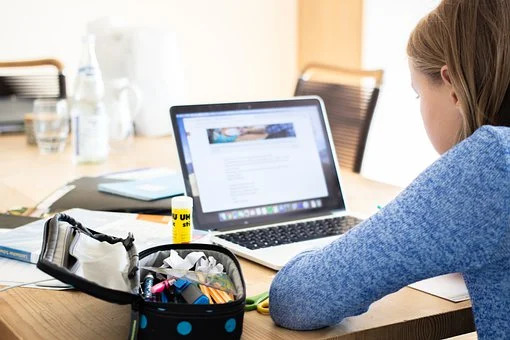 During distance learning, students have reported an increase in mental health needs.

Click after click, students are attempting to adjust to distance learning. With a drastic increase in screen time and a decrease in human interaction, some students are feeling the toll of online school on their mental health.

“I’m constantly worried and stressed about missing an assignment,” said sophomore Maria Galstyan. “With so many websites to check  I always think, oh, what if a teacher posted an assignment and I missed it or what if they emailed me,” Galstyan said. “Tech problems have also affected my mental health. Just a few days ago my internet cut off and I couldn’t join class. I was so frustrated I started crying.”

Students are not the only ones seeing the effects of online school. Director of psychology and neuropsychology at the Hopkins All Children’s Hospital, Jennifer Katzenstein said, “Increased screen time usage, especially for non-academic activities, has been found to be linked with increases in depression, anxiety and perceived attention problems.”

Clark psychologist Casey Schaeffer said that the students he has worked with have mostly shared feelings of stress due to online learning. “The most common symptoms that I see amongst students are feelings of overwhelm, anxiety and exhaustion,” Schaeffer said. Even though it may not seem exhausting to sit in front of a computer, it is.”

In a survey conducted in California, a majority of students reported that their mental health needs have risen. “More than half the students who responded to the survey said they’re in need of mental health support since the school closures began in mid-March,” EdSource said. “That includes 22% who said they were receiving some kind of support before the closures but now have limited or no access to those services and an additional 32% who said their mental health needs have arisen since schools closed.”

Students definitely feel these symptoms. “Sometimes I feel so exhausted at the end of the day because of how much time I’m spending in front of the computer,” said Glendale High School freshman Juile Sarad. “Sitting in front of a computer screen all day makes me feel lonely. I definitely think that schools should shorten the Zoom sessions a little and teachers should try to have more breakout room sessions for students to communicate with one another.”

Most students interviewed for this article said that they prefer in-person learning because of the classroom environment. Senior Nune Saratikyan said that she performs better and is more focused in a classroom environment. “I also prefer in-person learning over virtual because of the social interaction aspect,” Saratikyan said. “I feel that learning with groups helps too and online, there isn’t too much group work.” Saratikyan feels that even with breakout rooms the interaction doesn’t feel the same.

Among students, fatigue or exhaustion isn’t the biggest downside of virtual learning; it’s often the lack of communication. Students miss being able to talk to peers, friends and teachers.

“I do feel stressed and tired more during virtual learning than at school, but the biggest downside for me is not being able to see my friends and talk to them. Even though I can call my friends it doesn’t replace talking to them face to face,” said freshman Nare Babakhanian. “Oftentimes it’s the lack of communication that affects my mental health more than anything else.”

However, some students don’t feel that online school is that bad. “I don’t really prefer one or the other; I’m pretty neutral about both. Each type of schooling has its pros and cons, but personally, for me, it’s not as terrible as I thought it would be,” said junior Nicole Aslanian. “I don’t really feel like my mental health has been affected by online school. The only thing about me that has been affected is how I communicate because during quarantine I have become quieter.”

Schaffer recommends for students who experience anxiety, stress and fatigue to immerse in self-care. “I recommend for students and parents to do enjoyable activities like going on walks, learning new recipes, and talking with each other,” Schaeffer said. “Doing activities that bring them joy will relive all those symptoms.”

Saratikyan also recommends talking with family to relieve stress and fatigue. “I think that talking to family members helps me get away from my computer screen and sometimes they give good advice on how to feel less stressed,” Saratikyan said.

“Even though online school has some downsides there are positive things too,” Babakhanian said. “You can learn from the comfort of your own home at your own pace but without a lot of socializing.”