Teens lead the charge for a greener future 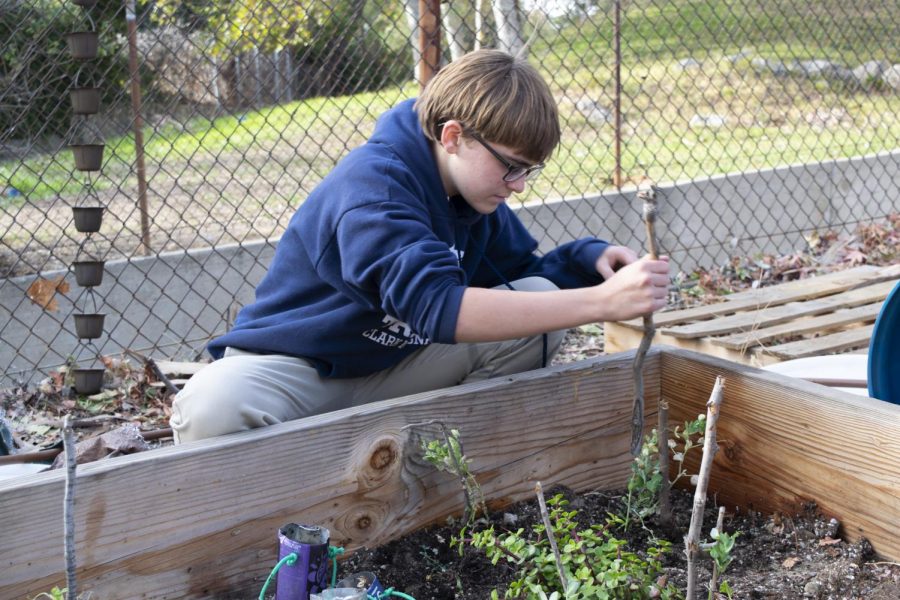 Naomi Beach is passionate about the state of the environment and takes action to improve it.

In the age of Hydro Flasks™️ and metal straws, teenage consciousness of human impact on the world has reached an all-time high. Students at Clark participate in the environmental-consciousness wave in different ways.

Senior Naomi Beach joined Clark’s Green Club during her freshman year and was co-president of the club during her sophomore and junior years in order to involve herself in the preservation of the environment. “I believe the only way to save planet Earth’s natural ecosystems is wide-scale government interference with corporate entities,” Beach said.

She has strong beliefs about this topic and has considered what she and others can do to help. “The best way for me to change the environment is to get green policy passed through my vote and my lobbying. Battling consumerism, buying local, avoiding Amazon delivery, and not getting new electronics — the mining involved is incredibly harmful — is necessary,” Beach said.

Similarly, senior Michael Tolmajian is aware of the consequences of consumerism, as he is one of several students at Clark who enjoys their water out of a stainless steel water bottle, specifically the Hydroflask™️ that has gone viral on social media platforms like VSCO and TikTok. “It wasn’t only the fact that it was trending,” Tolmajian said. “I have also seen videos about global warming and sea creatures dying from pollution like water bottles.”

His concerns stem from videos he had seen on Instagram that triggered an emotional response deep enough to make him invest in a reusable water bottle. He had noticed more frequent posts about the environment from social media influencers, celebrities and even his own friends. “Even though it’s a small change I made, I feel like I’m helping the world,” Tolmajian said.

Junior Karina Gevorkian is part of a smaller demographic of people who manifest their concern for the condition of the environment by regularly using metal straws. She usually carries one in her purse and one in her backpack in case she encounters a beverage that would normally be consumed with a plastic straw.

“Honestly, I got them because Jeffree Star was selling them, but I do like feeling like I’m helping the environment,” Gevorkian said. She said that videos she has seen in her Instagram and YouTube feeds that depict gruesome images of helpless animals, like sea turtles and seagulls, suffering at the hands of disposable plastic products were more than enough to make her pity the guiltless creatures. Single-use plastic straws, for example, have ended up getting lodged in the nostrils of sea turtles and causing immense pain for them, and removing them from the turtles’ bodies is also a painful ordeal.

“I felt so bad when I saw the effect human carelessness had on an innocent life,” Gevorkian said. Her statement holds more truth than she knows, since some estimates suggest that over one million marine creatures die annually due to plastic pollution.

Greta Thunberg is a strong example of teenage proactivity in the larger sphere. At just 16 years old, Thunberg riled up older generations and encouraged younger generations with her spirited speech condemning world leaders for their irresponsibility regarding the declining state of the environment.

“We are in the beginning of a mass extinction and all you can talk about is money and fairy tales of eternal economic growth – how dare you!” Thunberg said to the audience at United Nations headquarters in New York on Sept. 23. Thunberg’s expressions enhanced her heated words and allowed her to deliver a speech so far-reaching that President Donald Trump acknowledged her in a tweet, although it has been widely interpreted as mocking. Thunberg’s passion reflects the interest some people from Generation Z have for preserving nature.

Celebrities can also be major contributors toward determining teen attitudes regarding climate change. Popular singer Billie Eilish shared a tweet captioned “TICK TOCK! our time is running out. the climate crisis is very real. we need to speak up and demand that our leaders take action.” Eilish’s fanbase is primarily comprised of young teens, so her advocacy reaches a generation of impressionable people.

Eilish also encourages her devoted fans to bring refillable water bottles to her upcoming world tour, in efforts to make a statement about ecological consciousness. According to the Plastic Pollution Organization, eight million tons of plastic wind up in our oceans each year, and take hundreds to thousands of years to decompose. Eilish’s earnest efforts are conveyed to her teenage fanbase.

Starbucks has also taken part in the eco-conscious movement by making a small but controversial change. If you are a regular at Starbucks, you have noticed that the barista will no longer give you a straw with your drink and instead use a new lid on your cup that has an opening for your mouth. However, customers are still allowed to request a straw from the barista for their drink or grab one from the self-service station.

Starbucks serves 60 million customers each week, and millions of those drinks are iced coffees, iced teas or other cold drinks that would normally be consumed with a straw. Although it may seem like an insignificant and trivial change considering the coffee giant still produces millions of plastic cups and lids every year that eventually litter the earth, the change has the potential to reduce the amount of plastic straws that are used every day by millions.

Teenagers are among Starbucks’ most popular customers, and the change in protocol was broadcast on social media through memes and news stories. The alteration sparked an online conversation about the effects straws have on both our coffees and our environment.

Gevorkian commented on the direction in which the teenage mindset seems to be going: “I’m just glad teenagers are more aware and are having conversations about important things like this,” Gevorkian said.