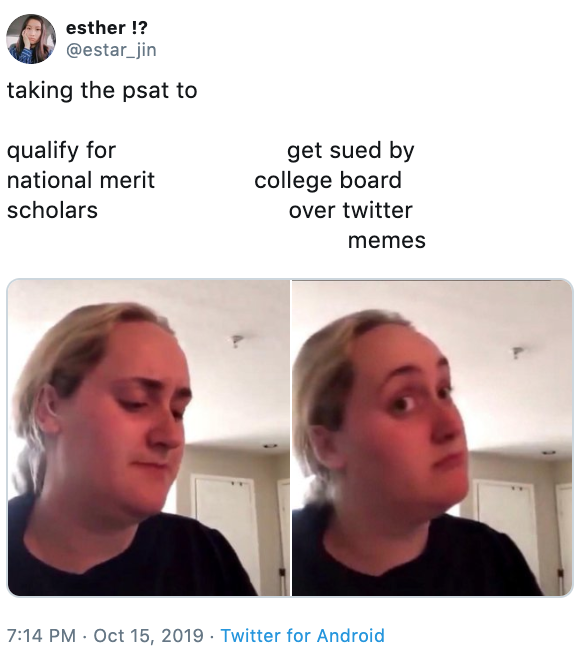 The annual PSAT has come and gone. PSAT memes are no longer trending on Twitter. The same old articles reporting on College Board’s frustration with disobedient test-takers get replaced the next October. Above all, this year’s juniors must accept that by no longer being required to take the PSAT, they won’t understand its future memes.

With the end of one era comes another: the SAT. Yet while post-PSAT memes are possible, posting SAT memes isn’t. Not only will there be no SAT content for students to laugh about, but the exam actually matters in students’ eyes.

Compared to the PSAT, the SAT is a downgrade. To have a laugh, upperclassmen turn to memes that, though funny, are a different funny than the PSAT memes only they understood.

However, everyone should get in on the joke, especially with the raging debate over whether the SAT and ACT should continue being college-required. Yet, due to legalities (and a fear of a possibly-voided PSAT), there aren’t any PSAT-content memes. However, College Board encouraged test-takers not to post PSAT-related memes through memes – quality content – so this article will take advantage of this.

As a precaution, College Board’s PSAT confidentiality statement is disclosed, but fellow PSAT-takers should already be familiar with this (if signed). “By signing this you agree not to disclose specific test questions through any form of communication including emails, text messages, internet posts, or any other way on the internet,” wrote College Board. Bringing up this contract was done so to prove this story abides by the PSAT’s issued statement.

Before getting into the list, be sure to sit back, (remember the answer for number fourteen on the calculator section), and 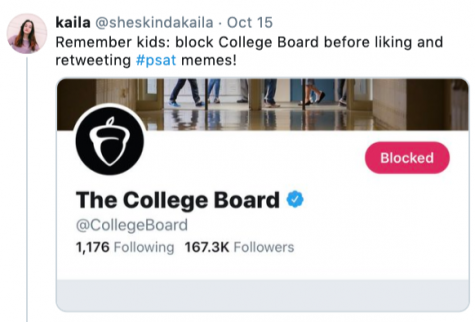 (Above) Twitter user @sheskindakaelia reminded Twitter users to block @CollegeBoard, which prevents the voiding of one’s PSAT score. Unless that user is the user below. 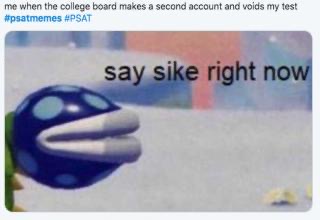 (Above) The Twitter user may not have created this meme format, but they sure have made it into something to be remembered. 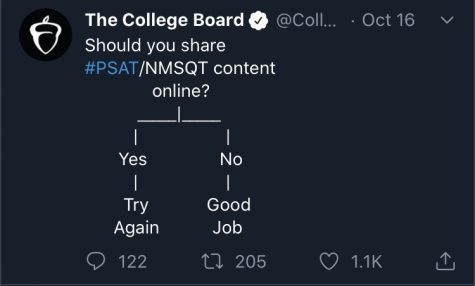 “I love how the College Board really tries…” junior Andre Hiwatig explained, “but they’re no match for teens on Twitter. 7/10.” An attempt was made.

When junior Sophia Pogosyan was asked for her take on the meme, she said, “I think this one is a little more funny than the [third] one because it uses dry humor which I appreciate. An 8/10.” That’s fair.

Unlike Hiwatig and Pogosyan, Twitter totaled this meme when they took it into its own hands: 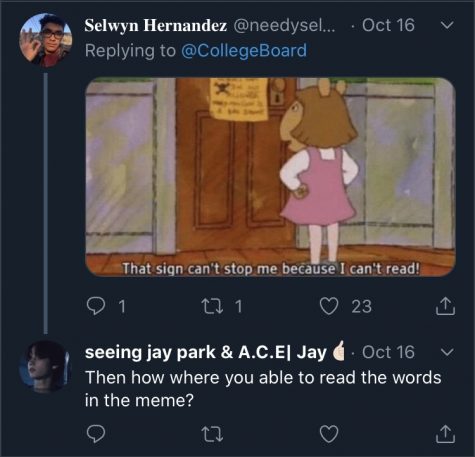 (Above) Not only are users unafraid to poke fun at College Board, but they’re also calling out others’ antics. Luckily, this leads to funny tweets and even funnier arguments, like this photo. 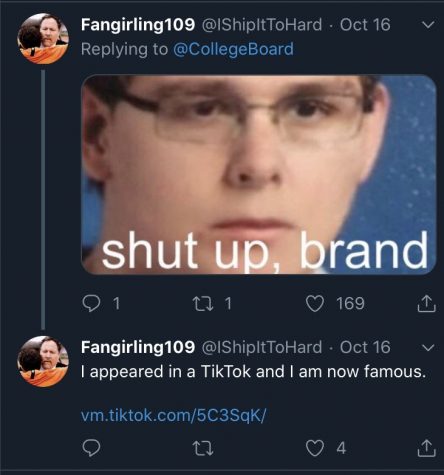 (Above) For most users, making PSAT memes is done either out of spite or for laughs. @IShipItToHard is one such user who also experienced a moment of fame due to their meme.

Not much can be said about this tweet except that it garnered less attention than College Board’s other memes. Considering it was later deleted, there’s a valid reason why. 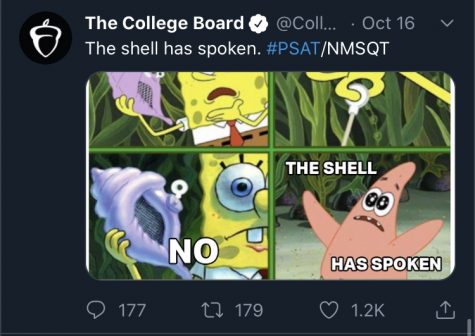 Seeing this meme, junior Ian Fabre said this about it: “Seven out of ten because it has SpongeBob.” Need he say more? 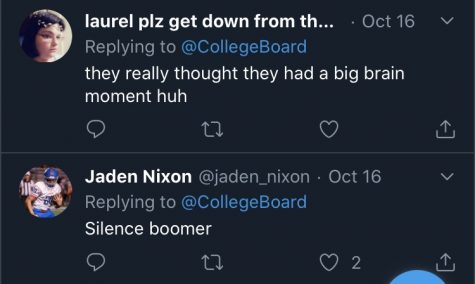 (Above) Twitter users @len_dop and @jaden_nixon were not having it with College Board. Understandable considering how this was College Board’s third consecutive PSAT tweet.

No matter how many warnings College Board issued, students – as they do every year – posted PSAT-related memes. This next list will recount the students’ trip known as the PSAT through memes and tweets. From students’ days leading to the PSAT to their thoughts during/after it, this list documents the 2019 PSAT experience without the PSAT-content memes in the order they happened.

It’s that time of the year again:

(Above) Though blunt (but not wrong), user @callmecum reminds Twitter of today’s date: Oct. 16, the day of the PSAT – to put it nicely. 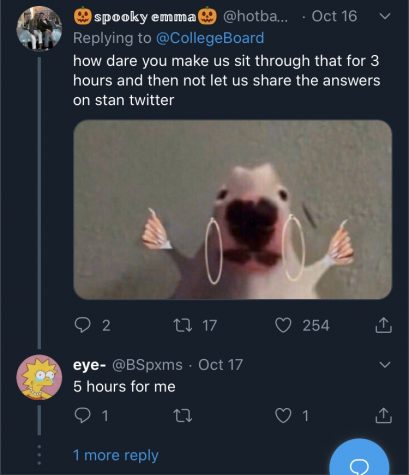 Now, nobody has ever enjoyed taking the PSAT (though it does mean missing classes), so this meme posted by user @estar_jin speaks to everyone: 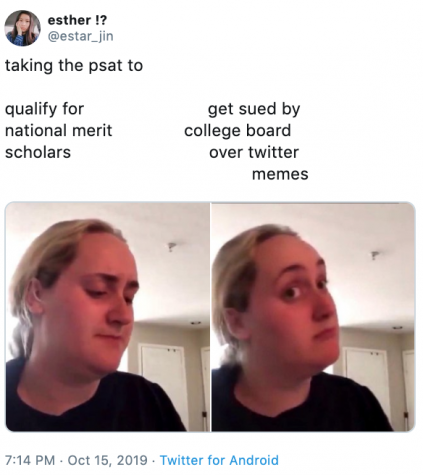 (Above) @esther_jin’s tweet is everyone’s mindset heading into the PSAT.

While nobody enjoys the PSAT, some students do prepare for it while others don’t. For the students who didn’t prepare for the PSAT, these next two memes will feel familiar: 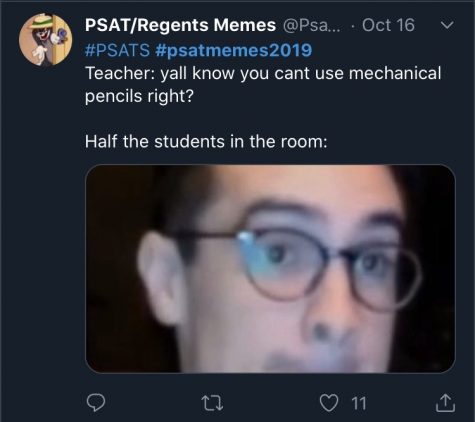 (Above) As Twitter user @PsatRegentMemes’s tweet pointed out, no matter how many reminders were given, students still used a mechanical pencil rather than a #2 pencil.

Above all else, being the missing-material kind of unprepared doesn’t compare to being academically unprepared as user @HaileysW0rld puts it: 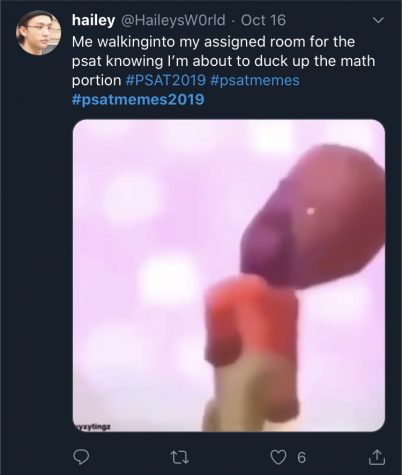 Not even minutes into the PSAT, students remembered the PSAT would last three hours (five if for the unlucky) and in that moment, everyone’s stomach did this: 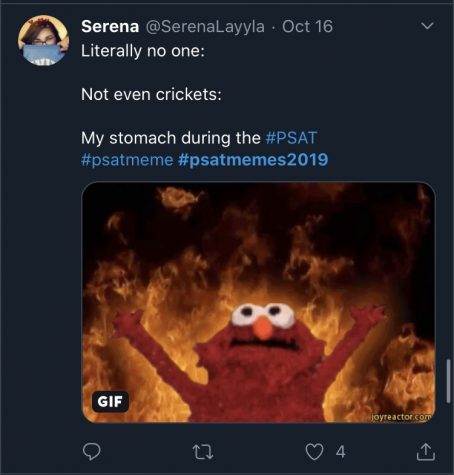 (Above) User @SerenaLayyla’s tweet captured every hungry students’ thoughts on something they felt was just a me-problem (not even the snack-breaks could satisfy their appetite).

Pushing through the hunger pains, students worked on the english section for 95 minutes and felt relieved afterwards unless they were that one person: 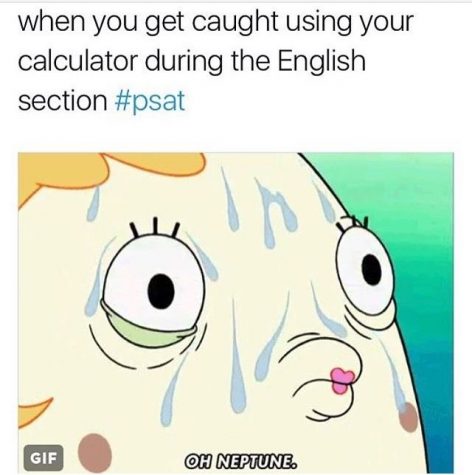 (Above) Not that anyone ever would use a calculator during the math section (contrary to the proctors’ beliefs), but this meme still made everyone fill with dread.

After conquering the English section, students began the difficult conquest of a math section and there’s so much to say about it, as evident by these next couple memes: 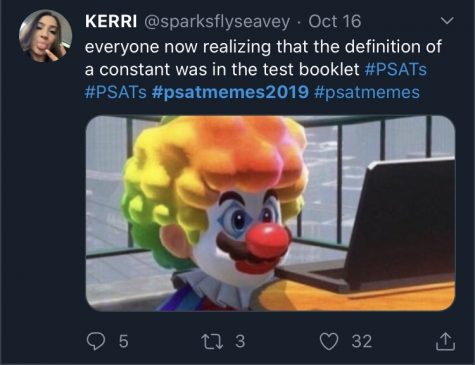 (Above) Some students already knew what a constant is, but others didn’t, so @sparksflyseavey’s tweet captures those people’s feelings of clownery perfectly.

This article’s “calculator section” references might be a repetitive inside joke, but it’s totally valid as @66sixela said this about it: 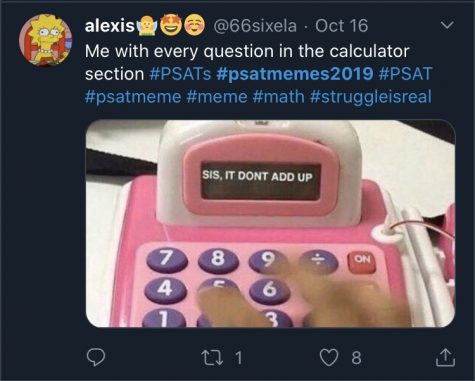 (Above) @66sixela admits on students’ behalf the calculator section was confusing.

Just like that, the PSAT was finished (except for those who had to write that essay); booklets were being collected, students waited for the bell, and the real ones: 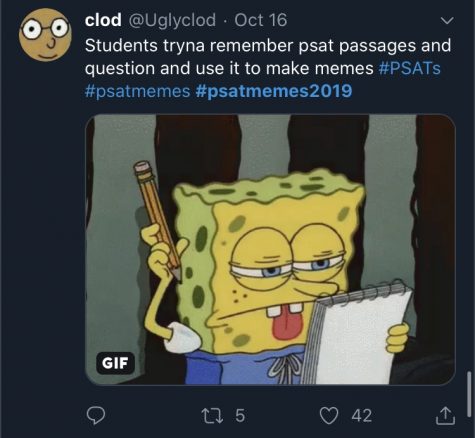 If any PSAT-taker wants to file a complaint against College Board, they can do so in a template that @fatbbgpt2 created (whose format College Board can understand):

(Above) Here, @fatbbgpt2 appeals to every essay graders’ emotions by integrating a riveting word choice in comprehensible sentences.

For those with no fear of a revoked PSAT, here’s a meme just for them (by them): 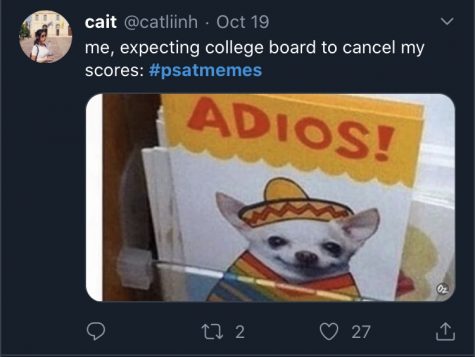 (Above) Fearless students posted their meme renditions of the PSAT on Twitter and some users like @catliinh actually wait for College Board to approach them.

While its hype may have died down, the PSAT’s legacy remains: juniors can appreciate their meme-dominated PSAT experience; sophomores can help protect this legacy no matter College Board’s unformidable warnings; and freshmen understand that much is expected of them next October. If the memes aren’t random and inexplicable, then they weren’t done right. 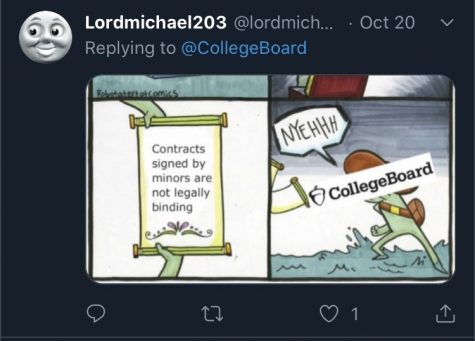 (Above) User @lordmichael203’s post is the reminder everyone needed, saying that despite College Board’s efforts, PSAT memes aren’t entirely illegal, but that’s debatable.