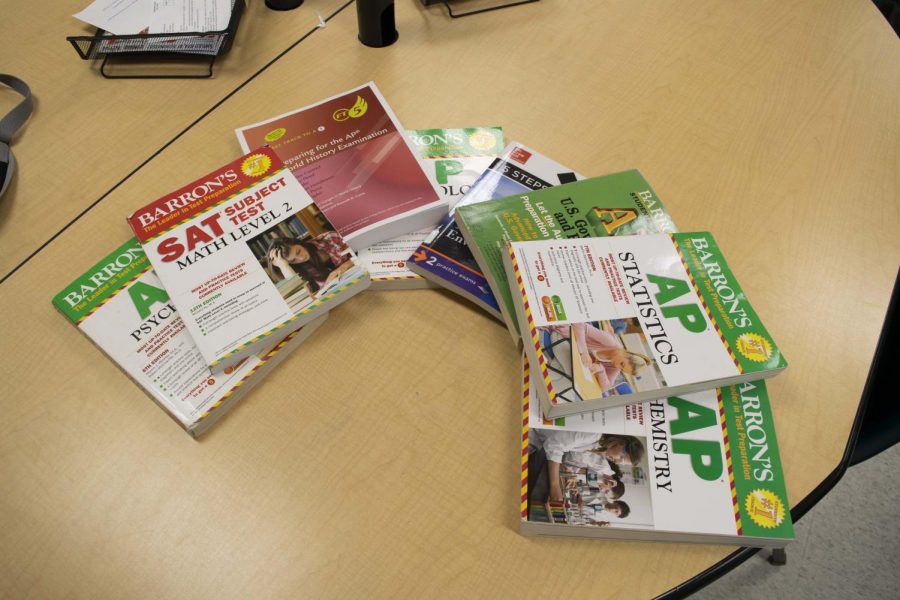 Several of the AP and SAT prep books that students use to study for nation-wide tests.

Going behind the scenes with AP Test Graders

Last June, AP English Lit. Composition teacher Stephanie Sajjadieh went to Kansas City, Missouri to attend the AP Reading, an annual event where thousands of educators score students’ free-response questions from the AP Exams that were administered earlier in the year. The entire week the AP test graders start from 8 a.m. and end at 5 p.m. with occasional snack breaks and lunch breaks.

Sajjadieh said that grading essays was no easy task. “You’re just grading papers from eight in the morning till five in the afternoon, for seven days in a row,” Sajjadieh said. “You have a one hour break for lunch and two 15 minute breaks.”

Many high school students may feel obligated to take a bunch of AP courses and take tests for college. Of course, with an AP course or class comes the annual tests, usually taken around the first two weeks of May. Teachers spend the entire year teaching and testing students on the material so when the time comes, in May, they are ready and prepared for the test.

After these tests are done, most students just wait, for what feels like an excruciating amount of time, for these tests to be graded and sent back to the students over the summer break. Behind the scenes, there are AP test graders, like Sajjadieh, for each subject available working for College Board. However, the process of becoming an AP test grader and their job is not simple.

Sajjadieh has scored AP tests for eight years. Sajjadieh said that even though the subjects don’t relate with one another, most of the AP test grading system is the same.

In Sajjadieh’s case, AP graders were given 25 essays of one topic in a folder to grade, and after finishing that one bundle, graders would grade another packet of 25 essays. In total, Sajjadieh said that she graded over 2,000 papers in that week.

Sajjadieh said that roughly 400 people grade essays every year for AP English Lit. Composition exam.  Afterwards, the graders usually spend the day in groups looking over other essays and seeing what type of papers got certain grades. Within each group there are table leaders who make sure that everyone in their group is scoring accurately and they go through each of the grades carefully to make sure that the scores are fair, consistent and not biased.

With these heavy responsibilities of a grader, they have requirements to meet in order for them to become an AP test grader. Sajjadieh said that the teachers must have taught the course for three years and submit a resume. In addition, if the teacher is not promoted, after eight years of serving the AP test grading system, they will find someone new to the process and replace them.

First time AP World History teacher Christopher Davis has said that if he ever got the chance to grade the AP World exam, he would not take up the opportunity. “I love teaching the course and I like working with my students. And while I know it would be beneficial to me to get the bigger picture of how students do [on the test], I know I could also look at the AP College Board test, and grade these tests online,” Davis said.

However, many teachers still think that grading these essays at the annual conference is worth the experience.

AP Spanish teacher Victoria Marcucci had the opportunity to grade the AP Spanish tests for the first time last summer. Marcucci said that she was nervous when she first started. “I wanted to make sure that I did a good job,” Marcucci said. “I wasn’t exactly sure of what to expect or how fast and the working conditions were. I liked how they trained us and showed us difficult papers to grade, even the ones that the  trainers debated over with.”

Marcucci said that later she came to enjoy the process, and that one of things she really liked during that time was how accurate she was, considering that it was her first time.

“When I started grading, at first I thought I was too harsh and I kept doubting myself about the scores,” Marcucci said. “Then I found myself that when I was grading, these papers that I had were going to be checked twice to be fair. It turned out that I was a hundred percent accurate grading and my table leader said that I was spot on considering that it was my first time.”

All three AP teachers and that College Board have the same advice for students who take too many AP classes: Students shouldn’t be taking the class just to simply obtain the 4.0+ GPA. Students should be taking these courses because they find the class interesting and possibly want to pursue in a career path in the future, related to the AP course.

“The AP Program encourages students to challenge themselves without taking on more than they can handle,” Alcón-Heraux said.