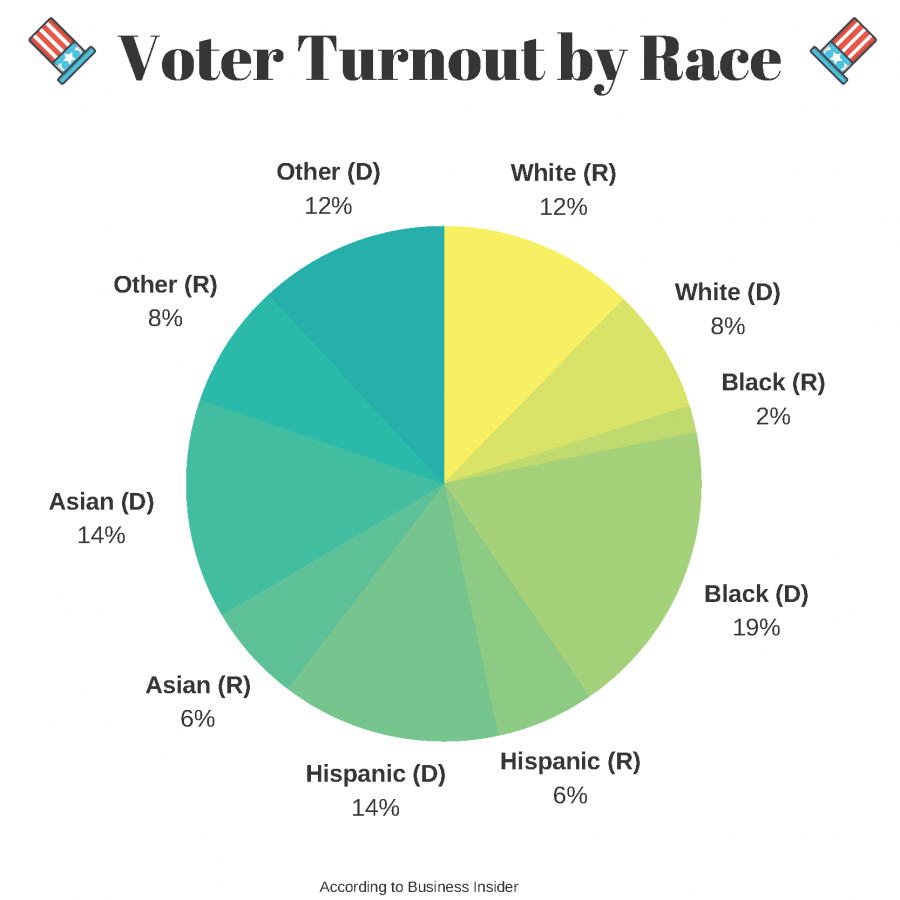 Minorities react to life in the Trump Era

On Nov. 9, 2016, the U.S. was greeted with a new president-elect, Donald Trump. Many were shocked over the loss of Democrat Hillary Clinton while others were pleased with the results. Those with unsavory opinions about Trump were also filled with fear of what is to come the next four years.

“Aside from an economic standpoint, he was one of the least qualified candidates, so for me to hear the results it was a heavy thing to process,” said senior Rania Mamo. “I am worried for the future of everyone who has been hurt by his hateful speech and actions.”

Some of the groups affected by Trump’s presidency include Latinos, Blacks, LGBTQ and Muslim communities.

I am worried for the future of everyone who has been hurt by his hateful speech and actions.”

As his presidency began, many minorities saw a wave of anxiety sweep over the public. Following his inauguration, millions of protesters participated in the Women’s March on Jan. 21 to advocate for issues like immigration reform, LGBTQ rights and equality. This rally was initially only supposed to take place in Washington, D.C., but later the organizer’s attempts began to spread on Facebook. Soon after, more cities participated in the protest, one of them being Los Angeles. Roughly 5 million people were in attendance in opposition to the new administration.

In his seventh week in office, Pres. Trump signed an order that suspended the admission of all refugees to the United States for 120 days, prohibited the entry of Syrian refugees entirely, prioritized the refugee claims of non-Muslims in the Middle East, and banned citizens of seven Muslim-majority countries from entering the U.S.

Sophomore Celine Minasian was scared for her friends and family who are from Iran. “I know my friend’s aunt went to Iran and she isn’t a citizen and she has been there for three months now,” Minasian said.

Trump justified this order by claiming it was for “national security”; however, some claim that it was a discriminatory ban against innocent ethnicities because it did not apply to some nationalities (Saudi Arabia, the United Arab Emirates and Egypt) who were held accountable for the 9/11 attacks.

I’m amazed by the amount of support everyone was sympathizing for Muslims because it’s apparent that this decision was a direct attack on Muslims.”

According to CNN, there have been no terrorist attacks committed by people from the original travel ban countries. In fact, the most recent attack on U.S. soil was the Fort Lauderdale Airport shooting done by Esteban Ruiz Santiago, an American.

“I think it was unfair seeing as he targeted nations, and it worried me because my family is from Iran,” Minasian said. “I know my uncle visited Iran during the ban and we were all scared he would be held.”

Recently, the president revised the ban, and it will now block the issuance of new visas and names six of the seven countries excluding Iraq. Syrians will now have a 120-day freeze requiring review, and the new order exempts residents/visa cardholders. This order took effect on March 16. “Luckily, my family and I weren’t affected by his travel ban, but I personally have gone to some protests at the airport,” said senior Marah Hasan. “I’m amazed by the amount of support everyone was sympathizing for Muslims because it’s apparent that this decision was a direct attack on Muslims.”

These concerns of stricter immigration laws also troubled the Latino community. In a Pew Research Center survey, approximately 41 percent of Hispanics “have serious concerns about their place in America”

A few issues raised by this group regard the comments Trump made during his campaign. For example, calling Mexicans “rapists,” declaring his intentions to deport 11 million undocumented immigrants, and his desire to build a wall that Trump says Mexico will pay for (although the President of Mexico has said they will not).

“People have become so bold since Trump became president. Sometimes when I go places with my friends, who are all Mexican, like me, we used to get dirty looks from people,” said a Glendale High School senior who wished to remain anonymous. “They thought we were gangbangers or something. Now they aren’t afraid to tell us what we think. The other day, when I was at the store, some lady told my brother and I to go back to where we came from. We were just minding our own business, not doing anything to bother her. It’s really sad.”

If we unite together and stand up for what we believe in, we can keep Trump from taking away our rights and the rights of other human beings.”

Fearing his intentions, Los Angeles students arranged a student walkout on Nov. 14. They stated that their protest was against Trump’s call for the mass deportation of illegal immigrants, the construction of the wall, and the repeal of the Affordable Care Act (which failed to materialize in the Republican Party’s first effort to do so last month).

Amongst that fear of repealing Obama’s executive orders was the fear of overturning orders that protect the LGBTQ community’s rights. Pres. Trump appointed an anti-LGBTQ activist, Roger Severino, as the Director of the Office for Civil Rights at the Department of Health and Human Services. Although no new changes have been made that affect their rights, seeing the long list of extreme right-wing appointees signals the potential threat the community may face.

CSUN junior Joseph Saldana believes that this threat can be combatted through perseverance. “If we unite together and stand up for what we believe in, we can keep Trump from taking away our rights and the rights of other human beings. We may have lost the battle, the 2016 presidential election, but we will win the war,” Saldana said.