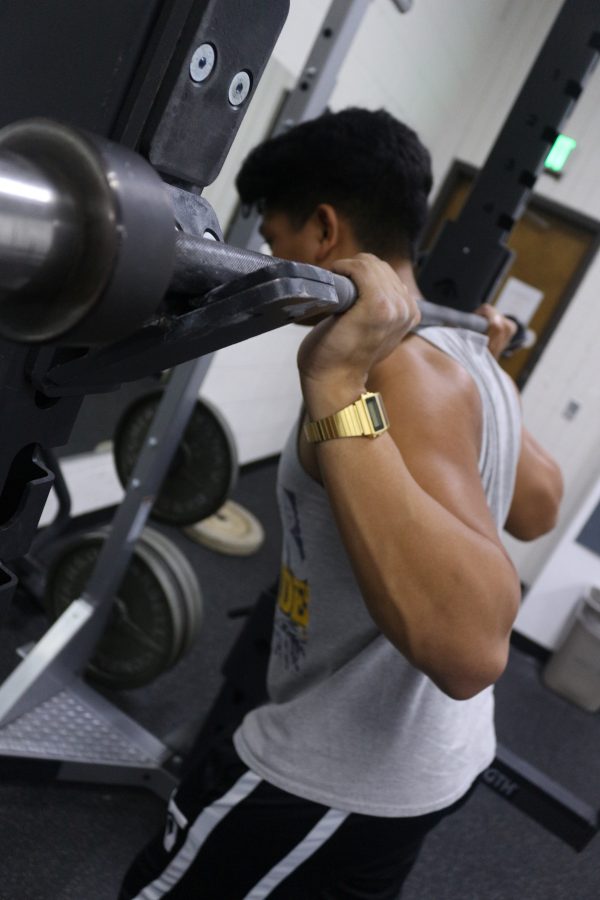 Senior James Tumbucon sets up for warmup squats with an empty barbell at the Glendale YMCA.

“I like weightlifting because I like being strong,” said senior Narvik Mousamoghaddam. Mousamoghaddam’s proudest lift is a deadlift (lift off the floor) of a 505-pound barbell. He has also squatted more than 300 pounds and bench pressed more than 200, and his lifts continue to rise. “I go to the gym almost every day for 1.5-2 hours, and when I don’t I usually train with my weights at home,” said Mousamoghaddam.

Mousamoghaddam’s physical activity is certainly an outlier among Americans. Based on DHSS data, only 1 in 3 American children ages 6-17 are physically active every day. Their guidelines recommend that youth do at least 60 minutes of exercise daily. In 2015, only 55.3 million Americans, or about 1 in 6, belonged to a health club, gym or fitness center, according to the International Health, Racquet & Sportsclub Association. Still, numbers have increased 33 percent from 2005, when only 41.3 million Americans had a gym membership.

Weight lifting provides a myriad of health benefits: aiding in fat loss, improving bone density, increasing muscle mass, improving mood, relieving stress, preventing diseases like arthritis, and reducing blood pressure, among other things. “The way I see it, I’m an adolescent. I have plenty of free time, and I’m at the peak of my testosterone levels. Why not lift weights?” said senior Leo Issagholian, who goes to the gym most days of the week. “I was quite chubby growing up, and now, after two years at the gym, I’m much leaner and stronger.”

It’s often believed that weight training is unsafe for youths, but credible organizations like the American College of Sports Medicine (ACSM) and the American Academy of Pediatrics (AAP) report that weight training has no risks “greater than other sports and activities in which children regularly participate,” and advocate that children participate in it. In fact, in a 1994 study of adolescent sports published in the Journal of Strength & Conditioning Research, weight training and the sport of weightlifting were the safest activities, with injury rates of .0035 and 0.0017 per 100 hours respectively. The most dangerous sport was soccer, with 6.2 injuries per 100 hours.

Mousamoghaddam feels this evidence corroborates his personal experience. “All my injuries are from football, where I destroyed my entire body, especially my knees. Weight lifting never did anything but help me recover,” he said. “With proper warmup, stretching and equipment, injury is virtually impossible. And pain is not injury.”

Other common concerns about adolescent weightlifting include fears that the adolescents’ growth would be stunted. The ACSM refutes this myth too, stating that there is “no current evidence to indicate a decrease in stature” in children who lift weights in a safe environment. Neither has there been evidence of a “growth plate fracture” from “any research study that was competently supervised and appropriately designed.” Still, the myth prevails, keeping some teens out of the gym.

Clark P.E. teacher Christian Axelgard, who has his students lift weights, sees a place for personal lifting regimes among adolescents. “One thing a lot of people don’t know is that lifting weights is a great way to lose weight,” said Axelgard. “However, as in anything you do, you need to have an actual goal when lifting. What do you want to achieve? And do it with a partner, not by yourself. You can challenge them, and they can challenge you.”

Price-wise, lifting weights at a gym is a relatively cheap way to stay fit and build muscle. A membership at the new Glendale LA Fitness, where many Clark students train, costs $20 per month with a $99 initiation fee. That’s the lower end of the general price range around Glendale, which is about $20-$35/month. By comparison, MMA classes twice a week at Glendale Fighting Club cost $130 a month.

However, the best deals in the Glendale area are gone as of late. The Glendale World Gym, which closed last November, charged only $10/month. Burbank Athletic Club has raised its rates from $10/month to $35/month for its standard membership. “I lost motivation and stopped going to the gym, and by the time I was sick of getting fatter the rates were too expensive,” said Hoover High School junior Arvin Baregian.

Starting an exercise program is difficult, and following through is even more difficult. Most Clark students who claim to go to the gym report periods of lethargy. “I get too much homework one day and don’t get to go the gym, and then I won’t go for two weeks,” said senior Melanie Kasparian.

In fact, a 2009 study in the International Journal of Sport and Exercise Psychology reported that half the people who start an exercise program quit in the first six months. Only half of existing gym members go more than 100 times a year, the equivalent of just under two days a week. According to Stacey Smith at NPR, gyms set their business model around most of their members not showing up. Planet Fitness, for example, has an average of 6500 members per gym and a capacity of 300 members. “If you are not going to the gym, you are actually the gym’s best customer,” Smith said.

Apps are often a useful tool to keep people motivated and consistent. The MyFitnessPal app, used by seniors James Tumbucon and Narvik Mousamoghaddam, allow users to log and track their diet, exercise and weight. Its most useful feature is its massive database of nutrition data, containing calorie and macronutrient data for over 2 million foods. Users can track their caloric intake by inputting their meals, and the app creates a daily calorie goal for users based on their weight goals and personal data like height, weight and age.

“MyFitnessPal basically turns weight loss into a science,” Tumbucon said. “I use my food scale religiously to ensure that I’m getting just enough calories that I’ll lose weight, but not starve.”