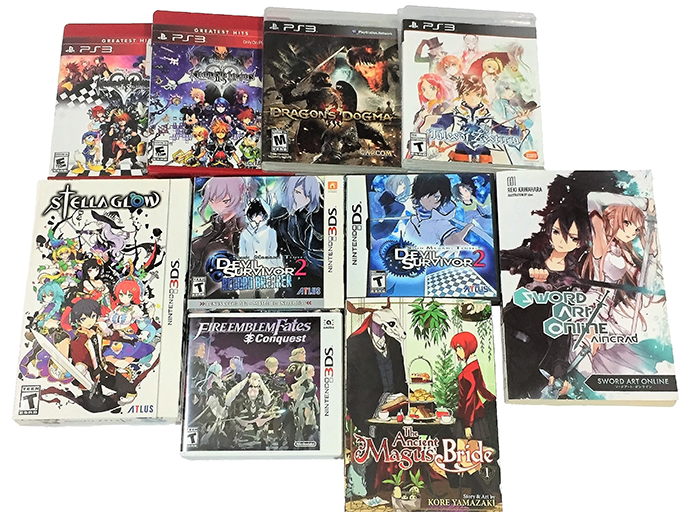 An assortment of localized games, manga, and novel.

“Sometimes I’m surprised that the stuff I play and read weren’t originally made in English,” said junior Patricia Cardeno. “It’s hard to notice which app’s been translated and what hasn’t lately.”

Cardeno isn’t the only one who’s used media that doesn’t originate from an English-speaking country. In the 21st century, there’s been a rise in translated content from around the world. Naturally, content from foreign countries have been translated into English before, but with the ease of access the internet provides and some countries’ attempts in sharing their culture with the world, a multitude of media from various nations have been translated.

According to DCU Language Services, the top languages requested to be translated are Irish, French, German, Spanish, Italian and other European-based languages. However, in recent times, languages from other nations have been gaining a more prominent presence in the United States. Some languages that have grown in translated products come from Japan, Korea, and China. These Asian countries have published much of their culture in media.

Japan exports anime, one of its major cultural productions, in the global market. The popular production of anime is usually seen in animation. Some of these series have been steamed by well known providers such as Cartoon Network, Disney XD, Nickelodeon, Netflix and Hulu. A title that almost everyone knows is Dragon Ball Z, an iconic anime both in Japan and in the U.S.

In recent times Japan has spread their anime export to games, comics and novels. The latter two are usually adapted into the animations streamed in Japan and sometimes the U.S. They have had a rising presence in America, as evidenced by the manga section in Barnes & Noble.

In particular, many Japanese games have been brought to the U.S. Pokemon Go is an app game that was first released in Japan before its various translated releases were made open to many parts of the world. In fact, many other game companies from Japan have been localizing their products, including Atlus, Game Freak, Sega, Nintendo and Namco.

Square Enix, a Japanese game studio known for its console games, has made classic titles like Final Fantasy and Kingdom Hearts, and has a multitude of app games available for both iPhone and Android. “Most of the apps I use are translated from Japanese to English,” said junior Janine Porras. ”Differences between those apps and English made apps is the art. Depending on the story of the game, I can really notice the cultural difference compared to games made in the West.”

However, there’s a limit to how much production can be translated, approved for overseas market and distributed. As such, fans have taken it upon themselves to translate some of Japan’s productions, specifically anime, that had previously no chance of making it to the states. At what first started as individuals translating and putting subtitles at their own discretion, has grown into various web-based groups and organizations that are dedicated to these translations. The more prominent companies are Crunchyroll, Dasuki and Funimation. “I use these sites all the time to watch series I’ve been keeping up with,” Cardeno said. “Crunchyroll has manga now too, which is pretty cool.”

While the animations and comics have a notable amount of U.S. based distributors, it’s light novels that are slowly gaining more attention. Light novels are fictional, Japanese novels akin to young adult novels in the U.S.. The only well known distributor of light novels is Seven Seas Entertainment, whose primary distributed products are manga already. In light of that fact, numerous nonprofit translators have taken it upon themselves to translate various series. However, unlike the muddled multitude of anime sources, light novel and web novel translations have been compiled into websites like Baka-Tsuki, which host 334 works being translated into English, and Novel Updates, a detailed list of what’s being translated, who’s translating, and where the translations are being hosted. “I got into the novels of some of the anime series I watch,” said sophomore Justin Gonzales. “There is a lot to read online.”

Novel Updates also hosts translations of Chinese novels, another foreign media with a growing presence in the internet. These novels are usually longer than Japanese novels. According to Novel Updates, I Shall Seal the Heavens only has 1300 out of 1616 total chapters translated by the dedicated translation group, Wuxiaworld. Granted, individual chapters are shorter than the average young adult novel chapter, ranging from 500 to 1000 words per chapter, but the sheer amount of chapters accumulates that novel’s total word average into the hundred thousands. Taking into consideration the difficulty of accurately translating foreign languages to English while maintaining figurative language, translation groups like Wuxiaworld are well appreciated by readers online.

While Japan and China have their animes and novels, Korea has made itself prominent on a global scale through Korean pop and drama, also known as KPop and KDrama. Both media have also been taken in by translators. VLive provides Kpop content to English speaking viewers, hosting videos and livestreams that sometimes even have English subtitles. On YouTube, fan translations of Kpop groups can be found with just a simple search. Bangtan Subs is a dedicated fan translation channel specifically for the Kpop group BTS.

KDrama, like anime, have various U.S. distributors that provide to American fans. DramaFever and Viki, similar to Crunchyroll, provide subtitled KDramas and other Korean-based shows to English speakers. They also host other dramas from Taiwan, Malaysia, Indonesia, Singapore, and more. “I really appreciate websites like these,” said junior Melanie Mesropian. “They let me watch all the series I love and find new shows to fall in love with. With the internet, we’re not restricted to only English media, but have access to the world.”