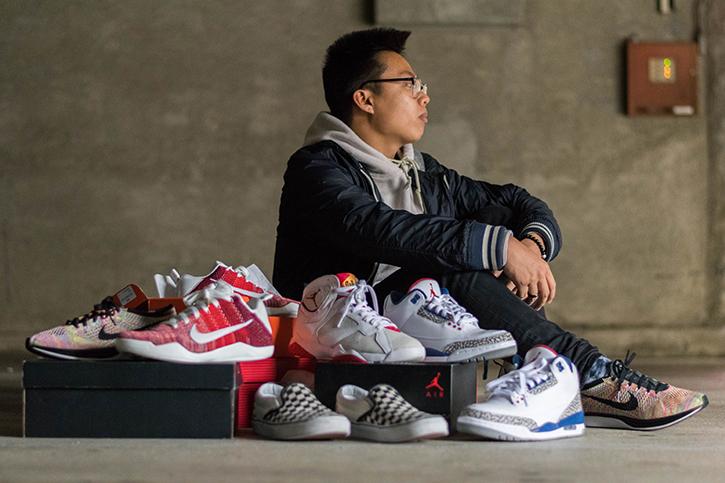 Sneaker Culture in the modern world

They stand in seemingly endless lines in the scorching heat and in the bitter cold to buy the newest kicks, light up like little kids when they finally get their hands on the sneakers with that certain colorway, and treat their shoes the same way a parent would their child. These sneaker enthusiasts are known as “Sneakerheads,” and to them, shoes are more than just the leather, rubber and plastic that make up the footwear.

Originating in the 1980s, the birth of the sneakerhead can be associated with the introduction of Michael Jordan’s highly influential line of basketball shoes in 1985 and the prosperity of hip-hop and the use of sneakers as symbols of prestige and prominence in the Eastern and Western coasts by artists. Today, many outstanding rappers have a signature sneaker they wear, including Kendrick Lamar, who displays the Ventilator line of Puma shoes; Wiz Khalifa representing the very popular Chuck Taylor’s by Converse; and Kanye West, who wears the shoes from his collaboration with Adidas, the Adidas Yeezy Boosts.

Some Clark Magnet High School students have also embraced the sneakerhead culture. “I’ve been collecting sneakers since I was 8,” said Clark junior John Lising. “I have a few friends who mostly buy and sell, but I love buying shoes and having an assortment of my favorite sneakers.” Lising also said he bases his outfits and shoes for his own comfort and fit, noting that “unlike other sneakerheads, I don’t put too much time on my clothing and shoes. I just wear whatever I want and what I’m comfortable in.”

Now, in 2017, this sneaker culture and the subcultures within it are still prevalent throughout the states, and have even expanded internationally, reportedly having an avid collector fan base in major foreign cities, including: London, Tokyo, Toronto, Paris, Berlin, and Barcelona, according to Complex.

The sneaker collecting industry is both a highly lucrative and influential business, with shops of all sizes sprawled throughout Downtown Los Angeles. and collectors seeking the latest in-style sneakers to purchase. Social media also plays an active role in shining light onto the sneaker culture. As of February 2017, Instagram’s most popular sneaker news and media page, @SneakerNews had a following of almost 6 million users, and @ComplexSneakers and @SneakersAddictCom had a combined following of 500,000 users.

Due to its vast influence and reach, collecting sneakers has become part of the lives of both children, teens and adults. Nick Aro, a junior at Clark Magnet, and an active 16-year-old sneakerhead, said that he was introduced into the sneaker collecting scene through his interest in basketball and the shoes basketball players wore, adding that the addition of social media was a major factor in his induction to the scene. “I went to my first sneaker convention in the summer of 2012, where I bought my first pair of Retro Jordans, the Jordan 3 Infrared,” he said.

Aro compared collecting sneakers to something many did as children — gathering Pokémon cards to compare and talk about with to friends. “We get older but still hold onto things we did as kids, our hobbies just evolve,” he said.

Another devoted sneakerhead is Conrad Pruitt, an English teacher at Clark Magnet High, who just like Lising and Aro, began collecting sneakers at a young age. He described a chunk of his life where he lost interest in collecting sneakers, but had his interest rekindled when “my wife bought me a pair of $200 basketball shoes, and I felt what $200 sneakers felt like.”

Pruitt also said that unlike many collectors who buy shoes and store them and only wear them on occasion, he actually uses the sneakers he purchases for playing basketball, and believes they offer a boost to his performance. “I can definitely feel a difference when I wear my Lebron 11’s and Kobe 9’s when I’m playing basketball,” adding that he certainly believes he will be collecting sneakers in the future.

The sneaker market is a highly profitable market, with a reported $17.2 billion in sales in 2015 according to Forbes, which estimates that the industry will grow and reach $220.2 billion in value by the year 2020. Along with major sneakers companies like Nike having sponsorships with high profile basketball players, including Kyrie Irving and Lebron James of the Cleveland Cavaliers, and Kevin Durant of the Golden State Warriors, the sneaker industry will surely continue to grow.