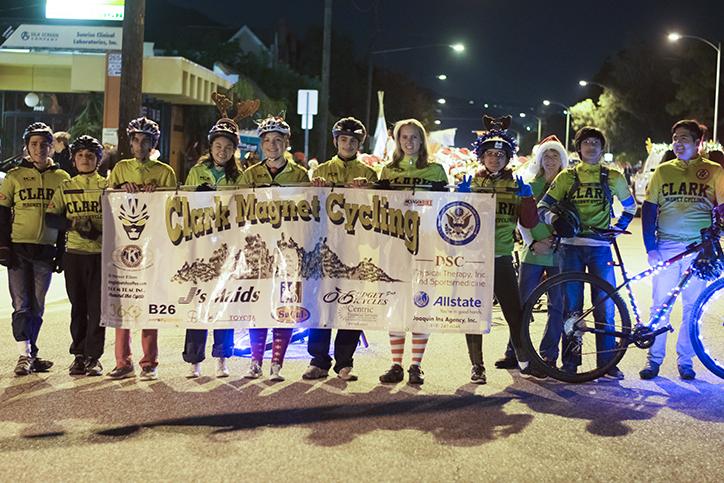 On Dec. 3, Robotics, Bike Club and Relay for Life joined the Montrose Christmas Parade. During the parade the three groups walked through the streets of Montrose as people from the community watched.

The robotics team spent days before working on decorating the three robots that participated. “Everyone was shaking not only because of the cold weather, but also the rush of putting smiles on people’s faces,” said senior Anthony Karroum.

Senior Nanor Asadourian also walked with the rest of her team, enjoying the happy faces of the little kids as the robotics team walked along the parade route.

“It was nice walking along seeing the little kids excited even though the holidays aren’t that close yet,” Asadourian said. “The best part of the parade was when we were chanting. Our usual chant is, ‘When I say circuit you say breaker!’ However, we added a twist with to match with the holiday, so we said, ‘When I say “Merry” you say “Christmas!”’”

Sophomore Michael O’Gara was one of the people driving the robots in the Christmas parade. “Driving it was fun and the first time I drove a 696 robot,” O’Gara said. “It was kind of stressful because I was worried I would mess up or that my robot would have an issue during the parade as well.”

O’Gara drove Snapdragon.“ I was just surprised that mine didn’t have any issues,” he said. “The best part of the parade was passing by the announcers. Last year my teammates had to carry the robots when they passed the announcers.”

The robotics team walked during the parade. However, out of the three robots that participated, Snapdragon, the robot, was the only one that survived the entire parade.

Bike Club also joined the parade.They had also prepped for the Montrose parade at the home of freshman Allyson McCullough, one of the team members.

The members also spent hours in Clark’s student parking lot, learning how to ride their bikes slowly for the parade. On the day of the Christmas parade, they went to McCullough’s house to relax and decorate their bikes.

“This was the first time that people from Clark came to my house,” McCullough said. “We had to clean our house which was really hard but at the end it was worth it. The hardest part for the Christmas parade, though, was decorating our bikes.”

McCullough said she enjoyed the parade with her teammates and saying “Merry Christmas!” to those who were watching.

Another team member, sophomore Samantha Dominguez, also joined in for the Christmas parade with Bike Club.

“Riding through Montrose was really fun and exciting,” Dominguez said. “It was an overall fun experience to hang out with some of my closest friends as we got to show our Christmas pride.”

Relay for Life Club also participated. However, the Relay for Life club did not have the event go smoothly as Clark’s other groups. Sophomore Kioko Taylor said that the event was challenging for her and her two fellow club members.

“There were only three of us plus my mother,” Taylor said. “We didn’t have one of the committee members come and bring the poster we needed. We grabbed one of my closest friend during the parade to bring more people to the group. However, overall I had a lot of fun with all my friends and just seeing the kids smiled motivated the whole group.”

The parade runs along Honolulu Avenue and is a place for many groups to introduce themselves and show what they do throughout the year, or show what they have done so far for the year. It is also a way for many people in the community to get involved and to get into the Christmas spirit.

Joselyn Bille, a junior who watched the parade, said of the experience: “It’s a place for the community to see the wonderful schools get together to bring Christmas joy.”