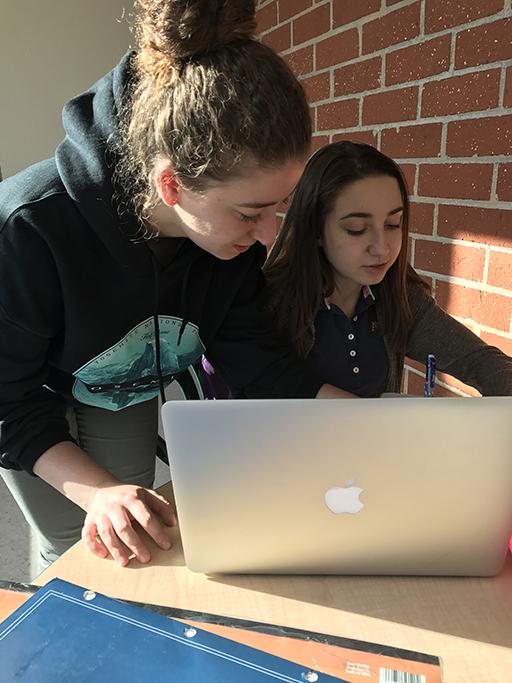 Seniors Elizabeth Minasian and Ani Petrosyan study together for the upcoming AP exams.

Academic competition is a breeding ground for success and stress

“I have noticed that more and more students are being placed in higher level classes,” said senior Anna Ghazaryan. “Many freshmen can be in a class that is designated for junior levels.” In Ghazaryan’s view, this shows the rise of competition among students striving for success in academics. Students don’t just want to be successful at their own level, but they also want to go beyond to stand out from the crowd in order to catch the attention of colleges.

Most of the time, competition arises from the fact that colleges are competitive and only those at the top will get a spot. According to data from the Digest of Education Statistics, “from 1992 to 2004, the number of applicants to four-year colleges grew from 1.19 million to 1.71 million students, an increase of 44 percent,” verifying the rising numbers of applicants. This similar pattern is continued to this day, leading to more competition among students not only in their senior year of high school, but also in every school year.

Academic competition holds many great advantages, but at the same time may result in disadvantages for some students. For some, competition may encourage students to challenge themselves and lead to better results. However, for other students, the concept of competition can lead to disappointment and a feeling of not being able to meet the standards. In addition, the unhealthy competition adds to the already overwhelming amount of stress that students have to endure.

“There needs to be a healthy competition among students,” said mathematics teacher Amir Ghavam, “but a lot of times, competition only leads to stress, anxiety and sleepless nights.” According to Ghavam, students start doubting themselves because they start to compare themselves with others and put each other on a pedestal based on grade rankings, instead of trying to achieve their own person best.

John Schindler, co-director of the Alliance for the Study of School Climate, writes about competition in his book Transformative Classroom Management. In one of the chapters, Schindler describes the negative impacts that competition can have on students by demonstrating how students no longer read books for fun, but rather lie about reading to inflate their intellectual reputation among their peers. Schindler writes that If the competition prolongs, academic activities like reading “become less fun and increasingly more of a burden.”

“[Competition is] good to a certain extent because it creates a better sense of ambition in a student, to be the best that they can be,” said senior Seiran Aleksanyan. However, he also believes that competition can turn out be counterproductive if students try to do whatever is necessary in order to achieve good results, which can be in the form of cheating or trampling over other students.

On  the other hand, Schindler writes that when students are offered a reward for the amount of effort that they put into the activity, the quality as well as the effort of their work increases greatly. Teachers and professors are able to extract  “the intrinsic motivation out of the situation by introducing an extrinsic reward.” Therefore, offering multiple students the same valuable reward

grants them an inner drive to work that much harder to achieve that reward, which may be a scholarship or admission to a specific university.

“I think competition helps to strengthen skills and retain more information along with expanding one’s own knowledge,” said senior Sevada Khashadoorian. Senior Nareh Abramian added that there needs to be friendly competition among students to help each other academically rather than bring each other down.

The increase in competition is also evident in how many students get accepted to elite schools. According to biology teacher Virginia Benzer, there are more factors that count today for getting accepted to a college of desire. “There was very limited financial aid when I was applying to schools,” Benzer said. More students are now able apply and  go to universities with the help of financial aid, which increases the number of students that might want to go to the same school, hence increasing the competition.

According to Benzer, there were not as many AP classes when she was applying for schools. These universities considered the grade point average as the major factor when accepting students instead of evaluating the number of AP classes taken. ”Today, students have to find other ways to stand out, such as volunteering and participating in different activities,” Benzer said.