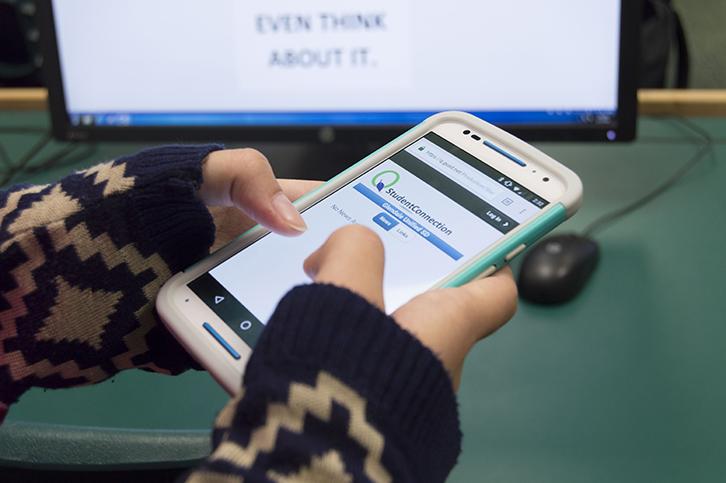 Students always want to check their grades as they are often available online.

Electronic devices — should they be used during school hours?

According to a 2016 survey from Common Sense Media, 50 percent of students feel “addicted” to their phones. “I would definitely feel weird and different if I didn’t have a phone,” said senior Anik Boyadzhyan.

As cellphones become a greater part in our everyday lives, the long disputed argument of using phones during school hours gains more and more momentum. According to the Glendale Unified School District BP 5131 Board Policy, students are allowed to possess electronic devices — mobile phones, smart phones, laptops, tablets or other forms of communication devices — at school. Students are only allowed to use these devices during emergencies or when instructed to do so by an administrator. In any other situation, the devices must be turned off or on silent during school hours.

As technology continues to evolve, school district policy may change as well. According to Assistant Superintendent Jacqueline Perez, the GUSD may make some changes to the current policy. “The California School Board Association (CSBA) recommends updates to board policies, and we follow those accordingly,” wrote Perez via email.

“Technology is fast becoming an integral tool in delivering instruction and supporting students’ learning in the classroom. We are currently in the process of updating board policies, including our acceptable use of cell phone and electronic devices this year.”

The potential for modification in school board policy might be because cellphones are used so frequently in daily life. “I often have to call and text my parents about important reminders and other problems that need to be communicated with them as soon as possible,” said senior Areen Andreasian. “It’s a crucial part of our lives.”

Students not only turn in assignments by hand but also digitally. Websites and apps like Turnitin.com and Google Classroom increase the use of electronic devices. Clearly, schools rely heavily on technology and thus increase in students the need to use electronic devices.

This escalation demonstrates why some argue that parts of the District policies should be modified to allow some access to electronic devices during school hours. “I am in favor of students having access to cell phones during lunch and snack so long as they are not doing anything inappropriate,” said math teacher Amir Ghavam.

Because grades play an important part in students’ lives and because they are available online, checking grades could be categorized as an appropriate use of cellphones during school hours. “Grades are really important to me, and I always want to be updated,” Boyadzhyan said. “But because of the rules, I can’t check as much as I want to, and so I feel nervous all the time.”

As grades are available online, so too is the daily bulletin that informs students about clubs, scholarships, important dates and events and lunch programs. Clark’s bulletin plays a vital part in updating students about school activities. Because the bulletin is available digitally and because some teachers do not read it during class, students can stay informed about the daily news by viewing the bulletin on their phones rather than picking up a paper copy in the main office.

“I always want to check the bulletin because it offers a lot of information that I wouldn’t have known about,” Andreassian said.

While most students think that cell phone use should be allowed in school, Clark administrators think otherwise. “We adhere to a pretty strict policy,”said Assistant Principal Armene Mkrtchian. “As far as punishing students for using them, I strongly follow the Clark policy and will take them away if I see them out.”

While many students and some staff may find benefits to using cell phones in school, others argue that cellphones promote cheating and other negative behaviors. In order to lessen the likelihood of cheating, some teachers collect all electronic devices or have policies that make students put backpacks in the back of the room during testing.

The banning of cell phones can also be justified with the existence of social media. Not only does social media serve as a distraction for some, but students might invade other students’ privacy by taking pictures of them and posting them online, thus giving administrators more reason to restrict phone use on campus. “We want to protect the rights and privacy of other students,” Mkrtchian said. “More importantly, we want to focus on instruction. Learning and direct socialization are interfered [with] when students are on their phones.”

“I think having phones during school is nothing but a distraction,” agrees senior and

GUSD student board member Arvin Sarkissian. “The school’s staff and administration are already incredibly lenient about using phones out of class, during snack and lunch. The policy is completely fair and it would be a mistake to change it.”