Testing is based on personal preference 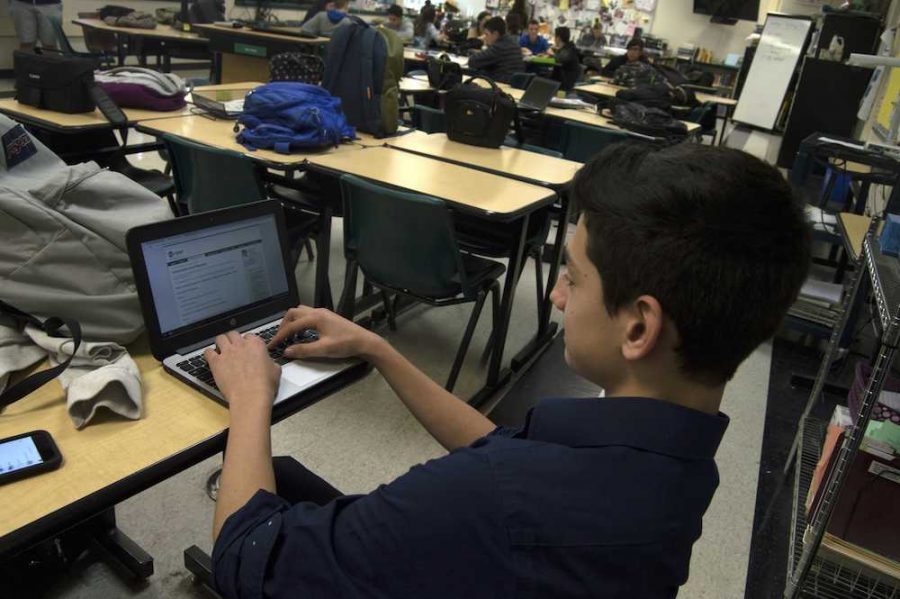 Jack Maruyama looking over the standards for the CAASPP.

Sophomore Roni Amirian said that he would much rather take the online California Assessment of Student Performance and Progress (CAASPP) versus a written test because of the many benefits the CAASPP has to offer. “I don’t like the fact that we aren’t allowed to go back to the previous question once we submit our answer when taking most computerized tests, but the CAASPP gives you the opportunity to reconsider your answer,”Amirian said.

“Testing has been much easier because of the CAASPP, along with a couple of other tests,” said associate principal Lena Kortoshian. “They are much more manageable and effortless to set up and start.” Sophomore Aleks Melkumyan said that he took the CAASPP interim this year, and he was really intrigued by the new and improved way of testing. “I never liked bubbling in my answers, so I find that computerized testing takes up less time,” Melkumyan said.

According to the California Department of Education, the CAASPP has allowed students to use technology in order to familiarize themselves with the new and improved testing. “Even though I haven’t taken the CAASPP this year, it’s a very good idea because it’s more convenient for the staff and students,” said senior Marine Tahmazyan.

As of 2014, no California State Testing was required due to the CAASPP. The CAASPP was founded in 2014 and is a requirement for high school graduation.

According to the Benicia Unified School District, computerized testing is significant because it prepares students for college level courses. Personalized letters describing the student’s performance will be sent to students after taking the CAASPP.

According to Test Prep Review, some computerized tests have the ability to increase the difficulty level of each question as one gets them right, which gives students the opportunity to test their abilities, whereas non computerized tests cannot adapt to such standards. The CAASPP, for example, has the advantage of including informative videos and audios to help students answer questions, while paper-based tests only include written explanations.

The problem with computerized testing is that computers cannot do much more than grade multiple choice tests, but it makes things easier for both the students and staff. “Since our school has an emphasis on technology, many of our students are comfortable with using Chromebooks for testing purposes,” Kortoshian said. Assistant Principal Dr. Brian Landisi said that students are comfortable with the latest technology because of the computer classes that Clark Magnet High School has to offer. “All of our students are required to take tech lit classes, in order to have experience with basic technology,” Landisi said.

According to EdSource, Gov Jerry Brown agreed to stop CST testing  in 2013 even though this test was given for 15 years. Students in grades 5, 8, and 10 will be the only ones who will be taking the CSTs for science. 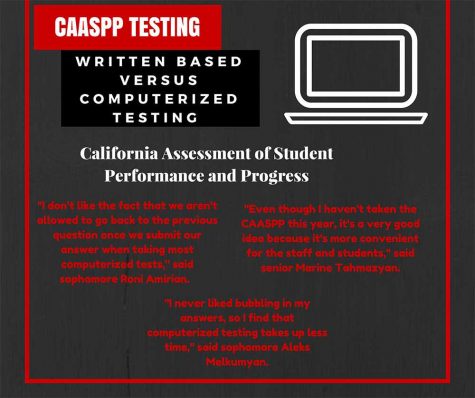 In some cases, computerized testing has its downsides because it can affect students scores. As stated in Education Week, the standard scores for students in the 8th grade who were taking tests like the CAASPP received less points versus the ones who took the test on paper. According to studies at Princeton in 2004, psychologists Garland and Noyes came to the realization that there is a very minor distinction with the speed of reading whether it is on a screen, or on paper. Princeton studies have shown that reading is much more challenging to do on a screen.

Not all students like the changes that have been made. “I feel more comfortable with written-based tests because I don’t have to worry about the time limit, or any type of technological problem,” said junior Talin Tarverdian.