Using phones while walking: Is it really harmless?

Phones distraction causes danger in more ways than one 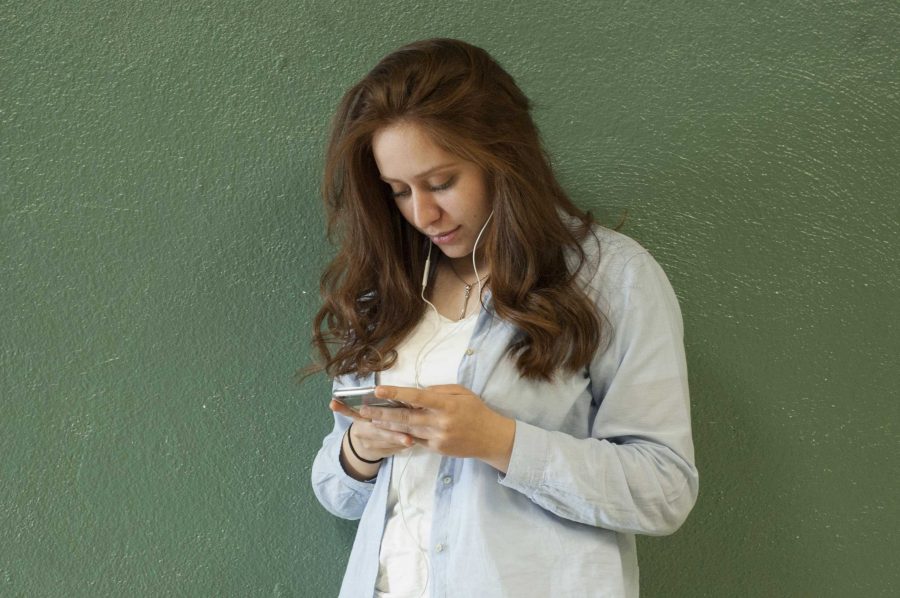 Students can often get distracted by listening to music while walking.

Junior Kristina Baghramyan said she was walking home alone during the day along Colorado Street in Glendale, listening to music, and she completely zoned out when she almost got into an accident. A car had stopped right in front of her as she was crossing the street, with the driver honking repeatedly. After this close call, Baghramyan said that she knows better than to get distracted by her phone.

“I saw my whole life flash before my eyes, seemed like the driver was just as scared as I was,” Baghramyan said. “I was terrified and I never even told my mom. She would never let me walk alone outside again. She would be crazy disappointed in me, [be]cause it was completely my fault.”

Baghramyan’s story is not uncommon, though many are not as fortunate. According to Safe Kids, a teen is injured or killed every hour after being hit by a car in the United States. Forty percent of teens have been hit or nearly hit by a vehicle. Among this 40 percent, 47 percent claimed to have been listening to music while crossing the street and 38 percent said they were using their phones in means of texting or calling.

Even so, many believe using their phones can be safe if used under the right circumstances. “It depends on the situation,” said junior Nareh Abramian. “If I’m on a busy street with lots of people, I obviously wouldn’t put both earphones on and go on listening to loud music and texting.”

Many students interviewed for this story share similar mindsets to Abramian, as they believe as long as they do not clearly see potential danger before they go on their phones or blast their music through earphones, they will think doing so is completely reasonable.

“You can’t fully acknowledge your surroundings when you’re busy staring at your phones or listening to music and unable to hear,” said junior Aren Bedrousian. “I always make sure I have only one earphone on, the music is under the three-fourths mark, and that I look both ways while crossing the street.” He said that his life is in his own hands not the hands of the drivers.

Others believe since pedestrians have the right of way, they can do whatever they please and if that means getting sucked into their phones so be it. “Until I cause significant damage, I’ll continue to be a danger to myself and society,” said junior Seiran Aleksanyan. He said that cars must stop for pedestrians. Aleksanyan said he believes that if drivers don’t stop, they are responsible, even if the pedestrians are distracted and unaware of their surroundings.

According to the American Academy of Orthopaedic Surgeons (AAOS), injuries occurring to pedestrians using their phones have more than doubled since 2004. And many teenagers don’t fully appreciate the chances for injury or death. “A car is a deadly weapon,” said junior Esther Barahona. “It’s not okay for you to text while driving, but when you text while walking you should be safe.”

Barahona is not the only one who thinks this way. “There’s no need to focus when you’re walking, but when you’re driving you need to be alert at all times,” said Abramian. Abramian said that this is the reason everyone thinks it’s okay to use their phones while walking but not while driving. Safe Kids discovered that about one in five high school students were distracted by an electronic device when researchers observed more than 34,000 kids crossing the street. Researchers also surveyed about 2,400 student pedestrians and found that half of them were using their phones while walking to school and 40 percent listened to music.

Researchers are not the only ones who have noticed how many students use their phones while walking. Clark’s security guard,  Frank Arevalo, said that he sees students not paying attention to their surrounding while walking and crossing New York Ave. in front of school because they’re too busy using their phones almost every day. “Some students are on their phones, crossing without [having] pushed for the light,” Arevalo said. “Others don’t even turn and look to see [if] cars are approaching.”

Arevalo even said that he remembers that one senior girl was crossing the street in front of school,

listening to music, as a school bus approached. He said that the bus was coming down and she paid no attention to that. The bus driver had to stop the bus and he had to yell to stop her. Arevalo also said that after watching students listen to music on headphones and go on their phones while walking, he knows that there is a high chance that one of these days they’ll get into an accident.

Students are not only in danger of being involved in a car accident, but also getting hurt in other ways while using their phones and walking. “There was a student on his phone, in the lunch center, who just walked into one of the pillars out there,” said health teacher Randy Tiffany. Tiffany says that students are completely addicted to their phones and that’s what puts them in danger.