Enlisting into the future

Graduates go through an extensive process to join the military 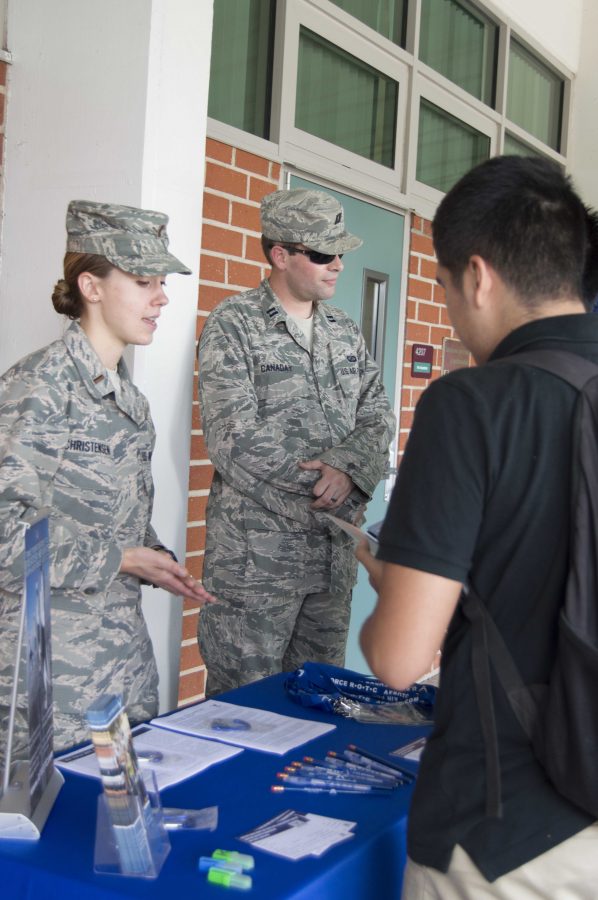 Unlike most seniors who will be applying to the more conventional colleges this fall, Clark Magnet High School senior Levon Gevorkian will try to enroll in West Point Military Academy. “It’s something I’ve always wanted to do,” said Gevorkian, who will be majoring in political science. “I’m the first to join in my family and I want to do something good.”

Joining the military is not a commitment that students have to make immediately after graduating high school; sometimes graduates make this decision later in life. Joel Angle, a Clark alumnus and former executive officer of a military intelligence company, had always been interested in technology, and after studying network engineering upon graduation in June 2001, had a hard time feeling motivated in his classes.

In an email interview, Angle said that he was feeling uncertain about his future until September 11, 2001, which changed everything. Angle, who read about the men and women who ran towards the buildings to rescue people, was inspired by their courage. “I started thinking about joining the military and the more I looked into it, the more I felt it would be something meaningful to do with my life,” Angle said. Angle joined the Army in March 2002.

Joining the military is not as simple as it may seem. According to CNN, nearly a quarter of students who attempt to join the army fail the entrance exam. In a different news article by CNN, studies show that 99 percent of recruits have high school diplomas and people with GEDs are often denied entrance to join the army. Medical conditions disqualify about 35 percent of applicants, prior drug and alcohol involvement disqualify 19 percent, and criminal records disqualify 5 percent.

These tough odds aren’t stopping Gevorkian from enlisting. According to Gevorkian, the military’s structure and different branches captured his attention. “I like the progress made in the ranks,” he said. Though he has participated in training programs and plans on attending West Point after high school, Gevorkian knows how difficult it is to actually get accepted.

The academy overall has a nine percent acceptance rate. In order to get in, Gevorkian first has to take an entrance exam. He then needs two letters of recommendation from members of Congress. Once he’s accepted, he has to train for four years while getting a normal education. “It’s worth it in the end because once you’re in the U.S. Army, you’re an officer.”

The military’s different branches, which are what interested Gevorkian from the beginning, each have different service requirements. According to TodaysMilitary,

the physical demands depend on the branch of service, but generally speaking, potential service members should be in “good physical condition, of appropriate weight and able to pass standard physical screening.” In addition to the physical portion of the entry, recruits must be U.S. citizens or Permanent Resident Aliens.

There is extensive training that recruits have to endure in order to qualify. “I’ve been through a basic training program called ‘encampment,’” Gevorkian said. “New cadets go through ‘hell week’ where they are taught how to dress fast, pay extensive attention to details, fly planes and run.”

For Angle, the academics were easy; it was the lack of sleep and physical demands of training that were hard. “In basic training in 2002 and again in officer candidate school in 2011, I spent several months getting 4-5 hours of sleep a night, exercising several hours a day, taking exams and getting yelled at constantly,” Angle said.

According to an article on military.com, these various fitness programs require recruits with “a high muscle endurance” and those who have a viable “strength to body weight ratio for maneuvering through obstacles and combat conditioning courses.” Recruits must also be mentally tough. These training programs will “push you to your physical limit.” It is dependent on the person’s mental ability on whether or not they can move forward or quit.

“In that kind of environment, everyone gets broken down and many candidates quit,” Angle said, “The one’s who get through learn to reach down deep inside and find something that motivates them to keep their attention on the goal and muscle through the pain and exhaustion. “

High school students who join have multiple scholarship opportunities. According to GoArmy, scholarships are given to students based on “merit and grades,” and not the student’s “financial needs.” According to 2d Lt (second lieutenant) Jenee Christensen, an admissions officer and recruiter who comes to Clark on occasion, about 1200 colleges offer ROTC (Reserve Officers’ Training Corps) scholarships. Some of the benefits with joining the army right after high school include having a job and receiving a salary. According to military.com, more benefits include “health and dental care for you and your family, special deals on home loans, advanced technical and specialty training,” and more.

Angle, who left active duty in 2006, has received multiple educational, health and financial benefits from the military. Specifically, the G.I. Bill helped Angle get through his undergraduate program and almost all of his graduate program. Angle also received a $20,000 scholarship from the National Security Education Program to study Arabic in Egypt. Other benefits that Angle receives include discounted health care, cell phone plans and insurance.

Although high school, graduates receive numerous benefits upon joining the military after graduation, it may not always be the best choice. “If someone does join after high school, I would encourage them to pursue a military occupation that is in line with their long term interests and hold out until they get a duty location or program that interests them,” Angle said. “Once you get to you first duty assignment, you need to be ready to dedicate yourself to that unit, so hopefully it’s the one that you chose.”

Despite all the benefits that comes with joining the military, it may not be best suited for everyone. “I encourage every student to think about what interests them, look at all of the college programs out there and do what is right for the future that they want,” Angle said. “Joining the military is a very big commitment that isn’t right for everybody.”

According to Angle, military life requires significant personal sacrifices that include moving across the world every few years, living a regimented life, working very long hours, possibly being put into harm’s way, and postponing the ability to make choices about your lifestyle. “It is not an easy life,” Angle said. “But I’m positive that it changes most people’s lives for the better, even if they only serve for a few years.”