Clark students speak on their parents' hopes for the future 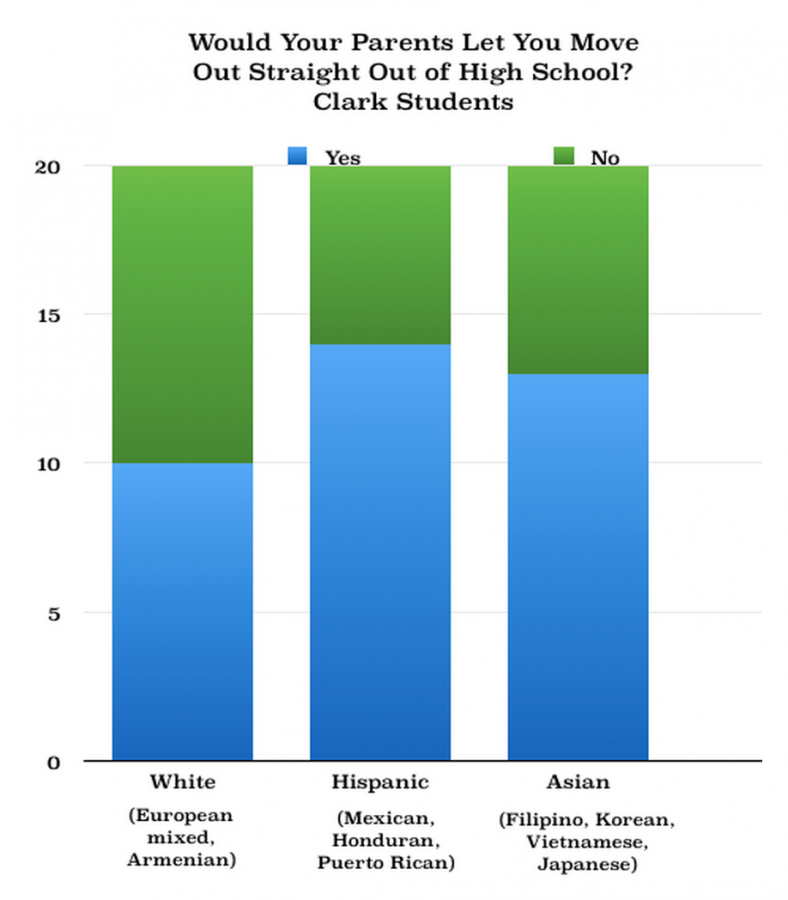 “If you trap a dog in a cage and suddenly let it out, of course it’s going to run loose and do whatever it wants,” said junior Sandra Gadalla, expressing her opposition to some parents’ strict mentality of not letting their child move out of the house right after graduation. “When it’s time, it’s time. They can’t keep me for so long.”

Gadalla said that parents’ decisions do not have to do with their culture as much as it depends on the parents’ natural fear to detach themselves from the child, though a change in their own mentality could occur as a result of exposure to different cultures. “I don’t think it’s culture, just parents in general,” she said. “In Egypt and other conservative countries, there isn’t as much diversity as there is in America, so the same things happen for everyone and kids stay at home whether they like it or not. A lot of people brought up here are more open-minded, so younger generations will have more freedom in terms of that.”

Like Gadalla, senior Jared Ortaliza is against the idea of keeping a child “in a cage.” He believes that one can not truly mature until given the opportunity to fend for himself. “I don’t think you really grow as an adult until you actually are one, independent,” he said. “I feel like when someone wants to try to experience something new, they should be allowed to because it would help them grow as a person.”

Ortaliza also believes that a parent’s decision relies solely on the individual parent, and not the family’s ethnic background, like how his own parents have their unique views unrelated to any “traditional Filipino mentality.”

“[My parents] are fine with me moving, as long as I live around family, like in New York,” Ortaliza said. “I have expressed interest to apply internationally, but they have disapproved.”

Like Ortaliza, senior Christopher Haklar thinks that parents’ decisions to allow their children to move out is specific to those parents’ individual mentalities, just as his own parents would like for him to stay around family when he moves, due to their own fears of Haklar not being able to fend for himself. “They want me to stay around the family because they don’t trust me to take care of myself, but I feel like that’s every parent,” he said.

According to junior Allen Deravanessian, a parent’s decision to deny permission to move out of the house would be unnecessary and hurtful to the parent-child relationship. “Obviously my dad would let me move out,” he said. “It’s a sign of maturity, wanting to live on your own. And allowing your son to do that is a sign of trust. That trust should be there.”

A few students were even surprised to hear that some parents will prohibit their children from moving out of the house upon graduation, believing that it is the parents’ job to support their child, no matter their culture. “It’s not that big a deal, you’re just going to college,” said junior Austin Borusiewicz. “Your parents should let you do what you got to do.”

Similarly, junior William Hunter also said that a parent should be supportive of whatever their child must do to be successful in their educational endeavors. “My parents would let me leave home for college. They’re supportive of anything I do, especially for school,” he said. “But it depends on the parent, not the culture.”

On the contrary, some students believe their ethnic culture greatly impacts their parents’ decision. Sophomore Stephanie Chung said that although she would probably be allowed to leave, ultimately, her father would not be happy about this change due to his cultural values. “My dad might be hesitant. Asians are strict,” she said.

Junior George Bandek thinks that not only is a parent’s ethnic background significant to his decision, but also the gender of the child as well. He said, “With the Armenian race, the boy is more free. To the boys, it’s like ‘You can go,’ but the parents, specifically the dad would want his girl to stay home. I think Armenian dads just love their girls too much to let them leave.”

Clark’s librarian, Susan Newcomer, said that she has also noticed a difference in parents’ decisions depending on their child’s gender. “It’s definitely a gender thing,” she said, “In both cases, male or female, I’ve noticed that the parents would much prefer for their child to go to community college first, and then transfer as juniors to a university. But females definitely have a harder time with the parents making that transition than males do.”

English teacher Narine Tatevossian said that the reason why so many parents are hesitant to let their children move out of home may be because they’re worried the child won’t be able to handle living on their own and may not make the right choices. “It’s good to make decisions on your own because it’ll help you grow and learn about how the world works. But there will be students who aren’t mature enough yet to be on their own and can’t handle it, and their parents should think twice with their decision,” she said. “There are many sides to it.”