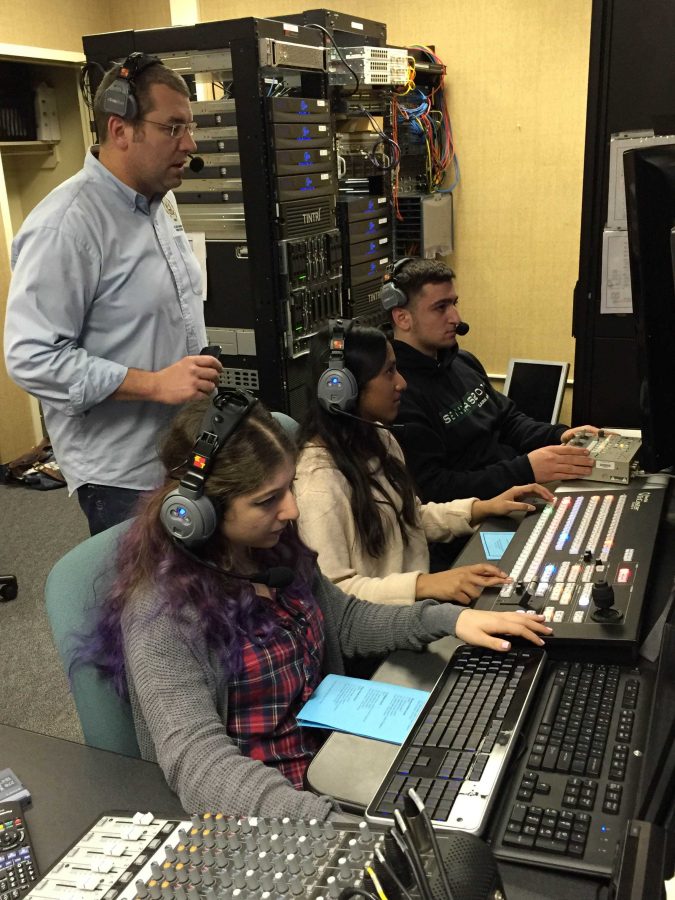 The Glendale Unified School District has their official board meetings every other Tuesday at the district’s main office on Jackson Street in Glendale. To keep Glendale residents updated about the school district, Clark Magnet High School’s cinematography teacher Matt Stroup films the meetings and airs them live on the Glendale education Channel 15 and on AT&T U-Verse 99.

To be able to accomplish this every other week, Stroup recruited two current Clark Magnet High School cinema students, juniors Gor Zalyan and Farah Ali, to help with these productions.

“Mr. Stroup asked me to help him out at the beginning of the school year and I gladly accepted,” Zalyan said. “I have been introduced to many new things with this part-time job and I really enjoy it so far.”

Zalyan’s main responsibility, other than helping to set up, break down and troubleshoot, is to control five different camera feeds going into the Tricaster, which is what Ali controls. The Tricaster is a piece of equipment worth over $15,000 that allows the students to record, edit and switch cameras live for any venue.

“We have a really nice setup inside the district office,” Ali said. “It is very organized which makes our jobs much easier.” Right behind the conference room is a camouflaged entrance to their mini studio. It contains equipment much like the ones utilized by Clark Magnet High School’s cinematography department.

Zalyan and Ali meet with Stroup at the district office one hour before the start of the meeting, which is usually at 5 p.m. They first test all the equipment to prevent a disruption while streaming live. “We check the cameras. They need to be focused and fixed on a subject,” Zalyan said. “Then mics need to be tested to confirm that it is at a volume we can work with, as in they are not too low so no one can hear them and they are not too high to burst out the audience’s eardrums.”

The intensity does not begin until they go live on the air, however. Since many different people talk during these board meetings, the cinematographers need to maintain their focus behind the scenes and prevent any errors from taking place.

Zalyan, Ali and Stroup communicate with intercom headsets and let each other know which camera is live or which needs to be adjusted. Every change they make needs to be a cautious one, since the proceedings are live. If any camera errors take place, everyone watching will witness it.

Zalyan finds some of the board meetings to be amusing, while others are incredibly boring. “When the public speaks to the board members, they sometimes ask ridiculous questions that are just hilarious.” In the end, however, Zalyan keeps his focus on the cameras, not the speakers and that is how he manages to prevent any errors.

Once in a while, however, some distractions do take place during live productions that can possibly cause a moment of panic. Ali told a story from a couple months ago where the live production was almost interrupted due to the fact that she lost focus and got caught off guard. “It was a funny story actually,” Ali laughed as she recalled this moment. “We all have intercom headsets that we use to talk to each other and Mr. Stroup forgot that we could hear him and he made a loud noise randomly and we all jumped up since we didn’t know what that noise was.” Luckily, they were able to continue the production without anything noticeable on screen.

We all have intercom headsets that we use to talk to each other and Mr. Stroup forgot that we could hear him and he made a loud noise randomly and we all jumped up since we didn’t know what that noise was.”

Since the Tricaster is so efficient in producing both green screen and live productions, Stroup purchased another one for the classroom a couple years back and has taught the basics to all his cinematography students.

Another plus side to the Tricaster is that it is designed to be completely mobile. Last December, Stroup and a group of current students packed up the Tricaster, created a mobile control room and set up in a public area to air the Montrose Christmas Parade live on the Glendale Education Channel.

Motivated by the live production, another group of students recently filmed a play, The Ugly Duckling Princess, at Wilson Middle School; it is scheduled to air sometime in the following weeks, as soon as some minor details are touched up on and a time slot can be filled.

Over the years, Stroup has been able to introduce more of his students the ability to advance in the field of film or entertainment in general, just like how he was able to give Zalyan and Ali the opportunity to work for him and the Glendale Unified School District at the district office. “I feel like the experience I’ve obtained through this job and cinema serves as a platform for me in the future,” said Ali. “I know this will be very useful for me if I decide to continue this career path.”