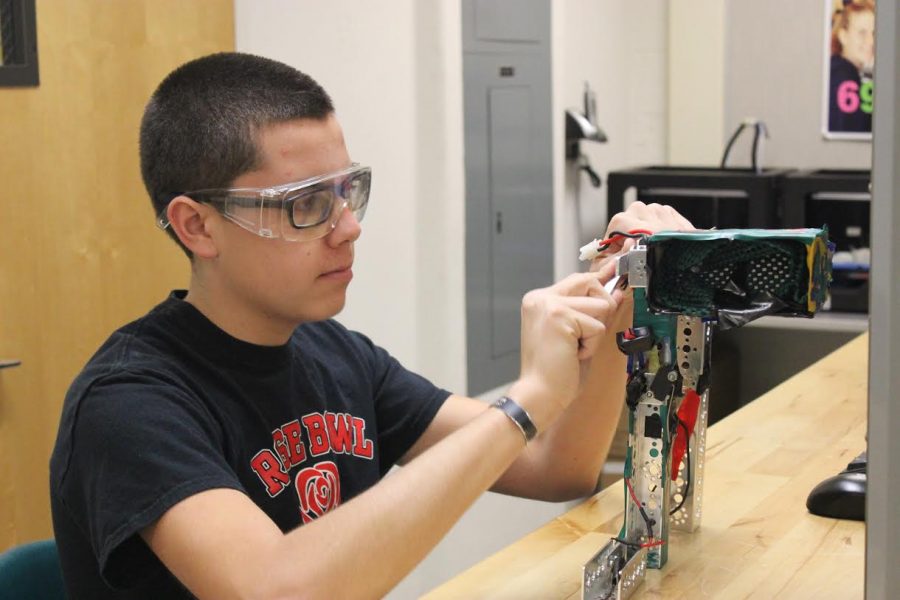 The distant sound of a drill echoes in the air, students huddle around a robot, and the subtle smell of snacks floats through the air on an average day in the engineering room of Clark’s robotics team 696, the Circuit Breakers. Team members finish their snacks, “and then Jack [Nazaryan, Robotics club president,] tells us to get to work,” said senior Joshua Valerio. “And then everyone working that day goes into their respective subgroups.”

Team members work in many subgroups where they learn different skills and perform various tasks that all contribute to the overall manufacturing of their competition robot. Among the various subgroups of the robotics team are the prototype team, which prototypes parts of the robot, and the wiring team, which wires the robot and and its various parts. The robotics team also has subgroups like the Computer Numerical Control (CNC) operators and programmers, who operate and program the CNC. The CNC manufactures the metal parts of the robot after they are designed and prototyped, and is also known as the large machine in the engineering room.

Subgroups working in animation and computer-aided drafting and design (CADD) design parts of the robot to be prototyped, and they use computer programs and their innovative design skills to draft computer models of their robot’s parts. The team also has programmers who create the programs the robot runs, a media and business team, as well as a lathe team which operates the lathe, a machine that turns a big aluminum cylinder, spinning it at high speeds so intricate patterns can be cut into it.

As leader of the prototyping team, Valerio and his team test out different ideas for the robot to complete tasks. “We come up with a strategy for what the robot needs to do to win,” Valerio said.

This robotics season’s challenge requires robots to stack big crates and boxes, and the production of such a robot capable of this requires the various subgroups to learn and work together cohesively. “We have to stack boxes, so we think ‘how can we lift something up?’ Oh, an elevator! So we have people work on building prototypes of the elevator,” Valerio said. “And then after we give the dimensions to the CADD people, they give us dimensions to make a second level prototype, which is the nicer, more accurate prototype.”

“We basically strategize, prototype, strategize, prototype,” said senior Elizabeth Abramian. “And that goes along with each mechanism, the intake, the totes that were making, and something that also pulls trash cans because thats also a thing we have to do.” After multiple strategies, prototypes and designs, the robot and its parts are manufactured, and the team learns more about what does and doesn’t work.

And that goes along with each mechanism, the intake, the totes that were making, and something that also pulls trash cans because thats also a thing we have to do.”

This process is repeated throughout the team’s build season, which lasts six weeks from Jan. 4 to Feb. 17, after which they pack up their robot and do not touch it until their competition dates during the week before and after spring break. Within those six weeks, the team meets every day except Tuesdays and Wednesdays. Monday and Thursday meetings after school last until 6 p.m., on Fridays they last until 9 p.m., and on Saturdays they last from 9 a.m. to 6 p.m. Last year, the team collectively spent about 8660 hours working on their robot, 7091 hours of which were the total hours from the students and the other 1570 hours from the team mentors.

However, between September and December, when the team is not on their build season, they are busy learning and honing the skills they will need to build a successful robot during the build season. In those months, the members in their specific subgroups are given tasks and assignments by the team mentors that they must complete by the end of the first semester.

“In my sophomore year, I was tasked with building just one particular mechanism,” Valerio said. “I chose to make a mechanism that can make the robot grab a pole and pull up and climb so I had to learn a lot about how to CADD so I could design that part.” He then had to learn, through experience, how to strategize, design and prototype such a mechanism. “I had to manufacture it myself on the router, and unfortunately, it didn’t work,” Valerio said. “But I learned so much about how to design and how to manufacture.”

Similarly, the other team members had to complete assignments specific to the subgroup they specialize in. The prototyping team had to build a robot that could complete a challenge given to them by the team mentors, the lathe team had to lathe parts for a robot, and the programming team had to write programs that would allow a robot to carry out a specific task. “We all had smaller projects that reflected exactly what we would need to do during the build season, which helps train us,” said senior Julien Courtade. “We learn skills before we actually do stuff.”

In addition to learning from the team mentors and by experience, the robotics team members also learn from each other. “There are lots of different skills that the veteran members also teach the newer members, by guiding them or pulling them through,” Courtade said. “So we can be good cops and bad cops.”

Courtade believes that the months prior to the teams building season are helpful, and offer a challenging setting in which the team can learn and practice their skills without the pressure of competition. “You just learn from the mentors and the veteran members during those training weeks,” said Courtade. “Even though everyone always learns more during the season, we try to learn everything we can before showtime.”