The press gains a new medium 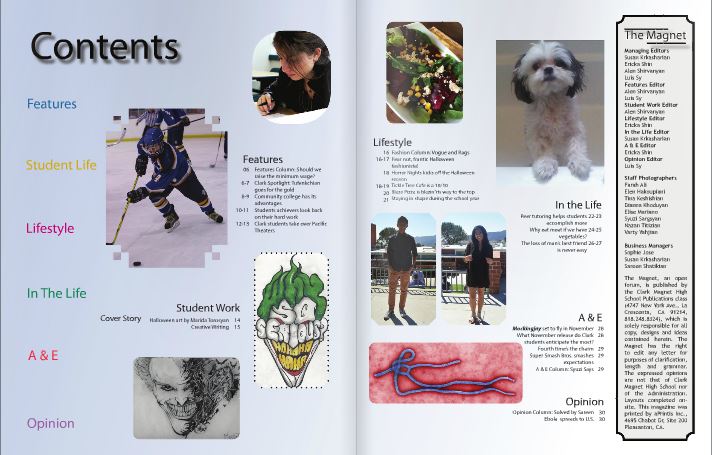 “Wow, I had no idea we even had something like this,” said Clark Magnet High School junior Dustin Hunt upon his first glance at the school’s publications website, The Clark Chronicle. “There’s actually some really good writers at our school,” Hunt said as he browsed through various student-written articles. With this website and Clark’s brand new magazine, the school is evolving with its publications/journalism-related ventures.

Hunt’s foray into society’s newer means of publications distribution is something many people are just now experiencing. For the longest time, schools across the country have been offering their students and faculty various forms of entertainment media created by students, whether it be articles they’ve written or pictures they’ve taken. These pieces began as simple articles that focused on only a small variety of topics and student-generated photographs, but as times changed, the means in which these students would be able to provide their audience with their great works.

Journalism-related courses at high schools have been around for decades and continue to flourish with impressive results. “When I started doing the school newspaper 22 years ago, we would have to stay at school very late, sometimes as late as 1 a.m. in order to physically cut the articles and paste them, using rubber cement, to large sheets of cardboards,” explained Hoover High School’s publications and journalism teacher Brian Crosby in an interview via email.

The processes that were once used to manufacture the ways in which people could examine the works of the students were much more tedious and difficult due to the technological capabilities at the time. However, creating these methods of viewing student works, such as the newspapers Crosby was referring to, has become far easier and has also led to new mediums of allowing students to express their passions for writing.

Quite recently, schools have begun hosting extensive websites in which students can upload article after article, never having to worry about producing too much work the way one would when constructing a newspaper. “With desktop publishing software, many hours have been saved in the process,” Crosby said. “If you are talking about new media such as websites and social media, at Hoover we are doing more original web work. In fact, all staff members are highly recommended to produce web work in addition to broadcast and print material.”

If you are talking about new media such as websites and social media, at Hoover we are doing more original web work. In fact, all staff members are highly recommended to produce web work in addition to broadcast and print material.”

This new medium of publishing work is a great convenience to students as they don’t have to wait a month or so to have their work included in a newspaper. Now, uploading content is as easy as a handful of clicks, and accessing the work is just as simple. Our very own Clark Chronicle is updated constantly by website editors Lilia Lamas, who uploads the writing itself, and Iren Harutyunyan, who uploads the pictures to go with the writing.

“For the school website, I put up finalized stories [class advisor] Mr. Davis sends to me and use social media to promote the website. I also submit stories to the Best of SNO website and change the poll every month or so,” Lamas said. (The SNO [School Newspapers Online] website Lamas referred to is the site that hosts the Chronicle as well as hundreds of other websites of schools not only in the United States but all around the world, from Canada all the way to Zimbabwe.)

Despite this being the first year for both editors, they managed to learn everything there is to know about updating the website immediately. “I do not have to put up every story on Twitter but I always end up doing that because I know how excited the students get when it is on the Twitter. They comment “omg it’s my story” and I get really happy for them,” Lamas said in talking about one of her favorite parts about her position.

“At some point, there may no longer be a printed version of a school newspaper,” Crosby theorized. Though the Internet has become the dominant method of viewing the content developed by students, plenty of schools, including Clark Magnet and Hoover High, still produce physical means of reading these works. However, just this year, Clark began experimenting with a new way of providing the school with the work created by its Publications class.

With the first issue having been released Nov. 3, Clark Magnet commenced with the production of a quarterly magazine, The Magnet. What distinguishes this magazine from the previous newspaper is its use of full color, its 32-page length, and its relevant topics, such as its arts and entertainments and hot spot sections. The seniors who dedicate hours of their time the operation are editors Susan Krkasharian, Ericka Shin, Alen Shirvanyan and Luis Sy.

Shirvanyan and his co-editors are responsible with creating the various layouts for the magazine’s pages, as well as selecting what kind of content will be used for the pages. Shirvanyan stressed how grateful he was for having such hard-working companions helping him assemble this magazine. “I think we’ve built a great process here and have a great foundation for creating this magazine,” he said.

Many students have responded positively to this new style of presenting student-created content, as it’s evidently much more intriguing than the newspaper which was largely black and white and less image driven. “I just now looked at it online and thought the layouts and use of color was impressive,” Crosby stated. “However, as a newspaper person, I prefer the way a newspaper is presented more than a magazine.”

Both the magazine and the Clark Chronicle website are read by many Clark students. Publications staff members say they are proud of their work. “Making these things for students to see really is a fun experience,” Lamas said. “Not only is it something I enjoy making and reading, but something I think others will really like too.”